A Single-Molecule Diode That Works

FLOW CONTROL
[+]Enlarge
Credit: Venkataraman group/Columbia U
A single-molecule diode consisting of a thiophene dioxide oligomer suspended between two gold electrodes (top and bottom) in contact with an ionic solution provides unprecedented control of current flow. C is blue, S is gold, and O is red. 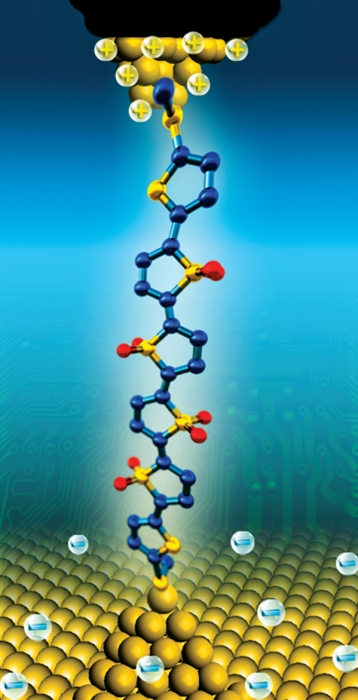 Credit: Venkataraman group/Columbia U
A single-molecule diode consisting of a thiophene dioxide oligomer suspended between two gold electrodes (top and bottom) in contact with an ionic solution provides unprecedented control of current flow. C is blue, S is gold, and O is red.

Forty years ago, scientists theorized that a single molecule could function as a diode—an electronic circuit element that allows current to flow in one direction but not the other.

Now, a team led by Latha Venkataraman and Luis M. Campos of Columbia University and Jeffrey B. Neaton of Lawrence Berkeley National Laboratory has demonstrated a simple way to make low-voltage, single-molecule diodes that perform extremely well (Nat. Nanotechnol. 2015, DOI: 10.1038/nnano.2015.97). In fact, their rectification ratio—a measure of how much current flows in one direction across the diode versus the other—is nearly 50 times as high as earlier designs.

In the ongoing push to make ever smaller and more powerful circuitry, researchers have demonstrated that various types of basic circuit elements crucial to today’s electronics can be miniaturized to the point that their functions are controlled by a single molecule. But single-molecule versions of diodes had remained elusive: Many had been made, but they tended to work poorly.

Those previous efforts had typically relied on asymmetric molecules featuring electron donor and acceptor moieties to control the direction of current flow. These diodes often had low rectification ratios and required a substantial voltage push to work at all. In contrast, the Columbia-Lawrence Berkeley team used symmetric molecules, thiophene dioxide oligomers, and instead induced asymmetry at the diode’s electrodes.

Specifically, the researchers suspended an oligomer between the tiny gold tip of a scanning tunneling microscope and a much larger gold substrate. By immersing the molecule-electrode junction in an ionic solution of propylene carbonate, a polar solvent, the team caused positive and negative ions to accumulate at the electrodes, thereby creating an asymmetric chemical environment around the circuit. Under those conditions, the diode worked extremely well. When the team replaced the polar solvent with an apolar one, the device did not work.

Noting that the data “show the rectification very clearly,” Northwestern University’s Mark A. Ratner says, “The results are impressive.” It was Ratner together with Arieh Aviram who first proposed single-molecule rectification on theoretical grounds 40 years ago. Ratner points out that this method’s reliance on a liquid would likely cause challenges when it comes to device application, however.

Gemma C. Solomon, a molecular electronics specialist at the University of Copenhagen, notes that part of the strength of this approach is that it does not require control over the orientation of the molecule in the junction. That simplification widens the scope of applicability of this approach, she says.

Claudio Verani (June 4, 2015 12:52 PM)
These are outstanding results for the field, and will unquestionably broaden the number of candidate molecules for this function.
It should be noted, however, that such a short report cannot make justice to the complexity of the issue. Due recognition should be given to the efforts made by many other groups that shaped the field, in particular to the research of Robert Metzger on probing experimentally the existence of unimolecular rectification proposed by Aviran and Ratner.