A New Dawn For CubeSats

The National Aeronautics & Space Administration launched two Dynamics Explorer satellites into low-Earth orbit in 1981 to probe the chemical and physical properties of the outermost layer of the atmosphere. Each of those orbiters was roughly the size of a refrigerator.

NASA researchers are now preparing for a similar, even more sophisticated, mission. Yet they plan to send up a satellite that’s the size of a large shoebox.

Ultimately, the team would like to create a global network of these small satellites to better understand our planet’s interaction with “space weather”: sun-driven showers of charged particles and flurries of intense electromagnetic radiation. Such a network would allow researchers to better forecast when space weather could interrupt or disable electrical and communication systems on Earth. 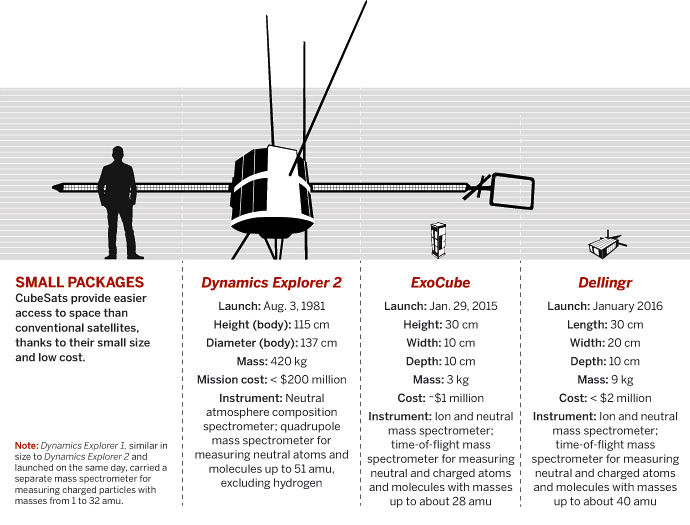 For now, the team is starting with one small satellite, named after the Norse god of dawn, Dellingr (pronounced dell-in-jur). The scientists and engineers hope the project will launch a new way of doing science at NASA.

Confronted with a stagnant budget, the agency is looking to slash costs but not the quality of its research. This has prompted some teams to think outside the $100 million missions that in the past have relied on a single spacecraft armed with a battery of specialty instruments. These crews are turning to smaller platforms, such as boxy satellites called CubeSats, and off-the-shelf electronics.

Researchers think the new approach will enable them to devote more of their resources to creating a select few instruments that will pay the greatest scientific dividends. 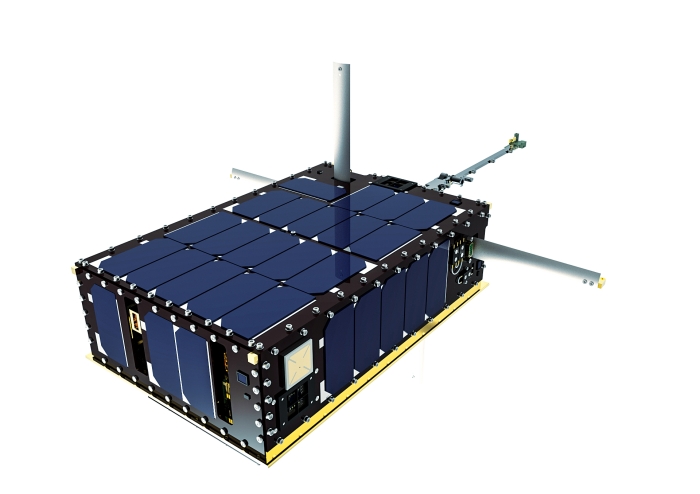 “When groups are constrained by cost, they have to become more innovative and resourceful without overengineering,” says Peter M. Hughes, chief technologist for NASA’s Goddard Space Flight Center in Maryland.

To be a viable, orbiting space-weather station, Dellingr needs to be cheap, small, and quick to build. The Dellingr team isn’t trying to make the Cadillac of satellites, Hughes says. They’re focused on trying to deliver a working satellite in about a year.

CubeSats are natural platforms for this mission. The first CubeSats, built in 1999, were developed by professors so that students could work with the orbiters and send them into space. The 10-cm-wide cubes were capable of piggybacking on rockets that were part of larger missions, meaning they could launch for a fraction of the cost of traditional satellites. CubeSats have largely remained in academia, but NASA has recently started working to incorporate the satellites into its research.

When Dellingr launches, likely in mid-2016, it may prove to be NASA’s most ambitious CubeSat mission on record. Six times the size of the first CubeSats, Dellingr will be carrying a new breed of scientific instruments developed for the platform.

Dellingr’s scientific centerpieces are a miniature mass spectrometer and a newly designed magnetometer system. These complementary tools are meant to map the chemical composition and the electromagnetic profile of Earth’s outer atmosphere. With these data, scientists will study how the planet’s interface with space—known as the exosphere—responds to the incessant, but dynamic, influx of particles and radiation from the sun. 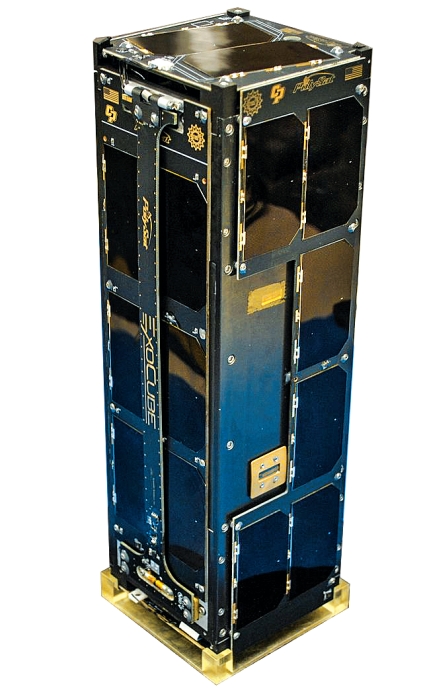 Credit: NASA/CAL POLY
Excocube will carry the first mass spec into exosphere since 1981.

Scientists have developed computer models to study these interactions, but they’d also like to measure them. Because conventional satellites are so expensive to launch, the exosphere hasn’t been the subject of many direct studies, NASA physicist Sarah L. Jones says.

And, thanks to its updated technology, NASA’s new CubeSat is equipped to make measurements that have never been made before.

In fact, the Dynamics Explorers represent the last mission to make the type of in situ measurements NASA has planned for Dellingr. That mission, launched more than 30 years ago, cost hundreds of millions of dollars. NASA officials estimate that Dellingr’s price tag will be less than $2 million.

For instance, the ion and neutral mass spectrometer (INMS) will enable the first direct measurements of hydrogen in the upper atmosphere, says Jones, who helped develop the time-of-flight instrument. It will also measure the concentrations of ionized and neutral atoms and molecules with masses up to that of argon.

The instrument should easily be able to distinguish each of the particles it is designed to measure, according to Marcello Rodriguez, instrument engineer, and Nikolaos Paschalidis, payload manager, researchers on the INMS team at Goddard. The team could confirm this as soon as Jan. 29, when an early version of the INMS is scheduled to launch aboard a satellite called ExoCube.

ExoCube is a CubeSat built by California Polytechnic State University in collaboration with the University of Wisconsin, Madison; the University of Illinois, Urbana-Champaign; and Scientific Solutions Inc., a company that develops technology for atmospheric and planetary research. The National Science Foundation is helping fund its launch.

In addition to the INMS, Dellingr boasts a new magnetometer system, a combination of miniature magnetic sensors and noise-filtering software. Conventional satellites use boom arms that are meters long to keep magnetic gauges away from magnetically noisy flight systems and electronics, according to Eftyhia Zesta and Todd M. Bonalsky, the NASA researchers who developed the new magnetometers. The team is testing two of their sensors inside Dellingr’s body—essentially on top of the noise generators—which could prove to be huge for future small satellite missions, Zesta and Bonalsky tell C&EN.

“Magnetic field measurements around Earth are the most fundamental measurements you can make,” Zesta says. “They tell you a lot about our surrounding space environment.”

Robert J. Twiggs did not foresee CubeSats flying scientific missions when he first invented them along with Jordi Puig-Suari of Cal Poly more than 15 years ago. “For us, they were educational,” says Twiggs, who is not involved with the Dellingr project and is now a professor of space science at Morehead State University, in Kentucky. “I don’t think either one of us thought they would end up being used like this.” Twiggs, like the Dellingr team, is excited to see what’s next for miniature satellites.

“Dellingr is about more than putting a product on a bench. Dellingr is about developing systems and processes in ways we haven’t tried before,” says Michael A. Johnson, chief technologist for Goddard’s Applied Engineering & Technology Directorate. Although the team’s approach won’t be appropriate for every NASA mission, he says, lessons learned from Dellingr could certainly be scaled up to do big-picture, NASA-class science.

Researchers may be starting small, Johnson says, but “we’re not watering down the questions we want to answer.”