A look at recent patenting activity in fracking technology, brought to you by C&EN and CAS

ON THE UP
[+]Enlarge
The number of patents filed on new fracking strategies and additives has been climbing in recent years. SOURCE: Chemical Abstracts Service

The number of patents filed on new fracking strategies and additives has been climbing in recent years. SOURCE: Chemical Abstracts Service

In recent years, hydraulic fracturing—better known as fracking—has been a boon to oil and gas companies. The technique injects fracking fluid—typically made of about 90% water, 10% particulate matter, and less than 1% chemical additives—down into wells, fracturing shale deposits underground and releasing oil and natural gas. But fracking is not without its problems. To address issues such as low well productivity and environmental impact, scientists are now investigating, and subsequently patenting, improved additives for fracking fluids and greener extraction strategies. As seen in Chemical Abstracts Service databases, patents claiming improvements to fracking have grown steadily in recent years. Here, we focus on a handful of them. 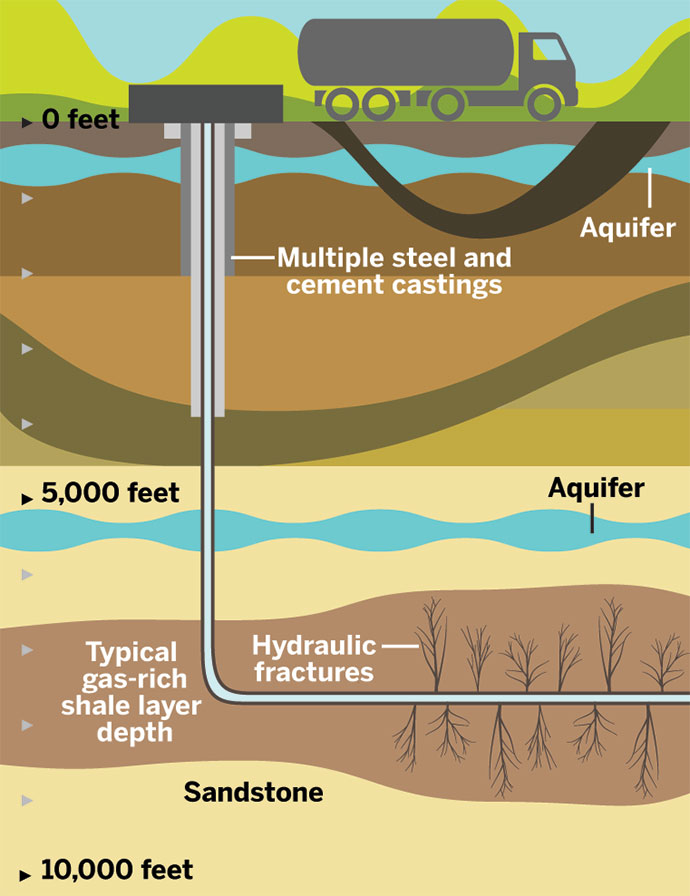 In newly fractured wells, initially high oil and gas production rates usually drop quickly, to less than 20% of first-day rates. Jens Emil Vindstad and coworkers at Statoil Petroleum have patented a technique to address this problem. They claim that higher-than-normal fracking temperatures cause additional fracturing of underground shale deposits, decreasing the viscosity of trapped hydrocarbons and pyrolyzing kerogen to create recoverable hydrocarbons (WO 2014207108). Kerogen, typically left behind by most fracking operations, is a mixture of high-molecular-weight hydrocarbons present underground in solid form. Statoil carries out its process in two stages: The first stage uses temperatures in the range of 250 to 450 °C to reduce the solid high-molecular-weight kerogen to low-molecular-weight hydrocarbons. The second stage, which uses lower temperatures, then flushes out all the available hydrocarbons from the shale.

Biodegradable Polymers Leave No Residue Behind

During fracking, operators force fracking fluids carrying proppants such as grains of sand or particles of aluminum oxide down wells to shale deposits. The proppants, which prop open fractures in the shale, get injected into those fractures with either high-pressure fluid or high-viscosity fluid. Plant-based thickening agents such as cellulose and guar gum are among the chemical additives that help increase fracking fluid viscosity. Sometimes though, bacteria growing in the fracking fluid cause premature breakdown of polysaccharide bonds in these thickening agents and the fluids lose viscosity. In a 2014 patent (WO 2014099191), Denton Sorrells from Schlumberger Technology claims that plant enzymes can prevent this premature breakdown. Sorrells suggests that a family of proteases, specifically cysteine proteases, is highly effective at protecting cellulosic thickening agents. They disable bacteria by selectively cleaving cellulases that decorate the microbes’ outer membrane, he says. It’s these cellulases that attack polysaccharide bonds. Not only do the plant enzymes work, the author contends, they’re economical: Many cysteine proteases can be easily extracted from plants and are commercially available.

Fracking can leave behind chemical residue. Scientists at DaniMer Scientific, now a part of Meredian Holdings Group (MHG), have been trying to solve the issue. In a recent patent, Steve Wann discloses a group of degradable polymers that impart a particular viscosity to fracking fluids, helping to transport proppants to shale deposits and create fractures (US 20140274820). The polymers—made from starting materials such as lactic acid and glycolic acid—are biodegradable, so they leave no residue after fracking, the patent claims. “These biodegradable polymers have drastically reduced the chemical and equipment footprint compared to current fracturing methods,” says Phil Van Trump, chief technology officer at MHG. The new approach costs less, making it practical to recover more oil or natural gas, Van Trump contends.

Share X
To send an e-mail to multiple recipients, separate e-mail addresses with a comma, semicolon, or both.
Title: Patent Picks: Fracking Technology
Author:
Chemical & Engineering News will not share your email address with any other person or company.