SIMILARITY SCIENCE
Credit: Hospira
A video from Hospira, now part of Pfizer, that explains the relationship of biosimilars to biologic drugs in terms of structure, function, clinical, and safety aspects and how these relate to the approval and use of biosimilars.

The first U.S. biosimilar drug has been on the market for just two months. Called Zarxio and made by Sandoz, it’s a copycat version of Amgen’s white-blood-cell stimulant Neupogen.

But Sandoz, the generic drug unit of Novartis, has already filed for approval of another follow-on product, this time taking on the anti-inflammatory Enbrel. And that filing is one of at least five that have been made under Food & Drug Administration guidelines in effect since 2010, according to the market research firm Datamonitor.

The Canadian generic drug firm Apotex filed for FDA approval of biosimilars of Neupogen and its long-lasting version, Neulasta. Hospira, now part of Pfizer, is awaiting the go-ahead on a follow-on version of the red-blood-cell stimulant Epogen and a biosimilar of Remicade that it developed with partner Celltrion.

Overall, more than 50 biosimilars are in development in the U.S., and about 20 Phase III trials are under way or completed, Datamonitor says. These trials target many of the same high-value drugs, in particular six blockbuster antibodies. 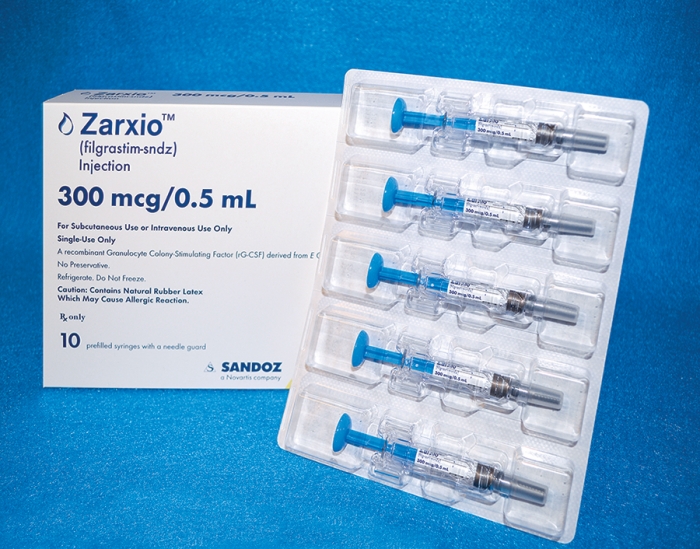 Over the next five years, leading biologics with combined U.S. sales of nearly $26 billion per year will face biosimilar competition. It’s uncertain, however, how much of that market biosimilar developers will gain. The amount they can chip away from originator firms depends upon several unknowns, including the number of competitors, prescribing rates, and pricing.

Unlike small-molecule generics, for which prices can drop by 90% compared with the original drug, biosimilars are expected to cause less price erosion and take longer to do it.

High development and manufacturing costs for complex biologics are likely to limit price cuts. Drawing on Europe, where biosimilars have been sold since 2006, market watchers estimate that U.S. prices on average will be 25–35% below those for brand-name drugs. Sandoz reportedly launched Zarxio at a 15% discount.

“There is a wide range of potential cost savings that is dependent on the regulatory environment and how favorable it is for competitors to enter,” says Ameet Sarpatwari, a doctor and lawyer with Harvard Medical School’s Program on Regulation, Therapeutics & Law. Prices also depend on the negotiating power of buyers, who tend to be insurers in the U.S. and governments in Europe. Nevertheless, cost savings will be “very, very significant” for U.S. patients who face cost-sharing burdens for high-priced biologics, Sarpatwari adds.

More competitors mean bigger price drops, but questions around market uptake are preventing some firms from getting involved, he says. Reimbursement, postmarket surveillance, and an untested patent resolution process are concerns.

Doctor and patient acceptance also matter. Although research on biosimilars is limited, it’s known that about 25% of each group considers small-molecule generics to be below the caliber of brand-name drugs, he adds. 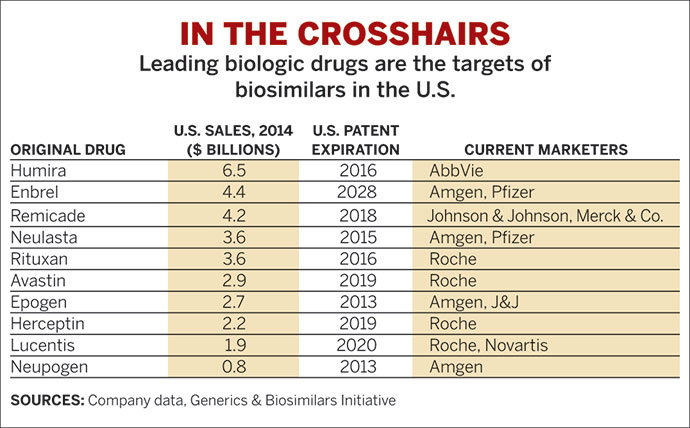 Also influencing attitudes is FDA’s failure so far to provide guidance allowing biosimilars to be substituted for brand-name drugs, as can be done with small-molecule generics. “Uncertainty as to what manufacturers would have to do to demonstrate interchangeability is really one of the barriers for the follow-on biologics market,” Sarpatwari says.

He argues that Europe’s experience provides enough evidence for FDA to make a decision. Whatever interchangeability guidance the agency ultimately provides, Sarpatwari expects biosimilar developers to be able to meet it. One wrench is that some states are countering moves in this direction by restricting substitution.

Beyond regulatory issues, technical challenges loom. A high level of development work is required to create, produce, characterize, and clinically test biosimilars. As a result, many companies getting involved—including Amgen, Merck & Co., and Novartis—are biologics innovators themselves.

A major exception is Roche. Rather than developing biosimilars, the Swiss firm is so far competing by developing new products or next-generation versions of biologics such as Rituxan and Avastin.

AbbVie’s anti-inflammatory antibody Humira, the biggest-selling biologic in the U.S., is another prime target of biosimilar makers. It will lose patent protection in 2016. AbbVie, however, predicts that biosimilar competition won’t appear until about 2020.

Because of continued market expansion, sales of Humira are predicted to grow 4% per year, keeping it in the top slot until 2020, according to the market research firm EvaluatePharma. But other leading biologics will experience single-digit sales declines as new biosimilars emerge in the U.S. at a rate of two to six per year.