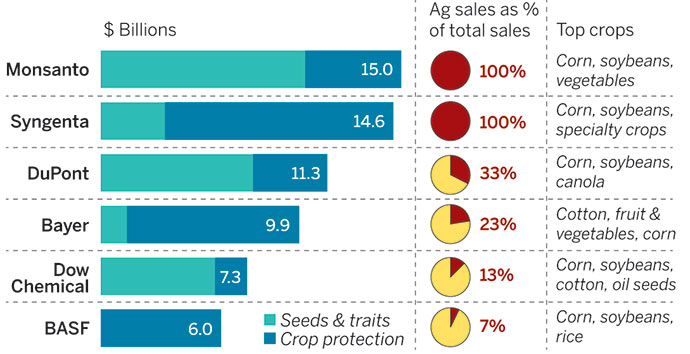 Repositioning by top companies has put the agchem business in flux. NOTE: Results are for calendar-year 2014, except for Monsanto, which is fiscal 2015. SOURCES: Companies, C&EN calculations

Third-quarter results for the chemical industry show firms are struggling to sell products in the face of weak global growth, cheap oil, and a strong dollar. Those with agriculture businesses have particular problems, and at least two firms—Dow Chemical and DuPont—are considering deals to solve them.

Sales withered as inexpensive energy put downward pressure on prices and lackluster demand dampened volumes in many businesses. Low crop prices made for an unusually bleak season for agriculture at Dow, DuPont, and BASF. And chemical executives say they expect this climate to continue, possibly through 2017.

At Dow, sales sank by more than 16% to just under $12 billion compared with the year-ago quarter. For the most part, the decline was a result of much lower prices. In agriculture, volumes also decreased 5%. Business in Latin America, particularly Brazil, was plagued by low prices for crops, high chemical and seed inventories, and currency headwinds.

But despite those problems, Dow beat analyst expectations, raising earnings 11.5% to $959 million, thanks in large part to demand for certain high-margin specialties. The hot products included plastics for packaging; elastomers; materials used in construction, semiconductors, and automobiles; and ingredients for personal care products. Demand was particularly strong in China, Europe, and India.

According to Dow CEO Andrew N. Liveris, changes are coming—including a potential sale of the firm’s agriculture business. “An attractive opportunity to release value may be upon us,” Liveris said in a conference call with analysts. He is also looking to reshape some joint ventures—by cashing out of some of Dow’s Kuwaiti deals and potentially buying Corning’s share of the Dow Corning silicones joint venture.

Those moves would be positive for shareholders, according to David Begleiter, a stock analyst at Deutsche Bank. “The acquisition of Dow Corning would expand Dow’s specialty portfolio while offering substantial cost synergies,” he wrote in a note to investors. He expects Dow to divest its agriculture business within 18 months.

One potential buyer might be DuPont, though it is unclear what kind of appetite interim CEO Edward Breen has for a larger footprint in the farm market. “If we have something that will create significant value for our shareholders moving forward, we will seriously be looking at it,” Breen said in a conference call with analysts.

He repeated a remark first made by Liveris that “everyone is talking to everyone” about potential deals in crop protection. Indeed it has been just two months since agriculture giant Monsanto ended a protracted attempt to buy European rival Syngenta.

Like Dow, DuPont faced broad-based sales declines from lower prices in the quarter. Despite the price drag, DuPont increased earnings in electronics chemicals, industrial biosciences, and nutrition and health. But the headwinds in agriculture, particularly in Brazil, hammered both its top and bottom lines. Overall, sales declined 17.5% to $4.9 billion, and earnings dropped to $131 million from $331 million in the prior year.

Breen promised to trim capital spending from its current level of $1.5 billion. In addition, he plans to reduce administrative spending.

At Huntsman Corp., titanium dioxide and capital spending are both on the chopping block. Though sales were down only slightly at the specialty materials firm, currency effects helped drag down earnings by almost 22% compared with last year’s third quarter.

The firm reiterated plans to spin off its titanium dioxide business or pursue another strategy for it. CEO Peter Huntsman also pledged to cut $150 million in capital expenditures over the next two years and buy back an equivalent amount of company stock.