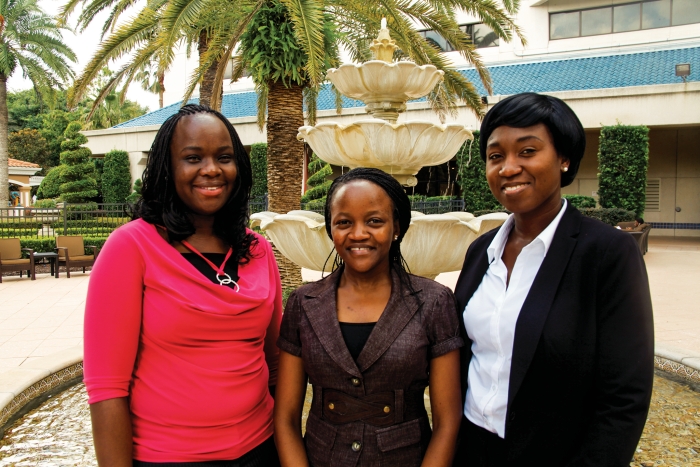 Credit: Jeff Huber/C&EN
Onjiko (center) met Oyugi (left) and Narh, both of UT Arlington, for the first time at this year’s NOBCChE conference.

Rosemary Onjiko knows what it feels like to belong to a community. Growing up in Kisumu, Kenya, Onjiko had a support system that extended well beyond her immediate family. “In Kenya, they always say that the child belongs to the village,” Onjiko remembered. “So basically you have your whole village raise you.”

In late September, Onjiko experienced a similarly supportive community when she attended her first meeting of the National Organization for the Professional Advancement of Black Chemists & Chemical Engineers (NOBCChE, pronounced no-buh-shay) in Orlando. At the start of the conference, Onjiko, a Ph.D. chemistry student at George Washington University, met another Ph.D. chemistry student, Eugenia Narh, from the University of Texas, Arlington, during a leadership training workshop for minority women. Upon hearing Onjiko’s background, Narh couldn’t help but think of introducing Onjiko to one of her UT Arlington colleagues, Mercy Oyugi, who was also from Kenya.

Onjiko and Oyugi struck it off as soon as they met one another and discovered that not only did they share the same home country, but they also spoke the same dialect. “It’s so funny. I mean, who would have known the next Kenyan I would meet was from the same ethnic tribe I come from?” Onjiko marveled. “What are the odds I was going to meet someone like that?”

Stories of fortuitous encounters, such as Onjiko and Oyugi’s, have been happening at NOBCChE ever since its inception in 1974. According to Narh, the annual conference’s track record of facilitating connections stems from the wide swath of friendly faces, both familiar and new, who attend year after year. “It creates an atmosphere where you hang out with people who you know already,” she said, “but at the same time, it’s a safe space to get to know other people.”

Hundreds of minority chemists and chemical engineers took advantage of this collegial atmosphere at the 2015 conference, participating in events such as a career fair, professional training workshops, and technical sessions in which students presented their research (see page 42). And with a conference theme of “Bridging Generations through STEM,” or science, technology, engineering, and mathematics, a particular emphasis was placed this year on the interaction between young attendees and their more established counterparts.

Educational sessions provided one such opportunity for fostering a dialogue between veteran and burgeoning scientists. During a session titled “STEM’s Impact on 21st-Century Forensic Science,” for instance, representatives from academia and federal agencies such as the Drug Enforcement Administration and the National Institute of Standards & Technology discussed what it takes to scientifically aid criminal investigations.

“Everyone always feels like you have to have a forensics degree to go into forensics science, and that is not true,” said Candice Bridge, an assistant professor at the University of Central Florida’s National Center for Forensic Science. “The thing with forensic science is it’s all about the science,” Bridge argued, noting that a basic understanding of chemistry, biology, and instrumentation goes a long way toward building the background needed to work in a crime lab.

That message resonated with Ashley Taylor, a graduate student at Louisiana State University who had planned to pursue a career in cosmetic chemistry upon graduation. The forensics session left Taylor wondering if she should consider a different career path. “It had an impact to the point where now I’m talking with DEA and NIST about their forensics programs and how I get my foot in the door,” she said.

Established scientists also had an impact on the middle and high school students who attended NOBCChE’s STEM Weekend, which included a science fair and science bowl quiz competition. The weekend’s events kicked off with remarks from Samesha Barnes, director of the University of Florida’s Ronald E. McNair Scholars Program, which provides financial assistance to low-income undergraduates belonging to underrepresented minority groups. Barnes spoke about her transformation from a bashful child into a Ph.D. materials scientist and how a love of STEM combined with hard work got her to where she is today. “That geeky, somewhat shy person could also very easily be any of you,” Barnes told the crowd of young attendees. “STEM opens doors. It opened doors for me, and it can open doors for you.”

Barnes’s message struck a chord with Imani Fuller, a member of Team Phoenix, a group of Atlanta middle schoolers competing in the science bowl. “The part that was inspirational to me was when she said how it’s okay to be a nerd,” Fuller said. “You don’t have to follow the path of everyone else. You can follow your own path.”

George Washington University’s Onjiko can relate to looking to more senior members of the NOBCChE community for guidance. After all, Onjiko’s mentor, a scientist at DuPont who was previously involved with the organization, was the one who initially suggested that the Kenyan graduate student attend the annual conference. And now that she’s experienced the conference firsthand, Onjiko can understand why her mentor encouraged her to attend.

A look at a few of the more than 100 student-led research presentations at this year’s conference, which provided young scientists with a friendly training ground for public speaking. 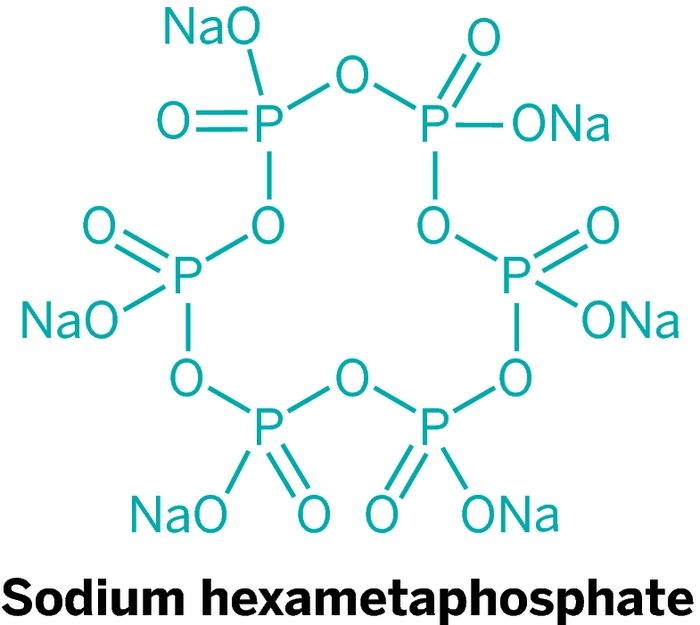 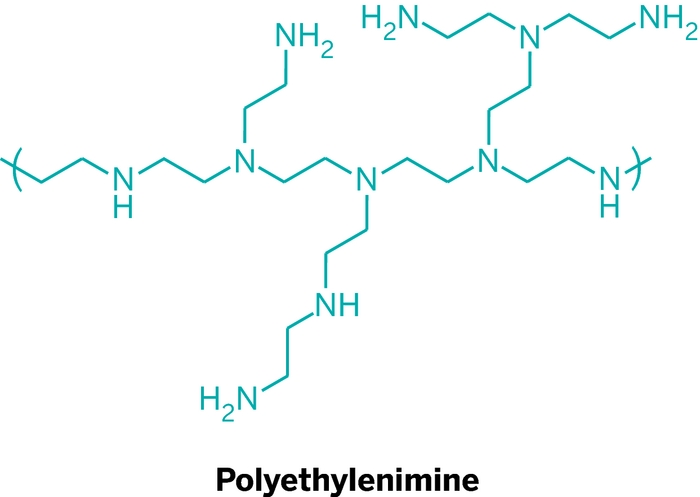 Clothing made of cotton and synthetic fibers such as polyester are valued for their breathability and durability. “Unfortunately, they are highly flammable,” said Merid Haile, a grad student in Jaime Grunlan’s group at Texas A&M University, during a technical session on green chemistry and engineering. To minimize cotton-synthetic blends’ flammability, textile makers often treat them with toxic and persistent organohalogen flame retardants. Looking for a safer alternative, the team combined two environmentally friendly, water-soluble polymers—polyethylenimine (PEI), a polycation, and sodium hexametaphosphate, a polyanion—to create a nontoxic polyelectrolyte coating that protects fabric (Polym. Degrad. Stab. 2015, DOI: 10.1016/j.polymdegradstab.2015.01.022). The team dipped fabric treated with this coating in an acid buffer, protonating the PEI amines and strengthening the polycation-polyanion attraction. Fabric treated this way was durable enough to withstand rinsing and showed improved flame retardancy over coated fabric not dipped in an acid buffer. This greener alternative to organohalogens results in a weight increase of only 20% over untreated cotton-synthetic blends, Haile said.

Gabriel Draper belongs to a team of renewable energy researchers who are trying to improve the viability of building solar panels with copper electrodes. During a technical session on process and chemical engineering, the University of Louisville Ph.D. candidate noted that isolating the elemental copper needed to build these electrodes is currently very difficult. That’s because extracting the element from copper compounds requires working under vacuum to ensure that copper doesn’t oxidize and become electrically insulating. To avoid the need for vacuum, the team developed another method for recovering elemental copper from copper nitrate hydroxide (ACS Appl. Mater. Interfaces 2015, DOI: 10.1021/acsami.5b03854). After combining Cu2(OH)3NO3 ink with a reducing agent of either fructose or glucose, the team exposes the mixture to a flashlamp, and intense pulsed light emitted from the lamp heats the ink-monosaccharide nanoparticles. The resulting sugar decomposition by-products prevent the formation of copper oxide, thereby facilitating the isolation of elemental copper. “It’s sweet research,” Draper quipped.

Nanotubes Fail To Sniff Out Methane 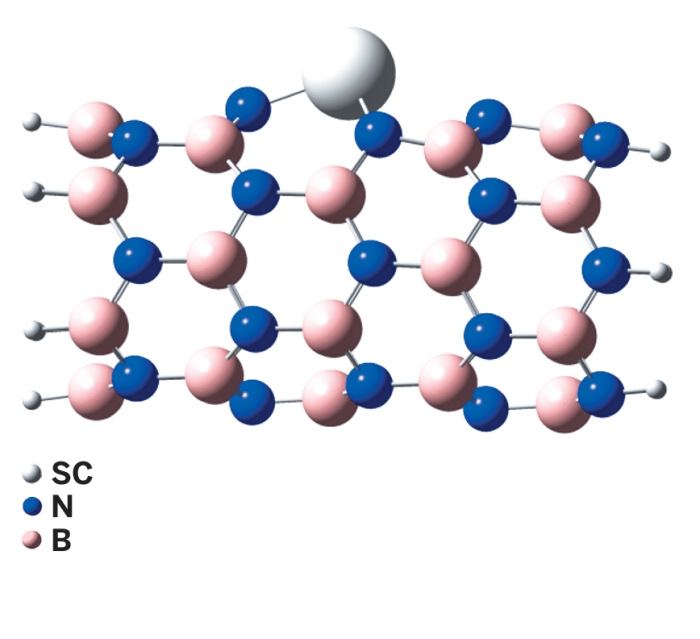 Not all research presented at NOBCChE concerned positive experimental results. During a technical session on polymers and nanoscience, Christopher Copeland discussed his attempts to create a new methane detection method. The graduate student at Mississippi’s Jackson State University had been curious whether boron nitride nanotubes (BNNTs) could be used to sense CH4 leaks from pipelines and elsewhere that can result in the loss of a valuable fossil fuel as well as pose environmental and safety threats. Copeland had a hunch that BNNTs could serve as a methane detector given that carbon nanotubes, a structural analog of BNNTs, can be doped with transition metals to create CNTs that generate an electrical current in the presence of gases such as ammonia. To test this theory, Copeland modeled an interaction between CH4 and BNNT doped with the transition metal scandium using the computational chemistry method of density functional theory. Unfortunately, the doped material’s methane adsorption energy per molecule decreased as the number of methane molecules present increased, rendering the Sc-doped BNNTs impractical for real-world application. Moving forward, Copeland wants to see whether BNNTs doped with other transition metals serve as a better electrical conductor in the presence of CH4. “The final result may have been negative, but it’s leading me down a path for further investigation,” he told C&EN.

Education
New international students cannot enter US for online-only programs
Education
Chemistry-style fun and games
Undergraduate Education
Block plan compresses one class into a few weeks for deeper learning
Share X
To send an e-mail to multiple recipients, separate e-mail addresses with a comma, semicolon, or both.
Title: The NOBCChE Community
Author: Jeff Huber
Chemical & Engineering News will not share your email address with any other person or company.