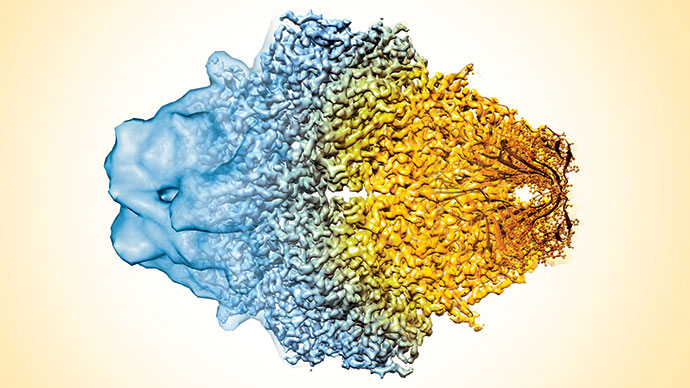 Credit: Sriram Subramaniam/NCI
This composite image of the protein β-galactosidase shows how cryo-EM has progressed over the years, from the indistinct blobs once obtained with the technique (left) to the nearly 2-Å-resolution structures possible today (right).

The king and queen of protein structure determination have, for years, been X-ray crystallography and nuclear magnetic resonance spectroscopy. But now there’s a challenger to the throne. This upstart is cryo-electron microscopy (EM).

Cryo-EM’s ability to tackle samples that can’t be crystallized has allowed it to provide structures that the reigning methods have been slow to crack. Meanwhile, the march toward ever-more-powerful computing has edged this technique closer to atomic resolution, producing detailed structures that reveal every nook and cranny of a molecule. Within just the past three years, improvements in electron detector technology have yielded an explosion of high-resolution structures. As cryo-EM comes into its own, it is guiding drug development, revealing surprising protein interactions, and more.

In standard electron microscopy, scientists shine a beam of electrons through a sample and then, on the other side, detect the electrons, which have been deflected by the material and now carry the information needed to generate an image of the sample. Because electrons have a much shorter wavelength than visible light, they can illuminate the structure of tiny objects. But the electron beam can destroy delicate molecules and tissues. “It’s intrinsically damaging,” says Sriram Subramaniam of the National Cancer Institute’s Center for Cancer Research. “The game is, ‘How do you get enough information before you damage the molecule?’ ” Using lower doses of electrons helps, but this leads to fuzzy, low-resolution images.

This is where the “cryo” part comes in. Freezing samples, typically to liquid nitrogen temperatures, protects them from the beam’s radiation, and it shields biological samples from dehydration in the electron microscope’s vacuum chamber, preserving their structural integrity. Perhaps most important for structural biology, however, cryo-EM samples don’t need to be crystallized. Not only can crystallization be difficult, or in some cases impossible, but it also may favor nonnative conformations of a biological molecule, delivering a structure that is an inaccurate representation of its arrangement in nature. 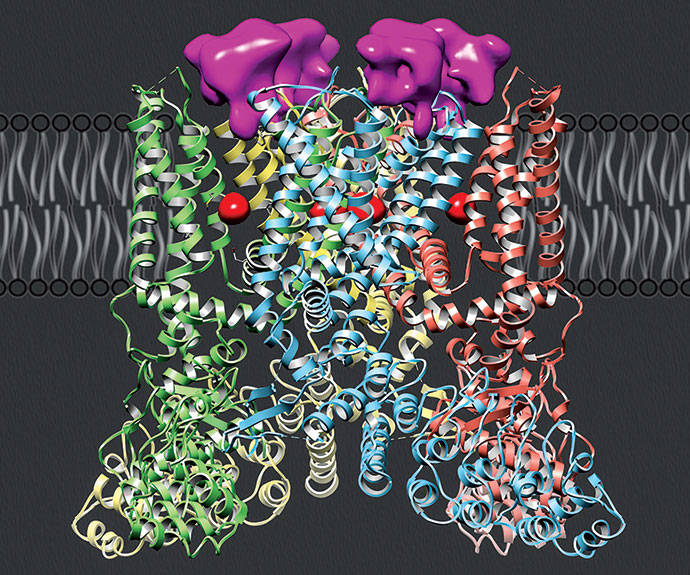 What has made it possible to get high-resolution structures without crystals is single-particle analysis. In principle, it shares some similarities with crystallography, says Yifan Cheng of the University of California, San Francisco. With crystallography, the scientist collects data from a vast array of molecules, all oriented in the same manner. The signal from each individual molecule’s structure adds to the next, reducing noise and increasing resolution. Single-particle analysis also combines information from many particles—whether proteins, complexes, or whole viruses—to generate a high-resolution, three-dimensional map. The difference is that instead of the alignment coming from a crystal lattice, an algorithm figures out the alignment by sampling tens of thousands of the entities of interest, frozen in place.

These particles are oriented randomly with respect to the electron beam, so the microscope collects images of the particle from all possible vantage points, gathering information on each of the particle’s facets. Sophisticated algorithms sort through the data and perform an alignment to determine how each of the individual images is oriented relative to the rest of the images. “The better we can align them, the higher resolution we can get,” Cheng says. Once the right alignment is determined, the algorithm computes the structure of the species from multiple images, which add together to provide the best possible structure.

Over the years, gradual progress in computational power and microscope quality has yielded higher and higher resolution structures. Up until the past few years, most cryo-EM structures clocked in at well above 10-Å resolution, about the size of an amino acid. Between 2002 and 2012, only 14 structures determined by EM crossed the 4-Å threshold, dipping a toe in high-resolution territory. But a true breakthrough came in 2012 when a new toy—the direct electron detector—opened the gates, allowing for a flood of high-resolution cryo-EM structures. In 2014 alone, 27 structures have reached sub-4-Å resolution, and scientists keep pushing the boundaries. “The direct electron detector has been the biggest game changer for the electron microscopy field,” says Melanie D. Ohi of Vanderbilt University.

Previous detectors—film or charge-coupled devices—were either labor-intensive or offered limited resolution, but the direct electron detector is better on both fronts. It relies on complementary metal-oxide-semiconductor (CMOS) technology, which is widely used in today’s cell phones and cameras. The CMOS technology uses thinner materials, which produce less electron backscatter and thus less noise in the images.

A big advantage of the technology is that it detects electrons fast enough to capture an electron movie instead of just snapping a picture. When electrons hit a frozen cryo-EM sample, the ice can interfere with electron movement and blur the image, Cheng says. “To overcome that, you take a movie; then every frame has a very short exposure time, and each frame has a clear picture.” Then these movie frames are combined into a single, information-packed image.

The other advantage of the moviemaking approach to single-particle analysis, according to Ohi, is that you can pick and choose the best frames to make your structure calculation. The later frames, she says, tend to be of lower quality because the radiation has already ravaged the sample. “You can discard those later parts of the movie when you do the structure calculation,” Ohi says, but still use them to calculate the alignment, which doesn’t require super clear images. 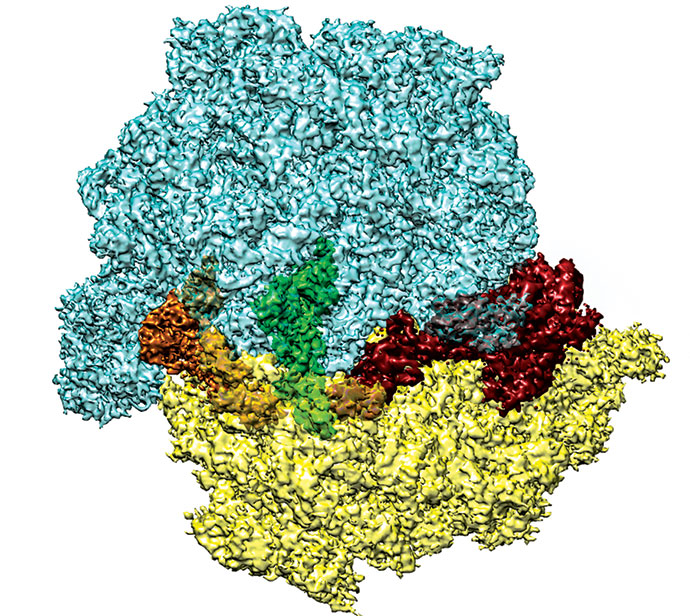 With these improvements, biologists are racing to put long-standing biomolecule challenges on ice and see what they look like. Teams have captured the protein shell of the measles virus, for example, the first in the family of RNA viruses that includes rabies and Ebola. Cheng’s team has solved a 3.4-Å structure of TRPV1, an ion channel that propagates pain signals, including those from chili peppers. The structure revealed an unexpected triggering mechanism for the receptor, and researchers hope it will reveal ways to treat pain and inflammation.

Membrane proteins like TRPV1 are notoriously difficult to crystallize, so cryo-EM is particularly exciting for this category of molecules, Ohi says. Cryo-EM also has the ability to resolve the structure of complexes of molecules—such as a ribosome in the midst of synthesizing a protein. These new applications may help resolve long-standing questions about how antibiotics or other drugs work.

Cryo-EM has traditionally worked best with large and/or symmetric structures, such as viruses and the ribosome. Symmetric molecules are easier for the computer to align, and large particles produce greater signal intensity. However, with the latest advancements, cryo-EM can now tackle smaller and less symmetric molecules.

In one example, Subramaniam’s team recently solved the structure of a relatively small protein, β-galactosidase, to a resolution of 2.2 Å. At that resolution, the water molecules bound to the protein are visible. This unprecedented resolution could help evaluate drug candidates, Subramaniam says. “Water molecules often play a role in drug interactions.” He and his colleagues got this structure, Subramaniam says, by optimizing every aspect of the process, from the microscope to the calculation. And Subramaniam plans to go even further, by continuing to sharpen all the steps in the process, to really see how far one can push cryo-EM into the high-resolution arena.

But record-breaking resolution isn’t the only goal. “Even though there is a revolution going on in cryo-electron microscopy, with resolutions below 5 Å, there will still be a lot of structures that are above that level,” Ohi says. “They’re still valuable structures, just fuzzier.” Cryo-EM will bring a lot of structures from a resolution of 30 Å down to 8–12 Å, she says, which will reveal the structures of DNA and RNA, as well as protein substructures.

Even a fuzzy cryo-EM image of a ribosome helped scientists decades ago to understand how this molecular machine turned genetic information into proteins. So while bagging high-resolution structures is exciting, Ohi says, their main focus is answering important biological questions. Yet, there is a palpable excitement about the discoveries scientists will make with a slew of new high-resolution cryo-EM structures of molecules, just now being seen for the first time in such exquisite detail.

Comments
Raji Heyrovska (October 5, 2017 7:17 AM)
Cryo-crystallization sounds great! I would like to ask: When water freezes into ice, it expands. Wouldn’t it affect the structure/configuration of the biomolecules and other solutes in frozen aqueous medium? The hydration sphere and the hydrogen bonds will have different dimensions in the frozen state and hence would not the configurations of the dissolved or dispersed molecules be different in the frozen state than at normal room temperatures?
Reply »