New Probes By Chemical Safety Board On Hold 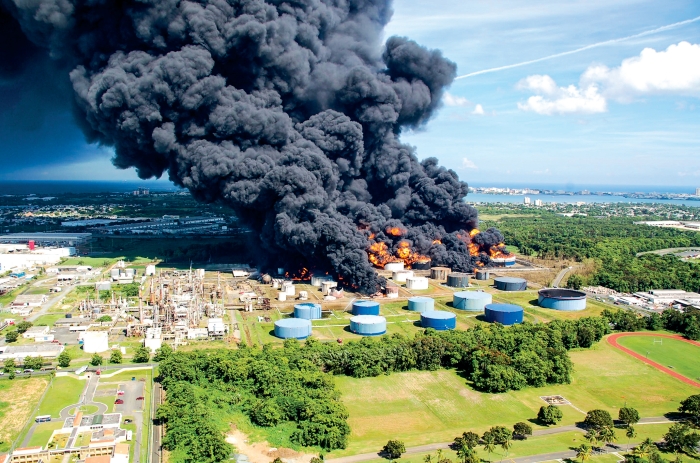 Through the end of 2015, the Chemical Safety & Hazard Investigation Board (CSB) will focus on completing six delayed accident investigation reports, allowing for a reboot of the troubled agency, says Chair Vanessa Allen Sutherland. A better-managed and a more open, public, and transparent board will result, she says.

The changes, Sutherland says, will help the board overcome fundamental problems and will ease pressure from CSB’s critics—particularly members of Congress.

Sutherland announced the changes at a CSB meeting in October to discuss a long-delayed report of a 2009 accident at the Caribbean Petroleum terminal in Puerto Rico.

The board approved the report on a split vote, which is unusual. Board members usually negotiate in private and appear unified in public. The few times disagreements have gone public they centered around recommendations in reports for significant regulatory changes, as was the case in the Caribbean Petroleum document.

Also unusual was that each of the four CSB members attending led a portion of the meeting. The appearance of shared responsibility was in contrast to past claims by critics in Congress that the board had been dominated by then-chair Rafael Moure-Eraso and his top lieutenants. The congressional charges ended with the forced resignation in March of Moure-Eraso and, in June, the removal of the board’s two top staffers, who remain on paid administrative leave.

By the end of 2015, Sutherland says, she will overhaul board management and, in the meantime, will halt new investigations. If carried out, her plan means that 10 months will have passed since the board initiated its last investigation—of an accident in February at an ExxonMobil refinery in Torrance, Calif. Pushing CSB to conduct that accident probe were two California Democrats in the U.S. House of Representatives.

Sutherland tells C&EN that CSB, with 40 employees, lacks the resources to launch new probes. “If we deploy to new accidents, we have to pull multiple people off multiple investigations, stalling progress on unfinished reports,” she says. “Instead, we are on an aggressive timeline to complete ongoing investigations.”

However, accidents continue, and on Oct. 30, a high school lab accident in Virginia sent five students to area hospitals, two of them in serious condition (see page 6). The accident was identical to several that CSB has investigated and publicized in the past, and several organizations urged CSB to initiate a probe. So far, the board has not.

Sutherland’s goal is to have all pending investigation reports completed next year, most in the first quarter of 2016. In the future, she says, the board will aim for an 18-month turnaround from the time of the accident to issuance of the final report. That may be a challenge given the mismatch between the large number of accidents meeting CSB’s criteria for triggering an investigation and the modest resources Congress provides to investigate them.

Sutherland notes that CSB’s $11 million annual budget has been flat for a decade. Consequently, she says, the board will up its budget request for next year. She has not given specifics about the increase.

In addition to financial challenges, operation of the small board is hampered because its two top executives are missing. General Counsel Richard Loeb and Managing Director Daniel Horowitz were placed on paid leave by CSB member Richard Engler during a brief period this summer when Engler was CSB interim chair. This occurred before Sutherland was confirmed as chair by the Senate.

After congressional investigations alleged misconduct by Loeb and Horowitz, Engler signaled he would investigate the charges.

Two attorneys in a law firm with no association with CSB are conducting that probe, Sutherland says. She adds that she urged them to finish their work by the end of October. However, the attorneys’ report must go to the law firm overseeing the investigation for review and recommendations before it lands on Sutherland’s desk.

Horowitz and Loeb, in the meantime, remain on administrative leave. Horowitz, seeking to get his job back, has engaged Public Employees for Environmental Responsibility, a nonprofit whistle-blower organization, to file a complaint for him with the federal government.

Jeff Ruch, executive director of the whistle-blower group, warns that Horowitz and Loeb could be left in limbo through 2015 and perhaps longer if they appeal the decision.

“At some point someone—and it is not clear who—will have to decide whether the facts the investigators have found amount to misconduct and what the appropriate punishment should be,” Ruch says.

Meanwhile, Sutherland emphasizes that the board will keep moving, pointing to the approval of the report on the 2009 accident at the Caribbean Petroleum terminal. That investigation and report, CSB staff say, were delayed in large part by employee resignations during tumultuous times in recent years at the board.

The Caribbean Petroleum incident occurred at a shuttered oil refinery that had been turned into a large fuel supply depot and terminal in Puerto Rico. As gasoline was off-loaded from a tanker ship to an onshore tank farm, a 5 million-gal aboveground storage tank overflowed into a secondary containment dike. The gasoline pooled in the dike, vaporized, and ignited. The blast, fire, and multiple secondary explosions damaged 17 of the 48 on-site petroleum storage tanks and off-site neighborhoods and businesses. Fires burned for 60 hours.

The blast created a pressure wave registering 2.9 on the Richter scale, damaging some 300 homes and businesses up to 1.25 miles from the site. There were few injuries, however, and no one was killed in the midnight accident.

The report says the U.S. has 4,810 similar petroleum bulk stations and terminals. About 3,800 of these facilities reported a leak in 2012. Nearly 3,000 of these leaking sites are within 1 mile of communities with more than 300,000 residents.

A combination of safety shortcuts, inadequate maintenance, and equipment failures caused the accident, CSB concludes. In addition to specific facility improvements, the report recommends that this facility and others like it be treated as “high hazard” facilities. This change would require analyses similar to the Environmental Protection Agency’s risk management program and the Occupational Safety & Health Administration’s process safety management requirements.

This recommendation was opposed at the October meeting by industry representatives and by CSB member Manuel Ehrlich. Ehrlich introduced a substitute recommendation that called for no regulatory changes and, instead, better enforcement of existing regulations. His plan was shot down 3 to 1 by other board members.

Calls for tougher regulations have frequently been a sore point for the board, triggering disagreements among members, safety advocates, and the regulated industry. It’s sure to remain so as Sutherland navigates new waters for the board. The success of her decision to delay initiating new investigations while the board charts a fresh direction in the end will depend on workplace and political issues the board cannot control.

Consumer Safety
Do we know enough about the safety of quat disinfectants?
Lab Safety
Adapting hijabs for lab safety
Industrial Safety
US Chemical Safety Board praises Airgas for its response to 2016 fatality
Share X
To send an e-mail to multiple recipients, separate e-mail addresses with a comma, semicolon, or both.
Title: New Probes By Chemical Safety Board On Hold
Author: Jeff Johnson
Chemical & Engineering News will not share your email address with any other person or company.