A Vibrant Sector Shines In Madrid

ONE STEP BEYOND
[+]Enlarge
Credit: Rick Mullin/C&EN
FIS introduced its new spray-drying service and a commitment to offering more than active ingredients. 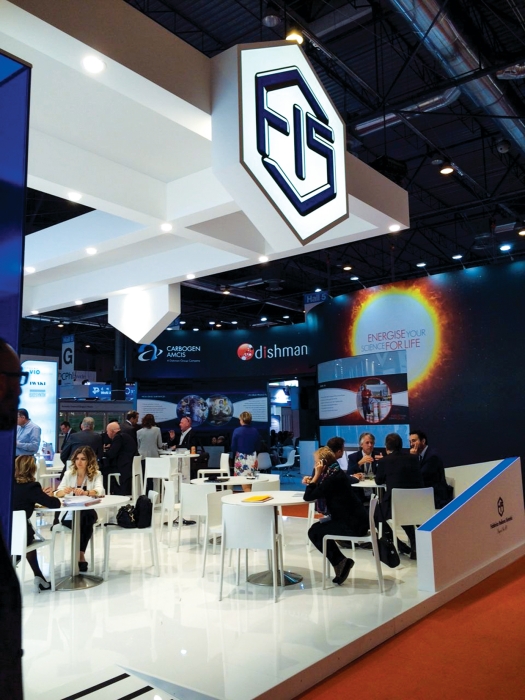 Of the myriad slogans adorning booths at the CPhI exhibition in Madrid last month, one succeeded in capturing the main theme of the annual pharmaceutical chemical event.

The Italian firm Fabbrica Italiana Sintetici (FIS) heralded expansion beyond its main active pharmaceutical ingredients business by saluting attendees with “Beyond the API.” Anodyne as it may seem, the phrase sparked contention among some of FIS’s neighbors in Hall 5 who asserted that they moved beyond the API first.

FIS’s second pitch, “A Great Company Never Stops Growing,” stirred little controversy. But it stated a subtheme to the event. Even the companies that are not, like FIS, introducing downstream manufacturing services are expanding their core operations. Rolling into a fifth year of steady growth, the pharmaceutical chemical sector is plowing money into the ground to keep ahead of demand from drug industry customers.

FIS is building a new facility on one of the last open spots at its headquarters near Vicenza, Italy, according to Giuliano Perfetti, the firm’s vice president of business development. The $50 million plant is expected to come on-line later this year, expanding capacity for high-potency APIs and introducing spray drying as a service.

The company is maintaining its focus on complex small molecules, Perfetti said, but sees spray-drying, a method of coprecipitating API with a polymer to improve bioavailability, as a formulation service in growing demand as new drugs become increasingly complex.

Across the aisle, Hovione, which claims to have pioneered spray drying as an adjunct to API production, was talking up a planned doubling of spray drying capacity at its site in New Jersey—part of an overall $25 million expansion there. The company, which already operates a huge spray dryer in Cork, Ireland, said at CPhI that it will add another dryer at its headquarters in Loures, Portugal.

Guy Villax, chief executive officer of Hovione, explained that bulking up capacity in anticipation of future projects is key to offering spray drying as a service. “We cannot not have the capacity,” he said. “We can’t operate too tight on capacity, and we have to have a constant flow of investment.”

Hovione also announced at the convention that it is going further downstream into final-dose manufacturing with the $10 million acquisition of a tableting plant over the fence from its facility in Loures.

In a step beyond the API, Griffiths said Carbogen has finished construction of an antibody-drug conjugate plant at its headquarters in Bubendorf. With it the firm will have the capacity to manufacture not only the potent compound—or warhead—but also the linker that joins it to the antibody. It will also conjugate the three pieces.

Carbogen’s European operations are now more closely tied to Dishman’s API plants in India and China, Griffiths said. He sees a global operation linking Asia to Western Europe as a strong approach to serving the market despite the recent trend away from wholesale manufacturing in China and India.

“We are seeing a lot of our customers more comfortable with certain parts of Asia than others,” he said. “Some won’t work in India, others not in China. But Dishman has a big presence in both places and can cover most customers’ preferences. Essentially, the link between doing the development in Switzerland and transferring manufacturing to a lower-cost environment in Asia is working well.”

Talk of drug manufacturing moving back from Asia to the West has become commonplace at industry exhibitions, and the vague references echoed through the halls once again in Madrid. There was also evidence that some Indian and Chinese companies are weathering the trend and adapting to new costs and regulations that have narrowed the advantages of outsourcing to these countries.

In India, SAI Life Sciences is gaining recognition as a contract development and manufacturing organization. The 16-year-old company, based in Hyderabad, calls itself a preferred supplier to five major drug companies. According to Marcel Velterop, chief commercial officer, the company emphasizes drug development services with an R&D staff of more than 600.

The rise in complex chemistry in pharma pipelines is resulting in a “stress in capacity and resources” in labs across the industry, Velterop said. This stress is only intensified by recent voluntary guidelines for the manufacture of drug substances. ICH Q11, issued by the International Conference on Harmonisation of Technical Requirements for Registration of Pharmaceuticals for Human Use, a European standards body, goes beyond the medicinal performance of an API to consider physical, chemical, biological, and microbiological properties that span drug development and product formulation.

“The industry needs more hands on the bench,” Velterop said, “and ICH Q11 will have a profound impact as a barrier to entry.”

SAI is currently bulking up the manufacturing side of its business. Having doubled capacity to 150 m3 at its factory in Bidar, India, the firm plans to add another 100 m3 by the end of 2016.

With annual revenue of about $70 million, SAI is gaining recognition in the pharmaceutical chemistry market, Velterop said, noting that one of the company’s preferred supplier contracts is with a Japanese firm and that another of its clients is on track to bring a drug to market in 2017. But SAI is also battling a perception problem in the wake of warnings the U.S. Food & Drug Administration has issued to Indian manufacturers in recent years.

“The negative news about India is hurting us in general,” Velterop said, “because very few people in the world have a nuanced view” of the quality of India’s API production.

Another Indian firm, Piramal Healthcare, also is working to disassociate itself from the bad news on quality and safety compliance in India. The firm recently published a study concluding that most such incidents involve generic drug makers rather than research and manufacturing service firms. The study cites misinterpretation of regulations and a lack of training and quality systems as the cause of compliance failures. 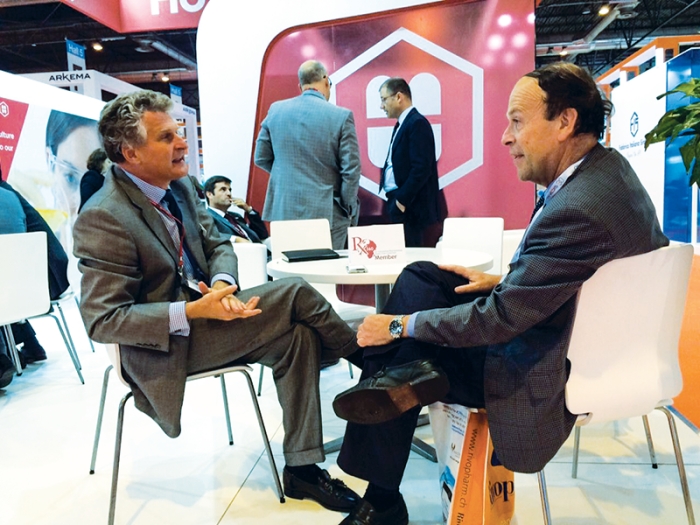 Like SAI, Piramal emphasizes research services to support drug discovery. Mark Cassidy, president of API services, said the firm has doubled the size of its discovery services operation in Ahmedabad, India. At the opposite end of the drug development spectrum, Piramal has expanded a facility in Lexington, Ky., where it pursues clinical trial and commercial manufacture of sterile injectable drugs.

Commenting on the continued investment in the sector, Enrico Polastro, a pharmaceutical chemical consultant with Arthur D. Little, shrugged his shoulders. “There seems to be a bit of optimism—enthusiasm that all the problems are solved, but I would not say so. There are still a high number of participants, and everybody is doing more or less the same thing.”

He pointed to signs that the “biotech bubble” may be bursting. Indeed, biotech stock indexes have dropped sharply since the summer. “You will make a correlation between the fortunes of the biotech index and contract manufacturers,” Polastro said, dismissing the notion that the sector’s extended upswing signals an end to its fundamental cyclicality.

Despite the near-complete exit of large conglomerates from pharma chemicals, the field remains attractive to midsized chemical firms. For example, SK Biotek, the pharmaceuticals chemicals division of South Korean conglomerate SK Group, plans to triple its API manufacturing capacity by 2020. The $50 million first phase will double capacity by 2017, according to JunKu Park, CEO of SK Biotek.

SK was established in 1962 as a petrochemical company. It launched its pharma chemical operations in 2000, Park noted, initially making an intermediate for an HIV drug. It built a second plant in 2002, where it made an intermediate for Pfizer’s cholesterol-lowering medication Lipitor. By incorporating flow technology, the company seeks to distinguish itself from competitors in an industry that mimics its customers in its commitment to batch production.

Likewise, Johnson Matthey, the U.K.-based catalyst specialist, is moving to raise recognition of its growing fine and pharma chemical business, which it amassed over the years through several acquisitions.

A year ago, the company acquired a former GlaxoSmithKline plant in Annan, Scotland. Johnson Matthey now makes APIs at two sites in the U.K. and four in the U.S. “But we are not recognized for the scale or scope of our operations,” said Nicholas Johnson, marketing manager for the division. “There are some things in our rebranding strategy to simplify how we position ourselves to our customers.”

Among other firms touting expanded operations at CPhI was the Swiss firm Dottikon, which is spending $100 million over the next three years on a multipurpose API facility, a separate API drying facility, and laboratory space. Another Swiss company, Cerbios-Pharma, recently acquired a particle-size engineering plant that uses supercritical fluid technology.

Preparedness was the general justification for adding capacity, but CPhI attendees acknowledged signs of a reckoning on the horizon, including a drop in venture capital funding of small biopharma companies.

“I remain cautious,” Carbogen’s Griffiths said. “We all know in this industry, no matter how bullish we are when talking to each other, that forces outside our control—bankers, Russia, China—can impact us in some way, shape, or form. Things can go south real quick.”