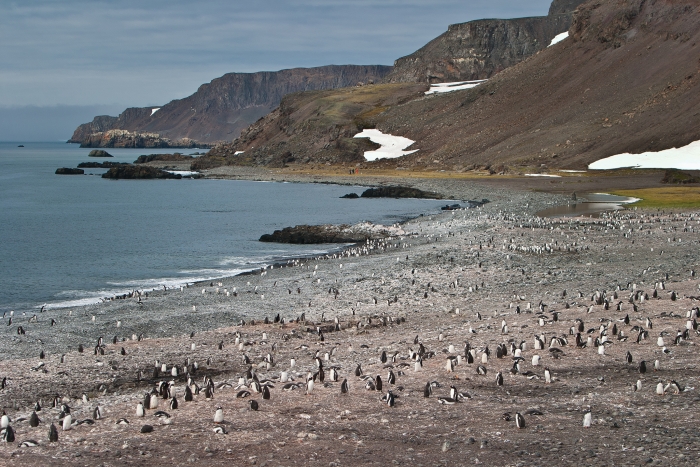 Cyclic volatile methylsiloxanes give many personal care products, such as cosmetics, skin lotions, and deodorants, a smooth feel and allow them to dry quickly. But scientists have been scrutinizing the compounds for potential toxicity, endocrine disruption, and bioaccumulation in the environment. Now, for the first time, researchers have found traces of these compounds in soil, plants, phytoplankton, and krill in one of the world’s most isolated regions: Antarctica (Environ. Sci. Technol. 2015, DOI: 10.1021/es503697t).

The Environmental Protection Agency is currently assessing one compound, octamethylcyclotetrasiloxane (D4), for environmental hazards including reproductive toxicity. Because they are volatile, these methylsiloxanes can easily escape to the atmosphere. Previously, scientists hadn’t worried too much about their impact on remote ecosystems because they figured that hydroxyl radicals in the atmosphere would degrade these compounds before significant amounts could deposit there.

But after Marinella Farré and her colleagues at the Spanish Council for Scientific Research found that siloxanes were more abundant in relatively pristine ecosystems in the Pyrenees than they had expected, her team decided to examine whether the contaminants had also reached remote regions of Antarctica.

So in 2009, the researchers took samples of soil and plants from more than 10 locations on the South Shetland Islands, north of the Antarctic Peninsula. They also sampled phytoplankton and krill from 11 locations in the waters around the islands, taking precautions to reduce sample contamination and to account for any methylsiloxanes introduced accidentally by the researchers.

Back in the lab in Spain, the team extracted the collected compounds and analyzed the samples using gas chromatography with tandem mass spectrometry. Almost all the field samples contained cyclic volatile methylsiloxanes—including D4, which manufacturers have phased out of many personal care products, as well as decamethylcyclopentasiloxane (D5) and dodecamethylcyclohexasiloxane (D6), which are still commonly found in the products. The highest concentrations of cyclic volatile methylsiloxanes found in the samples were similar to those found in soils and fish in rural areas in North America and Europe.

The researchers hypothesize that these compounds are scrubbed out of the atmosphere by falling snow, and then make their way into the ecosystem when that snow melts in summer. At sampling sites with lower salinity, where melting ice provided freshwater, phytoplankton had higher total concentrations of cyclic volatile methylsiloxanes than at sites with higher salinity.

The presence of these compounds at significant concentrations in Antarctica is “certainly surprising and runs counter to what we would expect” based on what’s known about the compounds’ sources, atmospheric transport, and deposition behavior, says Frank Wania of the University of Toronto. The work must be independently validated, he cautions, because it is extremely challenging to avoid contamination when measuring these compounds in remote environments.

The potential impact of siloxanes on Antarctic ecosystems is likely to be small, Wania says. However, he adds that the presence of synthetic compounds in such remote ecosystems is always undesirable: “If a compound is found there, it will be everywhere.”

Persistent Pollutants
CFC replacements are a source of persistent organic pollution in the Arctic
Atmospheric Chemistry
Study suggests that sea spray plays an important role in spreading perfluoroalkyl acid pollutants into the air
Environment
PCBs and other organic pollutants reach the deep ocean
Share X
To send an e-mail to multiple recipients, separate e-mail addresses with a comma, semicolon, or both.
Title: Siloxanes Unexpectedly Observed In Antarctic Soil And Marine Life
Author: Deirdre Lockwood
Chemical & Engineering News will not share your email address with any other person or company.