by Stuart A. Borman 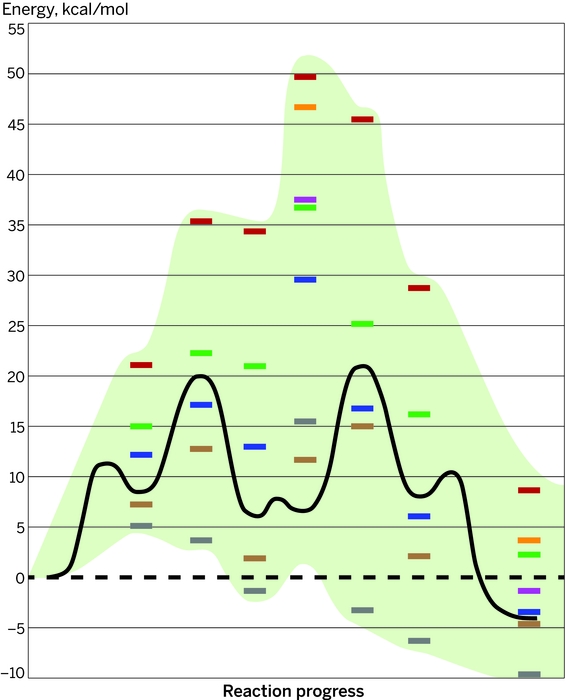 Chemists often use computational methods to predict reaction pathways and energies, but some researchers question their usefulness because the models sometimes produce highly variable, head-scratching results. Now, a detailed case study of a multistep organic reaction attacks the utility of computer modeling of that reaction in an unusually blunt way.

The authors conclude that the reaction mechanism is a simple one that undergraduates could guess and that a complex mechanism predicted by years of computational studies is “not even wrong”—so flawed and off-base that calling it incorrect is too kind.

The study by R. Erik Plata and Daniel A. Singleton of Texas A&M University focuses on the Morita-Baylis-Hillman (MBH) reaction, in which an electron-deficient alkene, a nucleophile catalyst, and an aldehyde react to form an allylic alcohol (J. Am. Chem. Soc. 2015, DOI: 10.1021/ja5111392). The researchers conducted a wide range of experiments to nail down the reaction’s mechanism and energetics conclusively for the first time.

Computational studies on the reaction have been “arguably more misleading than enlightening,” they conclude. “It is not clear to us that any reliably accurate information that was not already apparent from experiment could have been garnered from calculations.” The most notable theoretical prediction was that the reaction involves a complex “proton-shuttle” pathway, but experiments find the mechanism to be a simple acid-base process.

Experimental findings are often used to tweak theoretical predictions. In the absence of those tweaks, MBH reaction calculations “could have made an exceptional diversity of predictions, many of which would have been absurd,” Plata and Singleton write. They believe that’s what happened in the case of the proton-shuttle prediction.

Chemical theoretician Kendall N. Houk of UCLA says the paper “is full of profound insights, including one that astute computational chemists are all familiar with”—that they cannot currently use standard computational methods to predict some features of solution reactions. Theory, he says, “is still not capable, and may never be capable, of predicting what happens when many chemicals, four in this case, are mixed in solution.”

The study’s harsh verdict on theory is based only on an analysis of the MBH reaction. Nevertheless, theoretical “studies of complex multimolecular polar reactions in solution should be undertaken and interpreted only with extreme care,” the paper suggests. (See also C&EN, Aug. 15, 2011, page 36.)

Experimental chemist Tyler McQuade of Florida State University says the study “provides a call to arms for our community.” Experimentalists and theoreticians, he says, “need to continue developing methods and testing their veracity with a skeptical eye.”