Credit: ACS Nano
A fabric-based generator converts the energy from body motion into electricity to power electronics. The generator, which exploits the phenomenon behind static electricity, consists of two layers. One is a silver-coated woven textile (gray). The other is a textile decorated with zinc oxide nanorods (yellow) and coated with polydimethylsiloxane (blue).

Wrapped around a person’s wrist, a new foldable fabric patch can scavenge enough energy from arm movement to power small electronic devices (ACS Nano 2015, DOI: 10.1021/nn507221f). The fabric patch paves the way to clothing that can charge smart watches and cell phones while the wearer moves or walks around, the researchers say. 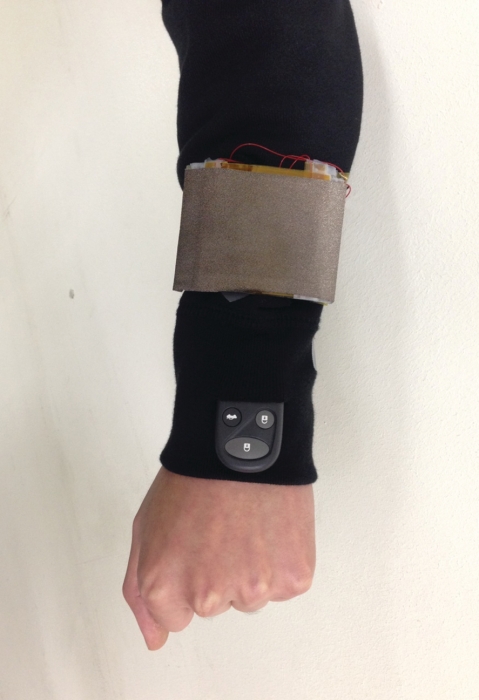 Credit: ACS Nano
A 4- by 4-cm textile patch attached to a jacket sleeve scavenges the mechanical energy produced by arm movements and turns it into enough electricity to drive a remote-control vehicle entry system.

As companies develop wearable electronics, such as sensor-laden clothing and smart glasses, they need equally portable power sources. Traditional batteries carry an environmental cost, so researchers are looking for flexible, lightweight generators that can convert mechanical energy into electricity.

The new energy-generating textile relies on the triboelectric effect, the phenomenon behind static electricity. When two dissimilar surfaces touch or rub against each other, electrons are transferred from one material to the other, causing one surface to build up a positive charge and the other a negative charge. When these oppositely charged surfaces separate, it creates a voltage, causing an electric current to flow.

Zhong Lin Wang of Georgia Institute of Technology, who was not involved in the study, built the first small generators that tapped into this mechanism to convert motion into electricity. Since then, he and others have made flexible triboelectric generators on polymer substrates that can power electronic devices such as light-emitting diodes (LEDs).

and his colleagues wanted to make more practical, wearable generators. So they created a double-layer fabric out of commercially available silver-coated woven textiles. They used a plain silver-coated textile as one layer. For the other layer, they grew 100-nm-wide zinc oxide nanorods on the woven textile fibers and then coated the rods with polydimethylsiloxane. The nanorods increase the contact area on this second layer, leading to greater friction between the two layers as they rub against each other. That effect boosts the power output of the device, Kim explains.

When the researchers compressed a 4- by 4-cm patch of the two-layer textile with a 98-N force and then released it, the fabric generated 120 V and a 65-µamp current. To increase the power output, the team stacked four triboelectric generators to make a device that put out 170 V and 120 µamp. The device is mechanically strong, and it maintained this output for more than 12,000 compression cycles, Kim says.

To demonstrate the technology, the team attached the four-layer generator on a jacket sleeve and embedded six LEDs, a small liquid-crystal display, and a keyless car remote control in the jacket. When the wearer moved his arms or wrists, the generator produced enough power to turn each gadget on one at a time.

The new triboelectric device is low cost and easy to make, and would be easier to incorporate into clothing than other energy-harvesting technologies such as solar cells, Kim says. His team is now testing new materials for the generator that could yield even more power. They are also exploring textile-based batteries and supercapacitors to store the energy from the generators, he says.

K.J. Smith (July 25, 2016 7:43 PM)
I am curious as to what this material's application could possibly be used for other than clothing? Could it be used to create wide lengths of material that could be used in factory belts to provide added electricity to mechanised systems within the factory? I have an idea that I am working on and am interested in a light weight, very strong material that would generate electrical energy through motion.
Reply »