[+]Enlarge
Credit: Shutterstock
Researchers think opossums are virtually immune to snakebites thanks to a single protein. 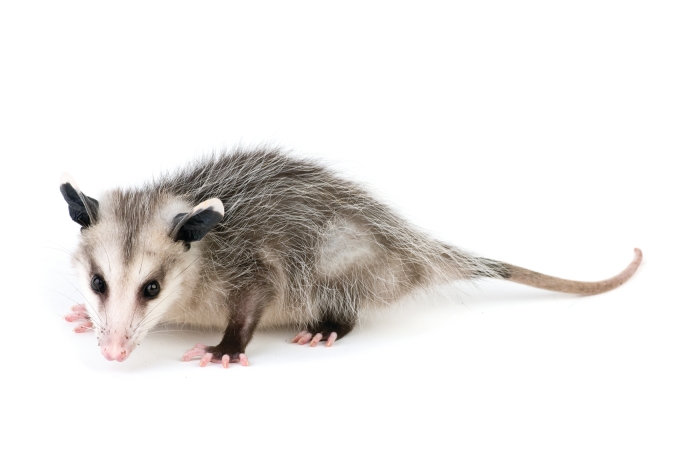 Credit: Shutterstock
Researchers think opossums are virtually immune to snakebites thanks to a single protein.

A simple peptide could save countless future snakebite victims in developing countries, researchers announced at the American Chemical Society national meeting in Denver. The antivenom relies on a sequence of just 11 amino acids, copied from an opossum protein.

[+]Enlarge
Credit: Shutterstock
The Russell’s viper is a common venomous snake in India. 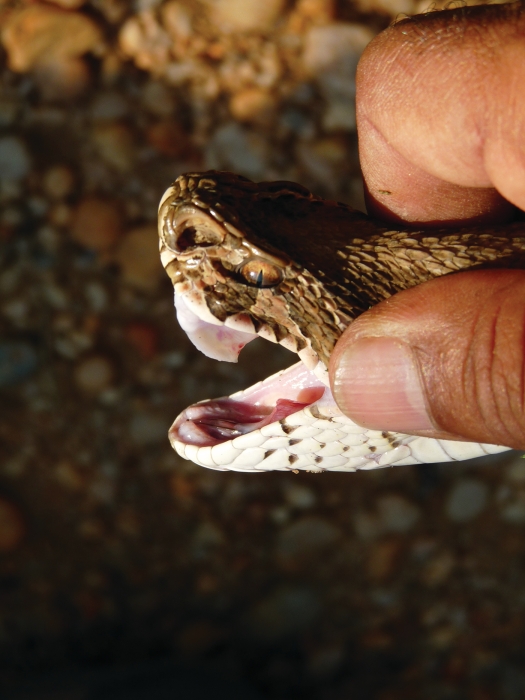 Credit: Shutterstock
The Russell’s viper is a common venomous snake in India.

Komives unveiled the antivenom candidate in a Division of Biochemical Technology session in Denver on Sunday. But the fundamental discoveries behind the findings were made nearly 20 years ago by a researcher named Binie V. Lipps.

Opposums have an innate immunity to a variety of snake venoms. Lipps isolated the protein responsible for this immunity and found that peptides containing its first 10 or 15 amino acids seemed to contain all of the protein’s antivenomous properties. She first patented the work in 1996.

It was widely ignored until 2012, when online news outlets stumbled on the opossum protein thanks to a blogger writing about the remarkable survival ability of opossums. Komives learned about the protein from Yahoo! News while searching for ideas for a research project that would allow her to work with a colleague in India while on sabbatical.

Although deaths from snakebites are incredibly rare in the U.S., they are surprisingly common in India. According to some estimates, snakes are responsible for 100,000 deaths in the country every year, Komives said, and rural areas, where snakebites are most common, don’t always have access to antivenoms.

Komives decided to try and develop a more inexpensive method for producing the natural opossum product and applied for a Fulbright scholarship.

Working with collaborators at the Indian Institute of Technology Delhi, Komives engineered Escherichia coli to synthesize peptides containing multiple repeats of the first 11 amino acids of the opossum protein. The researchers then use a protease to cleave at the final amino acid in that sequence to release the individual peptides.

Producing the peptides simply required ordering a plasmid and growing engineered bacteria, Komives said, but the team does need to optimize the peptide purification process. She estimates that once scaled up, companies could produce the peptides at roughly $1.00 per g.

Meanwhile, collaborators at the National Natural Toxins Research Center at Texas A&M University, Kingsville, have confirmed that synthetic versions of the 11-mer peptide protect mice against the hemorrhagic effects of venom from Russell’s viper (Daboia russelii), a common snake in India, and help mice survive exposure to rattlesnake venom.

Michael G. Thomas, a bacteriologist at the University of Wisconsin, Madison, and a chair of the session in Denver, said he was impressed by how much of an impact this simple peptide could make.

“The bottom line is the peptide clearly does something,” said Komives, who is working to establish a crowd-sourcing campaign to better understand its efficacy. “Somebody needs to be working on this.”

Biotechnology
The search for better antivenoms heats up as snakebites get renewed attention
Biotechnology
Scientists seek safer antivenoms for black mamba bites
Biochemistry
How an opossum protein may lead to a broad-spectrum snakebite treatment
Share X
To send an e-mail to multiple recipients, separate e-mail addresses with a comma, semicolon, or both.
Title: Opossum Peptides Could Provide Promising Antivenom
Author: Matt Davenport
Chemical & Engineering News will not share your email address with any other person or company.

Comments
Ram Bandi (March 24, 2015 9:21 AM)
I am Research scientist at university of Pittsburgh. It is very very interesting scientific information and thanks.

Ken Forbes Woodland, CA (March 25, 2015 2:53 PM)
Congratulations to Dr. Komives and the San Jose State team for showing the promise of such a practical application of genetic engineering for mankind in India and elsewhere. That's innovation at its best to save 100K lives/year. I hope to see an large-scale antivenom production via this proposed method and worldwide distribution very soon to those in need.
Reply »

gwenie Mugliston PhD, DVM, MSN (FNP) (March 25, 2015 3:44 PM)
I hope Binie Lipps is not forgotten in the effort. Had it not been for her, none of this would have come about. It is an absolutely wonderful application, no matter what.
Reply »

Claire Komives (April 10, 2015 1:23 AM)
You are right about Binie! I promise to not let her be forgotten! I think some of what she published is not accurate, but she definitely discovered an important molecule. -Claire
Reply »

Umar Ali (March 26, 2015 12:41 AM)
This development is amazing and unique therefore, congratulations to Dr. Komives and the co-wokers. However, a very quick feasibility study is needed for the compatibility and effectiveness of the antivenom to human body in the different continents of the world. This may increases the level of its acceptability round the Glob.
Reply »

Florence Nareetsile (March 26, 2015 11:51 AM)
This work will benefit the African continent as there are many deaths due to snake bites
Reply »

Ahmed Mohamed Ibrahim (April 30, 2015 6:22 AM)
Very interesting research. And congratulate to the team who achieve such a work. We hope to see it sooner in the market to save lives of many people in the world. May I suggest something? why not to extend an experiment like this for very lethal scorpion venoms.
I am a pharmacist and medicinal chemistry lecturer at University of Najran, Saudi Arabia, am a Sudanese citizen and some of my country village citizens suffer too much of a fatal type Scorpion bites.
Reply »