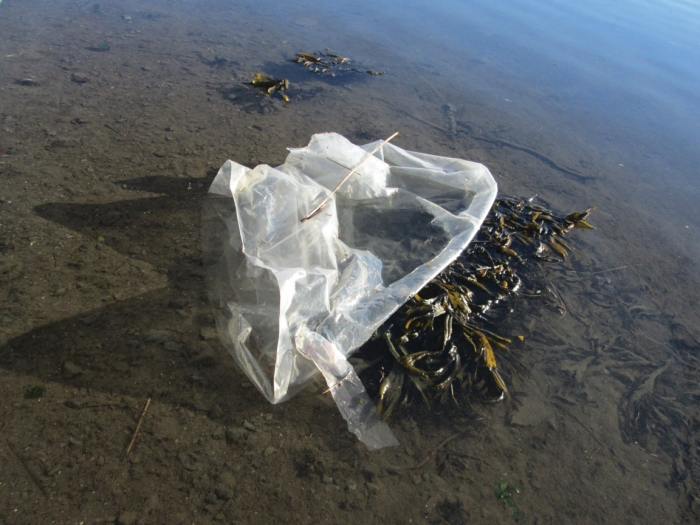 Credit: Dannielle Senga Green
A plastic bag litters a marsh near Dublin, Ireland, where researchers found that such bags can smother marine ecosystems trapped underneath.

Plastic bag pollution does not simply harm individual birds and mammals when they get tangled in the trash. It also can affect entire communities of wildlife, including invertebrates, according to a new study. Marshland sediments covered with plastic bags had far lower oxygen levels and numbers of organisms than sediments that remained bag-free (Environ. Sci. Technol. 2015, DOI: 10.1021/acs.est.5b00277).

Scientists have grown increasingly concerned about the marine impacts of plastics, ranging from plastic beads to films to bottles. But marine ecologist Dannielle Senga Green of Trinity College, in Ireland, noticed that few studies had examined plastic litter’s effects on whole communities of living things, especially muddy communities with organisms such as worms, snails, and crabs.

Plastic bags, in particular, can deposit in one spot, choking the ground underneath of sunlight, oxygen, and other nutrients. Green and colleagues wanted to test how severe these feared effects would be. So they studied a marsh near Dublin, where sediments serve as home to algae and a variety of invertebrates.

The team pinned down conventional high-density polyethylene plastic bags and biodegradable bags made from corn-starch in sediment plots in the marsh. After nine weeks, the team measured levels of oxygen, chlorophyll, and ions such as ammonium to understand how much the bags were sealing off the sediments underneath, and thus preventing the uptake and exchange of nutrients. Additionally, the team took sediment cores from each area to count the organisms there.

The researchers found that mud beneath both the conventional plastic bags and biodegradable bags had far fewer animals than in control plots—only about one-sixth as many in both cases. Also, some algae may have suffered, as concentrations of two key forms of chlorophyll, a and c, were half as high in sediments under both bag types as in bagless plots.

And the bags were starving the sediments of oxygen. Based on redox potential measurements, oxygen levels were far lower in the plots covered with bags. Also, ammonium levels were more than twice as high in the bag-covered plots; in the presence of oxygen, microbes convert ammonium to nitrates and nitrites, so higher ammonium levels suggest anoxic conditions.

The effects under conventional bags were troubling enough, Green says. But one reason the effects were so similar under biodegradable bags: They hadn’t degraded. As a result, plastic bags, even biodegradable ones, could harm marshes. Green warns that it’s unclear how plastic bags might affect other types of ecosystems and habitats.

Scientists had long feared that plastic litter could seriously harm other organisms besides highly treasured birds, seals, and turtles, says Melanie Bergmann, a marine ecologist at the Alfred Wegener Institute for Polar & Marine Research, in Germany. “Now we finally have data to prove this point.” She agrees that this study is only the beginning. For example, a lot of plastic debris may settle on the seafloor and end up in sensitive ecosystems like coral reefs. Bergmann and her colleagues plan to do similar experiments in deep Arctic waters.

Pollution
Mercury makes it deep into marine trenches
Environment
Floods can flush microplastic pollution from rivers into the sea
Environment
Seabirds eat plastic pollution because it smells good
Share X
To send an e-mail to multiple recipients, separate e-mail addresses with a comma, semicolon, or both.
Title: Plastic Bags Cut Wildlife Populations In Marshland Ecosystems
Author: Puneet Kollipara
Chemical & Engineering News will not share your email address with any other person or company.

Comments
Michael F. Bloom (April 17, 2015 11:03 AM)
It's unfortunate that a product which has been developed to perform a necessary function (carrying items) is environmentally harmful because of improper disposal or lack of recycling. So, we have to develop a biodegradable product that is more costly, less functional, and may end up creating some other unforeseen problem.
Reply »