Business: Trian comes up short in its bid to unseat four DuPont directors 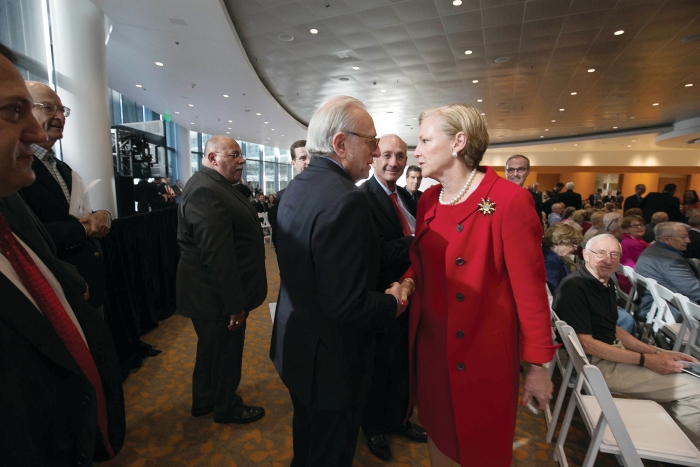 At DuPont’s annual meeting of shareholders in Wilmington, Del., today, Kullman, the firm’s chairwoman and chief executive officer, successfully headed off a bid from activist investor Nelson Peltz to install four of his choices for director on DuPont’s board.

Instead, DuPont’s complete slate of 12 directors was reelected. Peltz, who runs Trian Partners, a hedge fund that owns a 2.7% stake in DuPont, failed to win a single seat, including one for himself.

“The people at DuPont will ensure that our future will match the legacy of our exceptional history,” Kullman said to attendees following the vote.

Huddled with reporters in the back of the room after the vote was announced, Peltz attributed his defeat to DuPont’s superior messaging in advance of the meeting. “They did a better job with the press,” he said. Peltz accused DuPont of branding him a corporate raider who would burden the company with debt and cut R&D.

Kullman said DuPont spent $15 million on the effort to fend off Trian. Peltz spent about $6 million.

Since he amassed his stake in DuPont two years ago, Peltz has been vocal about what he sees as a number of management shortfalls at DuPont: Bulky overhead hampers DuPont with too many costs. The company has failed to increase earnings in recent years and often misses earnings estimates. And management has made missteps, such as its purchase of the food ingredient maker Danisco, which Peltz says have diluted earnings.

Outside commentators saw the fight as more than a mere showdown between a chemical company and a large, disgruntled shareholder. “The DuPont proxy vote is a part of a battle for the soul of corporate America,” wrote Bill George, a Harvard Business School professor and former Medtronic CEO, on his blog earlier this week.

George has been worried that activist investors gut R&D and promote short-term focus at companies. “If DuPont gets broken up and its central research labs shut down, it will mark the loss of a national treasure, just as it did the demise of Bell Labs,” he wrote.

Peltz also advocated breaking DuPont up further than Kullman’s planned spin-off of the Chemours performance chemical business. He proposed separating some of DuPont’s remaining chemical-oriented businesses, such as engineering polymers, from its agriculture and food-related businesses.

Peltz and Kullman both noted that DuPont has an unusual number of individual and retiree shareholders. Such small investors were a significant presence among the 400 people who attended the meeting on DuPont’s Chestnut Run campus. With most of the voting done beforehand, only about a dozen people actually cast their votes in person. The crowd erupted in applause when the results were announced.

Peltz wouldn’t say whether he will sell his stake now that he has been denied seats on DuPont’s board. He noted that Trian will file regulatory disclosures containing this information in six months.

Kullman, for her part, said she learned something from her experience. “We as a company don’t tell our story well enough,” she said.

Policy
Hats Off To Ellen Kullman
Business
DuPont Fends Off Activist Challenge
Business
DuPont Comes At Trian Swinging Once More
Share X
To send an e-mail to multiple recipients, separate e-mail addresses with a comma, semicolon, or both.
Title: DuPont Fends Off Activist Challenge
Author: Alexander H. Tullo
Chemical & Engineering News will not share your email address with any other person or company.