Materials: Colloidal nanospheres could lead to dye-free textiles of many hues 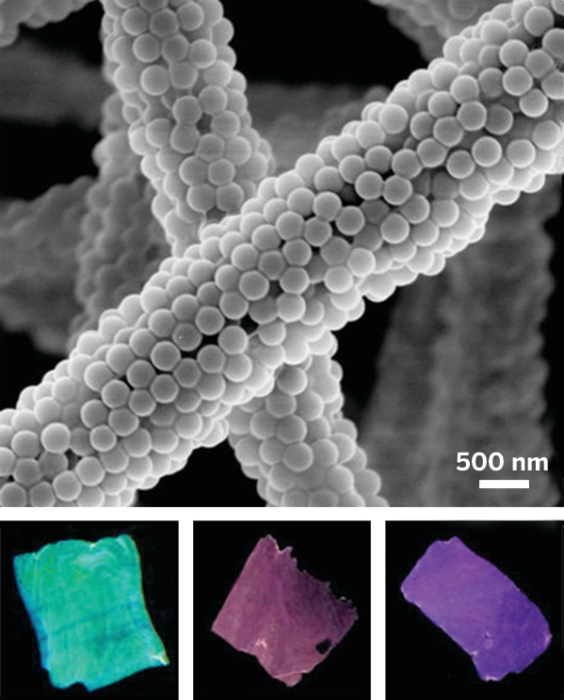 Dyeing textiles can be rough on the environment, producing pollution and using a lot of water and energy. Now researchers have shown they can make colored fibers by spinning them out of latex nanoparticles (ACS Appl. Mat. Interfaces 2015, DOI: 10.1021/acsami.5b03289). By controlling the size of the nanoparticles, the researchers can tune the colors of the fibers. If they can make their fibers strong enough for fabrics, a clothing manufacturer could one day use them to weave a coat of many colors without needing any dyes at all.

The new fibers make use of a phenomenon found in nature known as structural color; certain bird feathers or beetle shells, for instance, derive their color not from pigment but from how light interacts with the physical structure of the materials.

Ke-Qin Zhang, a polymer chemist and physicist at Soochow University, in China, wanted to apply this principle to synthetic fibers. “Basically, you can design the structure and obtain the different colors,” he says. Structural-colored fibers not only would avoid the environmental problems that come with dyes but also should not fade.

To build the fibers, Zhang and colleagues started by synthesizing batches of latex nanoparticles of uniform size out of poly(styrene-methyl methacrylate-acrylic acid). The team suspended each batch of nanospheres in a polyvinyl alcohol (PVA) solution creating a viscous fluid that they fed into a syringe. With electrospinning, which uses an electric voltage to draw fine threads of the fluid from the syringe onto a surface below, the researchers made mats of thin colloidal fibers, which they washed and dried. The unwashed mats were white, but the color was revealed when the washing step removed most of the PVA binder, leaving behind fibers of uniformly packed spheres.

The color of the fiber mats depended on the size of the spheres. Because the size of the particles is on the same scale as the wavelengths of visible light, the grid of packed spheres in each fiber forms a crystal that reflects a certain narrow range of wavelengths, thus creating a nearly pure color. Spheres 220 nm in diameter produced green fibers, 246-nm spheres made reddish fibers, and 280-nm spheres made fibers that were a purplish-red.

The colors weren’t perfectly pure, however, because of Mie scattering, a separate effect in which different wavelengths of light bounce off individual particles. To investigate the role of Mie scattering, the researchers packed nanospheres into glass capillary tubes used as molds. The spheres in the resulting fibers formed more orderly crystals than in the electrospun fibers, reducing the amount of Mie scattering and creating a purer color.

The biggest problem is that the fibers, only about 1.3 μm in diameter, don’t have enough mechanical strength to be made into textiles, Zhang says. His team is exploring ways to overcome that problem. One solution might be to make an ink from the colloidal spheres and print them onto the surface of more traditional fibers.

Shinya Yoshioka, a physicist at Osaka University, in Japan, who studies structural color in nature, finds the work intriguing. “If the fiber becomes strong enough to be woven, I think it is definitely useful,” he says.

Comments
Joe Atkinson (July 3, 2015 1:19 AM)
Great stuff! I hope you do a follow-up story in a year or so on progress in solving the mechanical strength problem of the fibers.
Reply »

Harvey Zeytuntsyan, J.D. (July 20, 2015 8:26 AM)
I can imagine some awesome athletic gear and engineered clothes in the future that could apply this technology! Great work and intriguing read.
Reply »