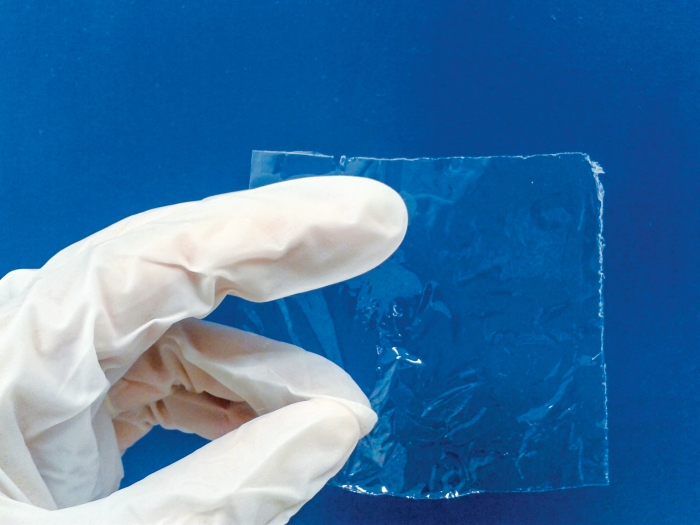 New materials containing ultraviolet-absorbing molecules found in algae and reef-fish mucus could serve as nontoxic, biocompatible sunscreens (ACS Appl. Mater. Interfaces 2015, DOI: 10.1021/acsami.5b04064). The photostable materials could be used in cosmetics or as UV-protective coatings for outdoor furniture or clothing, the researchers say.

Commercial sunscreens contain two types of compounds to block both longwave UV-A light that may cause cancer and shortwave UV-B light that causes sunburn. Some fish, algae, and cyanobacteria produce amino acids called mycosporines that absorb both UV-A and UV-B light. To develop more effective, biocompatible sunscreens, some manufacturers have added mycosporines to their formulations. But free mycosporine molecules can diffuse through a smear of sunscreen, making it difficult for the UV-blocking agents to stay where they are applied.

Susana C. M. Fernandes and Vincent Bulone, of the Royal Institute of Technology, in Sweden, and their colleagues thought they might solve this problem by attaching the mycosporine molecules to a polymer. First, they activated the carboxylic acid portion of each of three mycosporines using the coupling agent N-(3-dimethylaminopropyl)-N’-ethylcarbodiimide hydrochloride. Then the researchers attached each activated mycosporine to long chains of chitosan polymer. Chitosan is produced from chitin, a sugar polymer in crab, shrimp, and insect shells.

The new materials absorbed UV-A and UV-B light as effectively as the free mycosporines. The molar absorptivities of the three materials were 125 to 192% greater than that for ethylhexyl p-methoxycinnamate, a UV-B-absorbing ingredient in many current commercial sunscreens. Larger absorptivity values indicate greater UV protection, so these new materials could potentially be superior to current sunscreen ingredients, Bulone says.

The researchers then cast films from the new materials and found that the films were stable after exposure to 12 hours of UV light or temperatures of 80 °C. These properties may make the materials useful as UV-protective coatings for outdoor furniture or clothing, Bulone says.

Vijay Kumar Thakur of Washington State University, who was not involved with the work, says that because mycosporines are naturally occurring amino acids, they could be more biocompatible than current sunscreen ingredients. Indeed, Bulone and colleagues found that growing mouse fibroblasts on the films for three weeks resulted in little cell death. Thakur adds that chitosan has inherent antimicrobial properties, so he wonders if these new materials may be antimicrobial, as well.

In the U.S., regulators have been slow to approve sunscreen ingredients commonly used in other countries. But Bulone thinks commercializing these new materials could be relatively simple, since all the components—the mycosporines, chitosan, and the coupling reagent—are currently used in cosmetics, pharmaceuticals, or medical products.

Polymers
Celanese to sell stake in Polyplastics venture
Polymers
A new polymer keeps its strength with added degradability
Polymers
After purchase of Clariant business, PolyOne is now Avient
Share X
To send an e-mail to multiple recipients, separate e-mail addresses with a comma, semicolon, or both.
Title: Biocompatible Material Contains Sunscreen From The Sea
Author: Melissae Fellet
Chemical & Engineering News will not share your email address with any other person or company.

Comments
Valentina Dente (August 13, 2015 5:03 PM)
will these sunscreen also be longer in the time of action?
Reply »