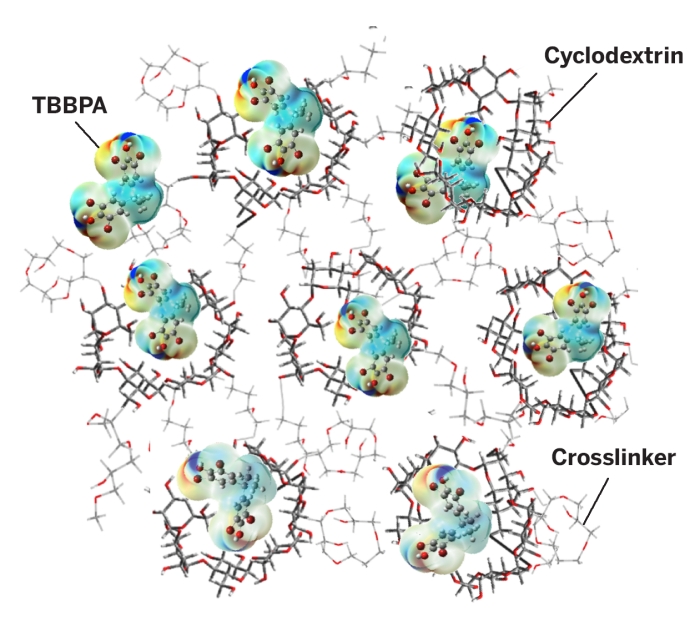 Credit: Xiyun Cai
Cyclodextrin rings (dark gray) cross-linked with epichlorohydrin (light gray) can adsorb micropollutants such as the flame retardant tetrabromobisphenol A (TBBPA) found in wastewater, trapping them for oxidation by potassium permanganate.

Pharmaceuticals and many compounds used in consumer products often slip through wastewater treatment plants at low concentrations—nanograms to micrograms per liter. Even tiny concentrations of compounds such as antibiotics or flame retardants in the environment can threaten the health of fish and other wildlife and, potentially, humans. Now, scientists have developed a way to catch these micropollutants before they escape the treatment plant: by trapping them in a cyclodextrin polymer and then degrading them with potassium permanganate (Environ. Sci. Technol. 2015, DOI: 10.1021/acs.est.5b01734).

Current methods to remove micropollutants include adsorption onto powdered activated carbon, which is then separated from the wastewater and burned. But the process can be costly because natural organic matter, which is abundant in wastewater, is also adsorbed onto the powder, meaning that a lot of activated carbon can be consumed in the treatment process. Another method, ozone treatment, breaks down the compounds through oxidation, but this can produce harmful by-products including formaldehyde.

To circumvent these pitfalls, Xiyun Cai of Dalian University of Technology, in China, and his colleagues designed a two-step method that targets micropollutants while limiting toxic by-products. In the first step, they used insoluble polymers made of cyclodextrins cross-linked with epichlorohydrin as adsorbents. Cyclodextrins, derived from starch, selectively trap small hydrophobic organic compounds. The doughnut-shaped cyclodextrins have a hydrophobic cavity that can encapsulate micropollutants while excluding the larger organic matter that can clog up activated carbon. In the second step, they applied KMnO4, an oxidant commonly used in wastewater treatment, to degrade the captured compounds into less harmful constituents such as carbon dioxide, water, and organic acids.

The researchers tested the approach on samples of distilled water or lake water containing the flame retardant tetrabromobisphenol A (TBBPA), a potential endocrine disruptor, or one of 13 different antibiotics, each at concentrations of 50 ng/L and 50 µg/L, representative of their range of concentrations in wastewater. After shaking the solutions for 10 hours with cyclodextrin polymer, they filtered out the cyclodextrin and analyzed the filtrate for remaining pollutants using high-performance liquid chromatography with tandem mass spectrometry. The researchers found that cyclodextrin adsorbed 94% of TBBPA and 12 to 79% of the antibiotics within four hours. They obtained similar results when they tested water containing calcium, magnesium, and dissolved organic matter at levels found in wastewater, indicating that these didn’t interfere with the adsorption.

Then the researchers incubated the pollutant-loaded cyclodextrin with KMnO4 at various concentrations, recovered the cyclodextrin, and extracted it with methanol before analysis with HPLC-MS/MS. Treatment with 100-μmol/L KMnO4 degraded more than 91% of the adsorbed pollutants within two hours.

Although the removal efficiency by cyclodextrin is low for certain compounds, Cai says it is comparable to that of other advanced treatment methods for micropollutants. What’s more, the cyclodextrin polymers are reusable, and they and KMnO4 are cheap. He says the combined method could target any organic micropollutant that can be degraded by KMnO4 oxidation, including many pesticides, pharmaceuticals, personal care products, and organic solvents.

Terrence J. Collins, director of the Institute for Green Science at Carnegie Mellon University, calls the work intriguing. He notes, however, that it is still at an early stage of development and must address technology, cost, and environmental health issues to reach real-world potential.

The researchers are now planning to pack the cyclodextrin polymers into column reactors to conduct pilot-scale tests of the technology, Cai says.