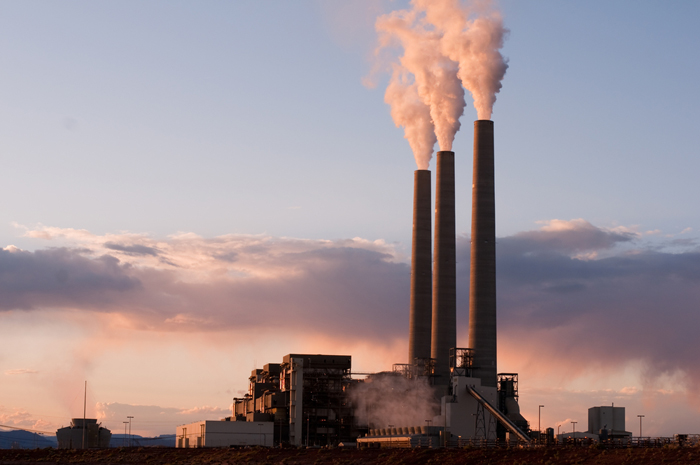 The carbon dioxide released by fossil-fuel power stations could be converted into methanol using small clusters of copper atoms.

With the help of the right catalyst, carbon dioxide emitted by fossil-fuel power stations could be used as a chemical feedstock, rather than contributing to greenhouse gas emissions. Researchers have now found that tiny clusters of copper atoms can generate methanol from CO2 at an unusually low pressure (J. Am. Chem. Soc. 2015, DOI: 10.1021/jacs.5b03668).

Copper is already used to catalyze industrial methanol production from syngas—a mixture of carbon monoxide, CO2, and hydrogen—at pressures of 10 to 100 atm and temperatures of a few hundred degrees C. But these conditions make the process energy-intensive and costly. “We wanted to use lower pressure to save energy,” says Larry A. Curtiss of Argonne National Laboratory.

The team peppered a thin film of alumina with Cu4+ clusters, and then monitored reactions over this catalyst in a gas stream containing 1% CO2, 3% H2, and 96% helium at an overall pressure of 1.25 atm. As they increased the temperature to 125 ºC, the H2 reduced the copper clusters to catalytically active Cu40. Methanol production peaked at 225 ºC, giving the highest reported activity for CO2 reduction to methanol at such a low CO2 partial pressure, a pressure around one-twentieth of that in work with previous catalysts.

Although promising, it remains to be seen whether this would be a chemically—or economically—viable way of utilizing CO2 waste from power plants. For now, Curtiss and his colleagues are looking for clusters that produce longer-chain hydrocarbons from CO2, potentially offering a renewable source of liquid fuels. Preliminary calculations suggest that a Cu20 cluster might be ideal, he says.

Comments
Enviro-Equipment, Inc. (July 14, 2015 3:42 PM)
Probably just another in a long line of technologies which, after being hyped up as the end-all and be-all of environmental protection, and of going nowhere.
Reply »

Auntie Markovnikov (July 15, 2015 7:07 AM)
The problem with CO2 conversion is thermodynamics, not kinetics. A cheap, abundant, readily available reducing agent is required for feasible CO2 conversion and one does not exist. For example, in the present case hydrogen is the reducing agent. Hydrogen must be manufactured, and is economically produced by steam reforming natural gas, which consumes fossil carbon and generates by-product CO2. Electrolysis and other routes are much more expensive sources of hydrogen. The net reactions are:

R French (July 15, 2015 7:47 PM)
Hydrogen can be made from renewable resources such as photovoltaics or wind and hydrolysis or biomass pyrolysis and reforming. Also biomass gasification followed by high-pressure synthesis can be used to produce renewable methanol or ethanol.
Reply »

Auntie Markovnikov (July 20, 2015 12:48 PM)
Hydrogen from those sources is much more expensive than nat gas steam reforming and are not presently economical.
Reply »

Stephen Jacobs (July 15, 2015 9:55 PM)
Ok, trying to figure out an industrial application: There are imaginable technologies that would produce enormous amounts of electricity at sites where neither local manufacturing nor a grid connection are convenient (I think in particular of variants of in-orbit capture of solar energy and radiative transmission to the surface...life is much simpler if the receiver is extremely isolated). Reducing power could be produced at such sites and exported (But the best way I can come up with quickly for exporting reducing power from blue ocean is as magnesium, which doesn't sound great)
Reply »

Krijn de Jong (July 17, 2015 11:00 AM)
The turn-over-frequencies (TOF = activity normalized to surface copper atoms) reported by the authors are two orders of magnitude lower than needed for a process with reasonable capital and operational costs. For the current methanol synthesis process the TOF values amount to about 0.04 1/s whereas in the current study a maximum value of 0.0004 1/s is reported.

Joao Guilherme Rocha Poco (September 30, 2015 10:18 AM)
Hydrogen has a cost as well as electricity. Some simple calculations on the energetic basis (thermodynamics) of this transformation shows that this will cost much more energy than one could imagine and does not operate as a perpetual motion style.
Unfortunately, unless it receives some input of external primary source of energy, for example, coming from the sun (solar) or the wind (eolic), the process of capturing CO2 from combustion and synthesis of fuels as could be induced in the article abstract tend to be not sustainable.
CCS (Carbon capture storage) or letting carbon where it is has a lower costs.
Reply »

Jerry Lobdill (January 31, 2016 6:46 PM)
The reaction of CO2 and H2 to produce CH3OH is an endothermic reaction. There is no way to obviate this fact. CH3OH can be oxidized (burnt) as an additive to gasoline...which produces CO2 again in an exothermic reaction. It seems to me that this process, while it produces usable energy, does it at a net energy cost. Why is this being considered? Isn’t this a net loser for combatting climate change?
Reply »

Jeff Casalina (March 5, 2016 11:49 AM)
If this can't be done with solar or some other form of sustainable energy, then they are wasting their time.
Reply »

Narendra Mohanty (March 27, 2016 11:49 PM)
Production of nascent, reactive hydrogen atoms needed for hydrogenation reactions. This works nicely for few reduction reactions in situ using Zn-Ni or Zn-Co (co)Catalysts. In order to overcome activation problem, CO is a better candidate.
Those working in this field are doing a great job for humanity, thus should be encouraged, and fully sopported/funded, I hope.
NM
Reply »

uncle pedinki (January 13, 2017 2:36 PM)
As we speak , microorganisms deep in Lake Kivu in the Central African Republic are busily converting carbon dioxide into methane - is that sustainable ?
If "mindless bugs" can do it , what, beyond our education and inhibitions , is stopping us , from "doing it " ?
Reply »