CORRECTION: This story was updated on Aug. 24, 2015, to correct the number of wells that used more than 1 million gallons of fracking fluid per well. 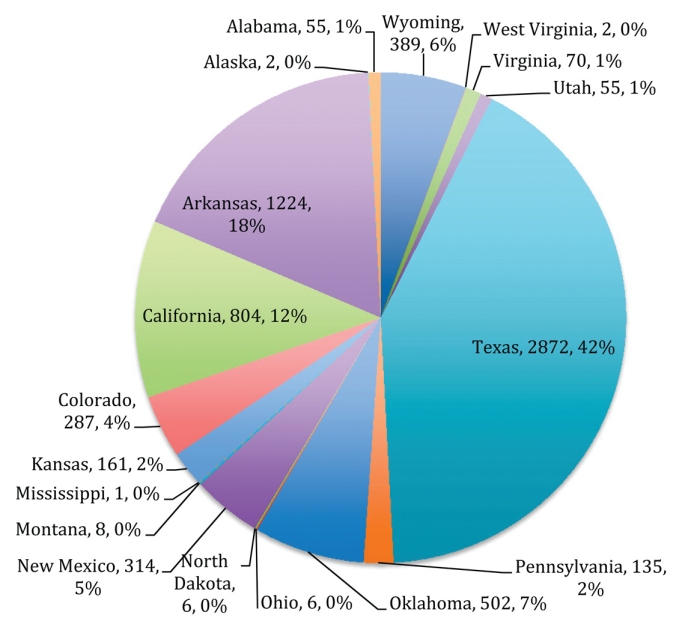 Fracking uses water, sand, and an often-proprietary blend of chemicals, which may include benzene, toluene, and other hydrocarbons. Oil and natural gas drilling companies force the mix underground under high pressure to fracture pockets of rock and release oil and gas trapped within, which they draw to the surface.

Shallow wells are cheaper and easier to operate, says Robert B. Jackson of Stanford University, who led the new study. “However, they pose a greater risk for groundwater contamination since they are close to drinking water aquifers.” These groundwater sources can rest from hundreds to thousands of feet below the surface, and natural geologic cracks or faults and past drilling activities can provide a pathway between shallow fracking sites and an aquifer, allowing fracking chemicals, oil, and methane to reach drinking water supplies. Currently, groundwater in Wyoming and California is being investigated for possible fracking-related contamination.

Jackson and colleagues sought to better understand how widespread the risks of fracking-related groundwater contamination might be. So they analyzed the best and only data on fracking wells drilled, from a mostly voluntary well-drilling reporting system known as FracFocus. Between 2010 and 2013, nearly 7,000, or 16%, of the 44,000 hydraulic-fractured oil and gas wells that companies reported drilling were less than a mile deep, according to the team’s analysis. At least 2,600 wells were fracked at 3,000 feet deep or less, and some as shallow as 100 feet. The median depth for all fracturing wells was around 8,200 feet.

In addition, when fracking at least 2,000 of these wells less than a mile deep, drillers used large amounts of water and chemicals, more than 1 million gal per well, to initially fracture rocks and free oil and gas reserves. This subset of wells presents even higher risks of groundwater contamination, the team reports. Arkansas, for example, had more than 300 wells fracked shallower than 3,000 feet, using an average of 5 million gal of water and chemicals per well.

FracFocus relied on voluntary reporting during the study period, and Jackson estimates that the actual number of wells drilled was at least twice the reported number. Reporting requirements have become more stringent since late 2013, however, says an official with FracFocus.

Because they are cheaper to drill, shallow wells are likely to become more common, Jackson notes. But because the output in fracked wells drops by about 80% within the first two years of production, tens of thousands of fracked wells would have to be drilled each year to maintain current output, he says.

Several countries, including Germany, the U.K., and Canada require, or are considering, regulation of shallow-well fracking to guard against groundwater contamination. In the U.S., only Texas and Colorado have any policy or technical requirements for such wells so far, according to the report.

Both Jackson and Mike Nickolaus, an analyst with the Groundwater Protection Council, an organization of state water regulators, found the number of shallow wells surprisingly high. But, “depth is not the only issue,” Nickolaus notes. The margins between well and aquifer and the makeup of rock, the site-specific geology, and fracking pressure are also important. He adds that several states are considering measures that would mandate site-specific studies before drilling begins as well as groundwater monitoring before and after fracking near drinking water sources.

Pollution
Mercury makes it deep into marine trenches
Sustainability
US Senate passes sustainable chemistry legislation
Environment
P2 and ADM pair up for renewable products
Share X
To send an e-mail to multiple recipients, separate e-mail addresses with a comma, semicolon, or both.
Title: Shallow Fracking Wells May Threaten Aquifers
Author: Jeff Johnson
Chemical & Engineering News will not share your email address with any other person or company.

Charles L. Foxx (August 13, 2015 1:10 AM)
The only certain way to define the extent of this problem is to perform the ground water monitoring before and after fracking near drinking water sources. Everything else is simply conjecture and speculation. I remember hearing of water wells being contaminated with hydrocarbons long before fracking came on the scene. Shallow fracking wells will not necessarily become more common just because they are cheaper to construct and operate. The primary requirement is that the oil and gas reside at shallow depths. If the shallow oil and gas reservoirs are attractive from a production cost standpoint, it would appear that they would be depleted sooner than the deeper reservoirs and their numbers would dwindle rather than increase. But once again this is conjecture and speculation. What is needed is comparable before and after data.
Reply »