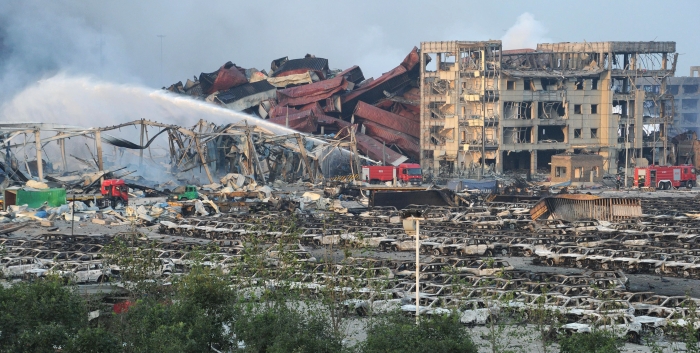 Two massive blasts at a hazardous chemical storage warehouse in Tianjin’s harbor killed at least 50 people and injured hundreds of others on Aug. 12. Victims were primarily firefighters and employees of cargo handling firms operating in the Chinese harbor.

Beijing Daily Group, a media group based in Beijing, reported that the first explosion had a force equivalent to 3 tons of TNT. The second blast, far larger, represented the equivalent of 21 tons of TNT. Chinese state media reported that windows were shattered on buildings miles away from the accident. Chinese TV news showed images of huge plumes of flames shooting into the sky.

The accident occurred in Binhai New Area at the company Ruihai Logistics, a freight handler that according to state media reports is authorized to manage dangerous goods. Authorities took in several of the company’s employees for questioning. The firm’s website became inaccessible after the blasts.

With a population of 15 million people, Tianjin is one of four cities directly managed by China’s national government. In a statement, Tianjin’s government said China’s President Xi Jinping had taken control of the situation. Xi issued several directives, notably ordering that the fire be rapidly put down and that those responsible be severely punished.

In an account on the Chinese website Weibo, Tianjin’s fire department said it deployed 143 engines and 1,000 firefighters to control the fire, but that it didn’t know the nature of the chemicals involved in the disaster. According to Chinese media, several firefighters died and others are unaccounted for.

Tianjin is home to some of China’s top universities, including Nankai University and Tianjin University (TJU). Jay Siegel, dean of the School of Pharmaceutical Science & Technology at TJU, tells C&EN that students and staff at his school are safe because the school is in the center of Tianjin, more than 40 miles away from the port.

Binhai is, however, located about 8 miles from the Tianjin Economic-Technological Development Area, home to numerous pharmaceutical and chemical companies. Among international firms with operations in the area, according to TEDA, are Dow Chemical, Eastman Chemical, Cabot Corp., AkzoNobel, and GlaxoSmithKline.

Vanessa Craigie, communications manager for Cabot, says the company’s plant is in an industrial park 20 km from the chemical warehouse and was not impacted by the explosion. “To our knowledge, none of our employees or their families were affected by the explosion,” she tells C&EN. “We are continuing to check in on each employee individually to confirm.”

Comments
Peter Finamore (August 21, 2015 3:53 PM)
Do we know what chemicals were responsible for blasts? --- Looks to have the character of another NH4NO3 incident.
Reply »