Modern Circuits From An Ultrathin Material

SURFACE DOPANT
[+]Enlarge
Credit: Nano Lett.
A fluorinated organic compound known as F4-TCNQ acts as a dopant at the surface of a thin film of tungsten diselenide, enabling the “2D” film to conduct positive charge. 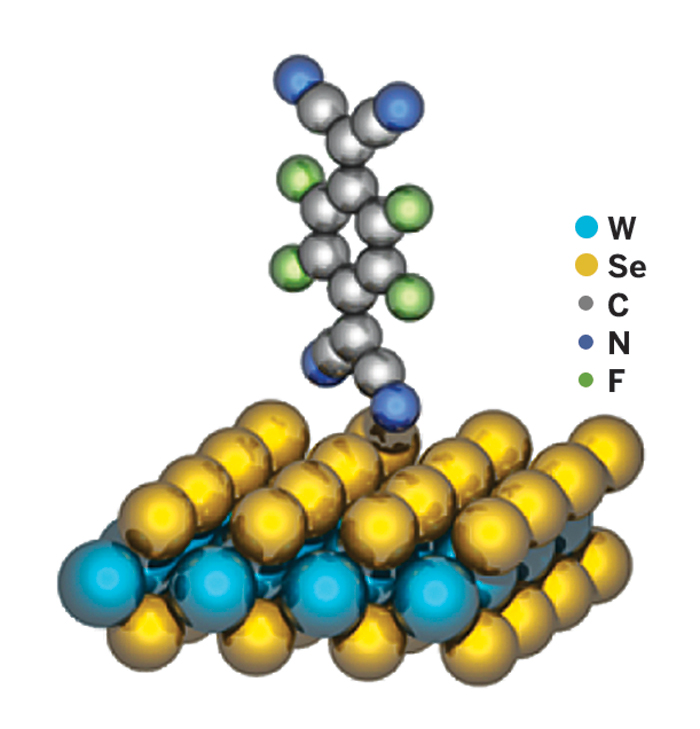 Credit: Nano Lett.
A fluorinated organic compound known as F4-TCNQ acts as a dopant at the surface of a thin film of tungsten diselenide, enabling the “2D” film to conduct positive charge.

Tomás Palacios, an electrical engineer at MIT, wants to make it possible to put electronics everywhere—to wrap buildings and highways with sheets of weather sensors, energy harvesters, environmental monitors, speakers, and other devices. Flexible circuits for these kinds of “ubiquitous” electronics don’t need to achieve the high performance of the rigid silicon chips used in computing, says Palacios. They just need to be durable, thin, flexible, and operate at low power.

To this end, he and his team have made simple but state-of-the-art integrated circuits from ultrathin films—often called “2D”—of tungsten diselenide that are stable and relatively compact (Nano Lett. 2015, DOI: 10.1021/acs.nanolett.5b00668).

To get good performance and low power consumption from an electronic material, you have to be able to use it to make two kinds of transistors, those that conduct negative charges and those that conduct positive charges. Transistors are the electrical on/off switches at the heart of circuits. Complementary metal oxide semiconductor, or CMOS, technology combines both types of transistors in a single circuit. This enables engineers to pack a lot of computing punch in a small area and save power. To realize the world of ubiquitous electronics will require CMOS circuits made from novel 2D materials like tungsten diselenide.

The key to building silicon CMOS circuits is a process called doping. Engineers replace atoms of pure silicon with foreign atoms to make the material better at conducting charge. But 2D materials are too thin for traditional doping. Another approach is to adsorb dopants at the material surface. But these dopants disperse over time.

In the new study, Palacios figured out how to hold dopants at the surface to make stable transistors. Tungsten diselenide alone conducts electrons well enough to act as a negative-type transistor material. But positive transistors require doping. So the MIT group started with a known fluorinated organic dopant known as F4-TCNQ, and mixed it with a Plexiglas-like polymer. They spun this dopant-coating mixture onto the surface of a tungsten diselenide flake, holding the dopant in place. Finally, they used traditional semiconductor manufacturing to finish the transistors and connect them to make a basic CMOS circuit element called an inverter. The inverter’s voltage gain was 35, meaning it was able to amplify an incoming signal by 35 times.

This performance is decent and the power consumption is low, says Fengnian Xia, an electrical engineer at Yale University who’s also working on 2D electronic materials. “The next step should be to make a more complex circuit so that they can demonstrate its speed,” he says. It’s notable that the entire circuit was made on one flake of tungsten diselenide, Xia says. Other attempts to make CMOS circuits from 2D materials have required wiring up flakes of different materials, which isn’t practical.

A single-flake circuit is an important first step but it’s still a long way from practical applications, notes Palacios. To get the flakes needed for his experiments, Palacios’ team used Scotch tape to peel off sheets of tungsten diselenide a few atoms thick—just as researchers did in the early days of graphene. As with graphene, chemists will have to figure out how to grow large, pure sheets of the material, probably by chemical vapor deposition. With this demonstration, says Palacios, there’s now a clear reason to work on that problem.