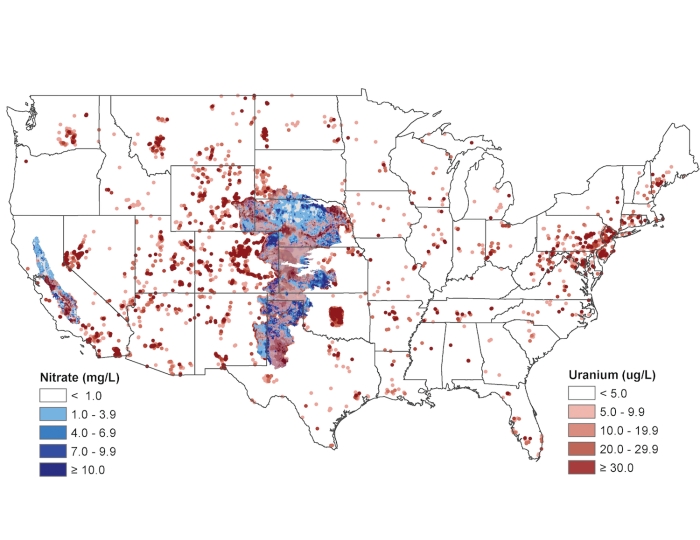 Uranium contaminates aquifers in many parts of the world, posing a threat to drinking water sources for millions of people in nearby communities. Found naturally in rocks including granites and shales, uranium can dissolve when exposed to oxygen or other oxidants in groundwater. Now researchers show that nitrate, an oxidant that commonly invades groundwater through fertilizer use, may promote uranium release in two major U.S. aquifers (Environ. Sci. Technol. Lett. 2015, DOI: 10.1021/acs.estlett.5b00174).

Several years ago, Karrie A. Weber of the University of Nebraska, Lincoln, heard reports that some rural Nebraskans had to find drinking water alternatives when their wells showed uranium contamination. Uranium can cause kidney damage and increase risk for cancer, so the Environmental Protection Agency sets limits on its levels in drinking water. Weber and her colleagues study how nitrate mobilizes uranium in groundwater, a phenomenon that had been observed at sites contaminated with nuclear waste and in the lab. She thought nitrate was probably influencing these natural systems, too. “The question became, how widespread was this?” Weber says.

To answer it, she and graduate student Jason Nolan examined existing geochemical data on two major U.S. aquifers used for drinking water and irrigation: the High Plains aquifer, which underlies eight western states including Nebraska, and California’s Central Valley aquifer. Using a range of sources, including the U.S. Geological Survey’s National Water Information System, they assembled a database of water quality information from more than 270,000 groundwater samples collected from nearly 62,000 locations in the aquifers. Because data on uranium are scarcer than those on nitrate, the scientists interpolated the available uranium data to fill in the gaps.

Analyzing the database, the team found that uranium concentrations exceeded the EPA’s maximum level of 30 μg/L in 10% of the wells they considered, and nitrate exceeded EPA’s maximum of 10 mg/L in 21% of the wells. Some 2 million people live within a kilometer of groundwater exceeding the uranium limit.

Moreover, uranium and nitrate concentrations were strongly correlated in large regions within the two aquifers. This includes 17,500 km2 of the High Plains aquifer, underlying parts of North Texas and Nebraska, and about 1,600 km2 of the Central Valley aquifer, in the San Joaquin and Tulare Basins. In these regions, mean concentrations of uranium and nitrate both exceeded EPA’s maximum contamination levels.

They also found that the two chemicals were strongly correlated in shallow wells less than 30.5 m deep. Compared with deep wells, shallow wells are more than eight times more likely to exceed the EPA maximum for both nitrate and uranium, probably because they are more susceptible to nitrate infiltration from runoff, Weber says.

The study suggests that nitrate influences uranium solubility in these aquifers, says Michael J. Wilkins, a geomicrobiologist at Ohio State University. Because of uranium’s potential health risks, he says, “these results are yet another reason why it’s important to limit nitrate runoff into water bodies.”

Weber next plans to examine what conditions—whether chemical, physical, or microbial—promote uranium oxidation in groundwater. When uranium contamination does occur, she says, it’s often cheaper to drill another well than to treat drinking water. But for situations where that is not an option, she is also researching how groundwater could be managed to promote microbes that reduce both uranium and nitrate, producing insoluble uranium compounds and nitrogen gas.

Pollution
Measuring microplastics in seafood
Water
Jessica Ray
Sustainability
Kevin Barnett
Share X
To send an e-mail to multiple recipients, separate e-mail addresses with a comma, semicolon, or both.
Title: Nitrate Pollution May Trigger Uranium Release Into Groundwater
Author: Deirdre Lockwood
Chemical & Engineering News will not share your email address with any other person or company.