PBS Docudrama Brings Discovery Of The Chemical Elements To Life

Three-hour series, “The Mystery of Matter,” tells the tales of seven scientists with dramatic reenactments 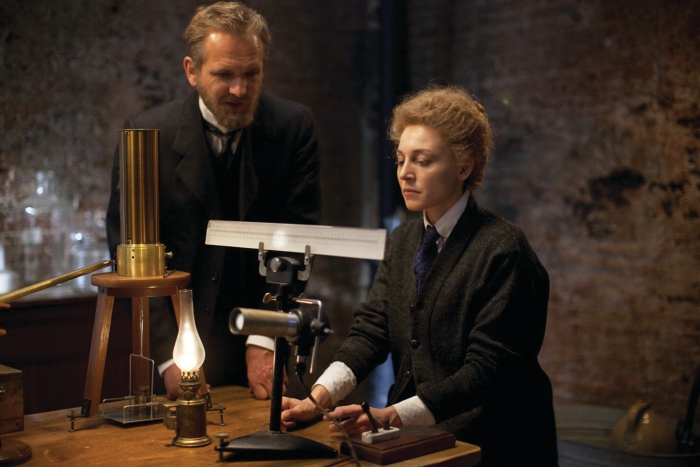 In the world of science television, chemistry rarely gets a starring role. But for more than a decade, filmmaker Stephen Lyons has been working to bring the stories of chemistry’s pioneers and their groundbreaking discoveries to life on the small screen. On Aug. 19, many PBS stations across the country will air the culmination of that effort, “The Mystery of Matter: Search for the Elements.”

The three-hour broadcast uses dramatic reenactments, expert interviews, animation, and narration to tell the story of seven scientists and their work. The series begins with Joseph Priestley, Antoine Lavoisier, and the discovery of oxygen. Chemistry giants Humphry Davy, Dmitri Mendeleev, Marie Curie, and Harry Moseley each get their own tale. And the show finishes with Glenn Seaborg’s groundbreaking research on transuranic elements.

“It’s the story of how the elements came about through the contributions of these seven different people,” Lyons tells C&EN. “Obviously, we’ve glossed over quite a bit and not mentioned lots and lots of people, but we decided that it would make a more interesting series if we focused on a few individuals because it gave each of them time to emerge as a full-blown character.”

Lyons is no stranger to making movies about chemists. His 2007 NOVA documentary, “Forgotten Genius,” about chemist Percy Julian won the American Association for the Advancement of Science’s Science Journalism Award and the National Association of Science Writers’ Science in Society Award.

As project director, writer, producer, and codirector on “The Mystery of Matter,” Lyons had to delve into the details of these scientists’ lives, using their writings to construct scripts and researching what their laboratories and equipment looked like to build sets and replicas. For example, he commissioned specialty scientific equipment maker Jim Morris, from Antiques of Science & Technology, to re-create the long X-ray tube Moseley used to establish the atomic number’s importance in the periodic table.

Writing a compelling script that showed the characters’ lives in the lab proved tough, says “The Mystery of Matter” codirector Muffie Meyer. “Film for television has to be informative and entertaining,” she explains. “Finding experiments these scientists did that are visually understandable to an audience and, for lack of a better word, ‘sexy’ enough to be entertaining was challenging. It’s really hard when you get to Seaborg, where everything happens inside a cyclotron.”

Emmy Award-winning actor Michael Emerson, who appeared in the television series “Lost,” hosts “The Mystery of Matter.” Lyons had originally hoped to have a chemist host the series (C&EN, March 12, 2012, page 80). But he ultimately decided on an actor to draw in viewers who might not be primed to watch a chemistry program and to film the host’s scenes—many of which involve chemistry demonstrations—quickly and efficiently.

“The Mystery of Matter” premiered last year on Oregon Public Broadcasting, airing in one-hour segments over the course of three weeks. Although ratings were low for the first week, Lyons says positive buzz drew more viewers for the second and third weeks. The show was one of the station’s highest-rated programs for the 10 PM time slot in 2014.

When production on the show wrapped, Lyons and his colleagues realized they had accumulated an incredible resource—hours of footage, more than 100 animations, a multitude of interviews and photographs—much of which didn’t make it into the three-hour series. “Rather than let it sit on our shelf where no one can see it, we decided to take the material and create an educational resource,” Lyons says.

Through grants from several foundations, they’ve created a series of short videos for chemistry teachers to use. Some will be available on pbs.org/mysteryofmatter, and others will go up on a stand-alone website later this year. “In a way, the television series is just the beginning of the life of the project,” Lyons says. “I’m hoping that teachers will continue to use this material forever.”

Lyons also says there may be more episodes in store for “The Mystery of Matter.” “All we’ve really revealed in this series is how the elements were discovered,” he notes. “We recognize there’s a whole lot more to the mystery of matter than the question ‘What are the elements?’ There’s still the question of how do these elements combine with each other to form all the things we see around us. That’s another good story that maybe we’ll get to tell someday.”

Science Communication
Book covers and Disney characters—there’s a periodic table for everything
Science Communication
Parodies and party beverages, all in support of science
Science Communication
Infografias Periodicas: Principales noticias de 2019
Share X
To send an e-mail to multiple recipients, separate e-mail addresses with a comma, semicolon, or both.
Title: PBS Docudrama Brings Discovery Of The Chemical Elements To Life
Author: Bethany Halford
Chemical & Engineering News will not share your email address with any other person or company.

Comments
Kerry McNamara (August 8, 2015 2:15 PM)
Thank you for this! I will recommend this to my upcoming Introductory Chemistry students.
Reply »

Ted Hoffman (August 12, 2015 5:52 PM)
The obvious choice for host of this program was Roald Hoffmann. Did he turn the producers down?
Reply »

Bethany Halford (August 17, 2015 2:46 PM)
Although Moseley's first name was Henry, he was known as Harry. Watch The Mystery of Matter to learn more about him.
Reply »

Norman Oppenheimer (August 19, 2015 12:03 AM)
This show sound fantastic! Two people who would make for interesting television would be the German author Goethe and the Russian composer Borodin. In addition to his writings Goethe made major contributions to mineralogy, understanding the properties of light and was a major player in both artistic and scientific circles. Borodin is known for his music but was among the leading organic chemists of the 19th Century (and illustrated how the West marginalized Russian science). By revealing this little known aspect of the lives of these two well-known artists a show can demonstrate to the general population how arts and science can interact.
Reply »