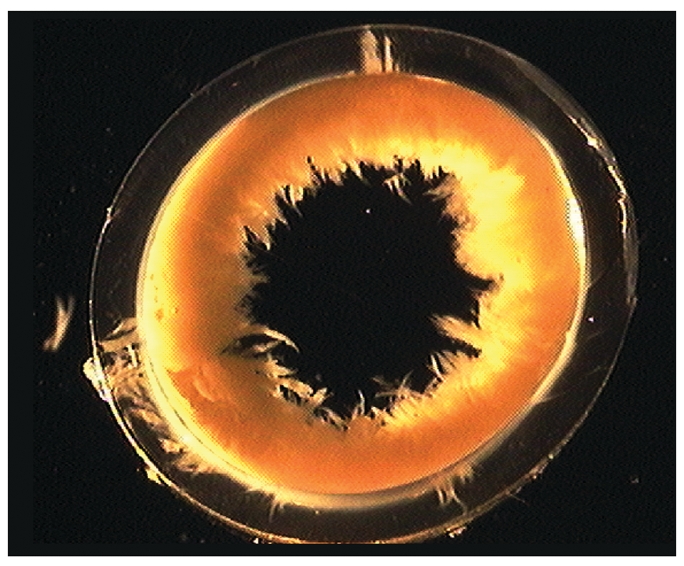 The “brain-eating amoeba” Naegleria fowleri has grabbed headlines from New Orleans to Karachi, as its victims contract the rare but deadly pathogen after getting water up their noses. Increasingly, experts have traced the source of infection to drinking water pipes, where chlorine disinfection ought to be killing the amoeba. But a new study proves for the first time that biofilms coating drinking water pipes help N. fowleri evade death by chlorine (Environ. Sci. Technol. 2015, DOI:10.1021/acs.est.5b02947).

N. fowleri is a free-living single-celled organism that grazes on bacteria in lakes, rivers, and soil. People can drink water containing the amoeba and not get sick because the digestive system will kill the pathogen. But if a person inhales water, N. fowleri can penetrate nasal mucus and work its way to the brain where the body’s immune response sets off brain swelling, triggering primary amoebic meningoencephalitis (PAM). The disease is rare but kills more than 97% of infected people.

“Most cases of PAM arise from freshwater sources such as lakes, but an increasing number are linked to drinking water systems,” says study coauthor Geoffrey J. Puzon, a microbiologist at Australia’s Commonwealth Scientific & Industrial Research Organisation. In pure water cleared of other microorganisms, the infective form of N. fowleri dies after a 5-minute exposure to a chlorine concentration of 0.5 mg/L, roughly the recommended level for water systems.

But water networks aren’t so clean. Some microbes naturally inhabit the systems, forming a slippery biofilm of cells and organic matter on pipe walls. Other researchers have shown that water in such systems requires longer disinfection times and higher concentrations of disinfectant to kill common pathogens because the biofilm absorbs free chlorine, reducing its concentration in the water. “So we wondered if pipe biofilms could be protecting N. fowleri from disinfectants,” Puzon says.

“In the real world, biofilms get mobilized and sloughed off pipes, so we wanted to see what happens in that situation,” he says. He and his team sampled a biofilm containing naturally occurring N. fowleri from a drinking water pipe, suspended it in tap water, and subjected the mixture to increasing levels of chlorine. At the same 0.5 mg/L that kills the amoeba in 5 minutes without other microorganisms present, N. fowleri mixed with biofilm survived for 24 hours.

Next, the scientists wanted to test how an intact biofilm compares to free-floating biofilm as a haven for N. fowleri. The researchers gathered field samples from water networks by allowing natural biofilm to accumulate on glass rings placed inside water pipes, which the researchers then brought back to the lab. The film on the rings contained naturally occurring N. fowleri, which the researchers challenged with increasing amounts of chlorine. The amoeba survived for three hours in a chlorine dose of 20 mg/L, up to 40 times the WHO’s recommended concentration for drinking water systems. “This suggests that the biofilm on the pipe wall physically prevents the penetration of chlorine,” Puzon says.

“This study provides numbers that water utilities can use to protect public health,” says Joseph O. Falkinham, a microbiologist at Virginia Tech who was not part of the study. After Louisiana officials found N. fowleri this year in one of the state’s drinking water networks, they flushed the affected pipes with an elevated chlorine concentration of 1 mg/L for 60 days to kill off the amoeba, a response supported by Puzon and his recent findings.

But Daniel B. Oerther, an environmental engineer at Missouri University of Science & Technology, cautions against the regular use of elevated chlorine in water systems without a closer evaluation. This treatment may lower the small but terrifying chance of an amoebic infection, but when chlorine reacts with organic matter such as that found in biofilms, it can form carcinogens, which may represent a larger public health risk overall.

Environment
Legionnaires’ outbreaks in Flint linked to city’s water problems
Water
Legionnaires’ outbreaks in Flint linked to corrosive tap water
Water
How Lead Ended Up In Flint’s Tap Water
Share X
To send an e-mail to multiple recipients, separate e-mail addresses with a comma, semicolon, or both.
Title: “Brain-Eating Amoeba” Scoffs At Chlorine In Water Pipes
Author: Janet Pelley
Chemical & Engineering News will not share your email address with any other person or company.

Joseph Cotruvo (September 9, 2015 2:10 PM)
There is nothing new about microorganisms colonizing biofilms where they are protected from chlorine. The idea is to kill or filter out the microorganisms before they enter the pipe so they will not colonize the distribution system. Of course, biofilms collect in pipes and microorganisms can colonize the biofilm where they will be protected from the disinfectant, whatever it is. Legionella organisms are much more environmentally prevalent than naeglaria and colonization is a greater problem, and it is likely that at least thousands of water distribution related cases and hundreds of deaths are caused annually from inhalation of aerosols such as during showering.
Reply »