CORRECTION: This story was updated on Oct. 15, 2015, to correct the name of University of Plymouth geochemistry professor Steven Rowland.

A mysterious substance that coated and killed hundreds of birds in the San Francisco Bay appears to be a polymerized oil, derived from plant—as opposed to petroleum—sources. 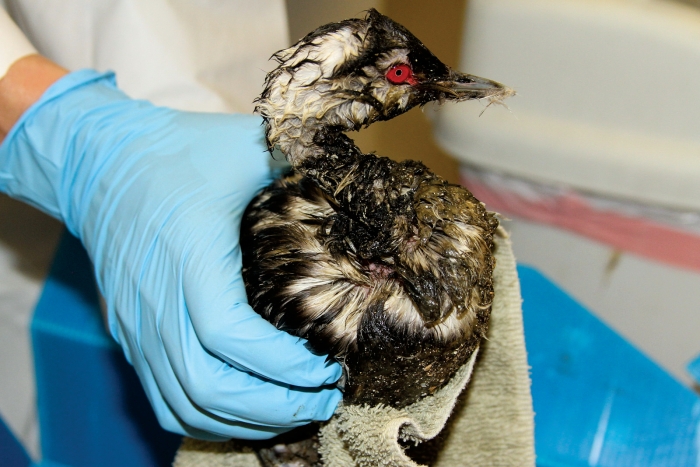 Credit: International Bird Rescue
A bird has its feathers cleaned after a mysterious sticky substance contaminated the San Francisco Bay in January.

The contamination release, which was apparently a onetime event, made headlines in California when 170 birds were found dead and 323 coated live birds washed up on shore in January. The substance, which had a rubber-cement-like consistency, hardened on feathers like varnish, completely incapacitating the birds.

The organization International Bird Rescue (IBR) was unable to clean the birds with traditional soapy water used in oil spills. IBR found that the substance could be removed painstakingly with successive treatments of a baking soda paste, followed by a vinegar rinse, and then a soapy water wash.

Labs from all over the world, including those from the U.S. Environmental Protection Agency, the National Oceanic Atmospheric Administration, Chevron, and the California Animal Health and Food Safety Laboratory, joined the effort to identify the goo.

Scientists quickly eliminated a petroleum source for the goo based on the lack of polyaromatic hydrocarbon signatures in gas chromatography-mass spectrometry scans. But they did find signals for chlorophyll, suggesting a plant-based source.

But even with the suites of analytical techniques, including infrared spectroscopy, mass spectrometry, and high-performance liquid chromatography, the labs still could only identify segments of the polymer. Scientists were stumped, says Daniel Orr, a chemist with the California Department of Fish and Wildlife (CDFW).

They have now identified methyl esters of long-chain fatty acids found in vegetable oils and polymeric esters in the sticky substance. But tracing the pieces back to the original polymer has proved impossible.

Physical and chemical hurdles hindered the identification. The material was deeply encrusted in the feathers of birds, and each sample from every bird was different due to a range of other contaminants from the animals themselves and the ocean.

“We were never able to get a good source sample,” Orr says. “The chemistry is very hard when you have so many possibilities.”

Steven Rowland, an organic geochemistry professor at the University of Plymouth, in England, was one of the first scientists to offer assistance. His group had recently successfully identified polyisobutene as the culprit in a massive spill off the coast of the U.K. in 2013. Thousands of birds were killed during that disaster.

Polyisobutene’s physical characteristics share many similarities to the California contaminant—sticky, gummy, gluey—led many scientists to suspect it was the culprit.

But Rowland’s lab compared their infrared spectra with those of the California samples, and was able to rule out polyisobutene. Rowland didn’t stop there: He compared spectra from the California samples to those from a library of ocean contaminants that he’s amassed over the years. None were a match. “We still could not identify it conclusively,” Rowland says. “It’s annoying.”

The exact source of the contamination remains unknown, and may never be known, given the great number of possible accidental or deliberate release sources, Orr says. For example, the Bay area is home to many food plants that processes large amounts of vegetable oil. Also biodiesel processors, which work with the plant-based oils, have proliferated in the area.

The CA agencies are still actively looking for a culprit. People with information on the incident, they say, should contact the organization Californians Turn in Poachers or Polluters (CalTIP) at 1-888-334-2258 or download the free CalTIP smartphone App. All reports are confidential.