The Search For Cyanoform Is Over

Organic Chemistry: After a century of trying, chemists isolate one of the strongest carbon-based acids known to exist 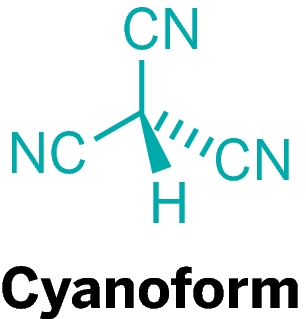 Cyanoform, HC(CN)3, also known as tricyanomethane, is sometimes listed in organic chemistry textbooks as one of the strongest carbon-based acids known. But after more than a century of chemists trying to make the compound, questions have remained as to whether they truly have. The best researchers have been able to do before now is get a fleeting glimpse of cyanoform by microwave spectroscopy in the gas phase at very low pressure.

Researchers in Germany report they have finally figured out the essential experimental conditions necessary to isolate and characterize the celebrated compound and confirm its existence (Angew. Chem. Int. Ed. 2015, DOI: 10.1002/anie.201506753).

Cyanoform’s noteworthy chemistry stems from the electron-withdrawing nature of its cyano groups, which creates a very weak link between the central carbon atom and the molecule’s hydrogen atom. The molecule readily gives up its hydrogen, making it a strong acid (pK2 of -5.1 in water).

Chemists had assumed cyanoform would be stable at room temperature in water, but the compound has been devilish to isolate. Among the attempts to make cyanoform, chemists have tried using sulfuric acid to protonate salts of tricyanomethanide, (NC)3C-. Cyanoform is so acidic, however, that in the presence of water the isolated solid is a hydrate, [H3O]+[C(CN)3]-.

Theresa Soltner, Jonas Häusler, and Andreas J. Kornath of Ludwig Maximilian University of Munich instead used anhydrous hydrogen fluoride as a reactant and solvent with calcium tricyanomethanide at low temperature. The team found that cyanoform can be isolated as a crystalline solid, but it’s only stable below -40 °C and is moisture sensitive. The researchers studied the molecule using infrared, Raman, and nuclear magnetic resonance spectroscopy, showing that it exists as tetrahedral HC(CN)3, rather than the possible dicyanoketenimine tautomer, (CN)2C=C=NH.

“Isolating cyanoform is a major step forward,” says Jason A. C. Clyburne of St. Mary’s University, in Halifax, Nova Scotia. “This work should spark renewed interest in fundamental main-group and organic chemistry in alternative reaction media, such as anhydrous HF.”

Last year, Clyburne’s group showed that cyanide ion can trap CO2 to form cyanoformate, another elusive molecule that is thought to be an intermediate in the biosynthesis of ethylene, a plant hormone that promotes fruit ripening. Along with reports on the occurrence of cyanide species in interstellar space, “cyanide chemistry appears to be having a small renaissance,” Clyburne says.

Inorganic Chemistry
Silicon-carbonyl complex is stable at room temperature
Synthesis
Elusive Criegee reaction intermediate captured
Chemical Bonding
Six bonds to carbon: Confirmed
Share X
To send an e-mail to multiple recipients, separate e-mail addresses with a comma, semicolon, or both.
Title: The Search For Cyanoform Is Over
Author: Stephen K. Ritter
Chemical & Engineering News will not share your email address with any other person or company.