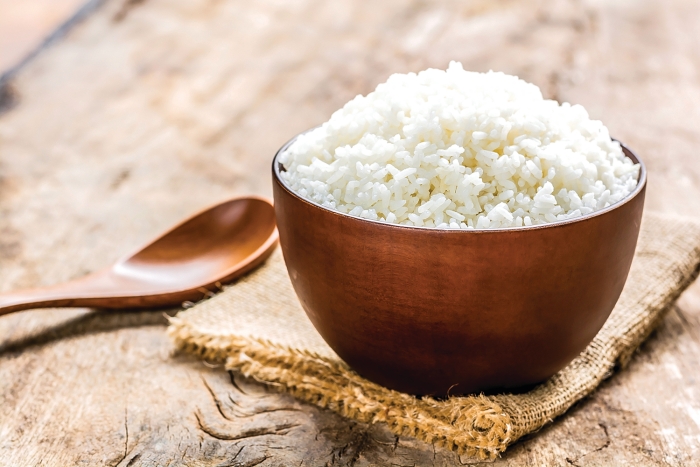 Credit: Shutterstock
In June, the European Union adopted limits on arsenic in rice.

Given these regulations, rice producers would benefit from screening their rice for inorganic arsenic before bringing it to market. But in Southeast Asia, the world’s top rice-exporting region, and other rice-producing areas in the developing world, this isn’t easy. The gold standard of analysis is high-performance liquid chromatography with inductively coupled plasma mass spectrometry (HPLC-ICP-MS), which requires a lab with expensive instrumentation, expert operators, and reliable power.

Jörg Feldmann of the University of Aberdeen and his colleagues wanted to find a simple device that would give rice producers a direct answer. So they adapted a commercial field kit called the Arsenator, which is designed to measure inorganic arsenic in drinking water by converting these species into arsine gas and reacting it with mercuric bromide, a color-changing reaction known as the Gutzeit reaction. 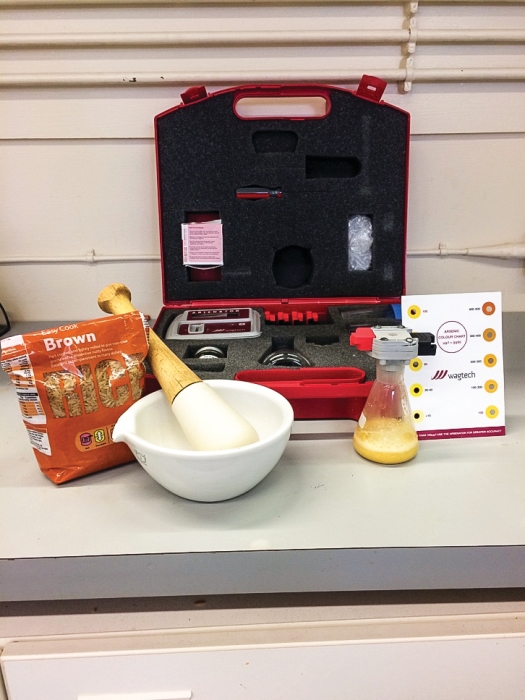 To adapt the kit for rice, the team needed to find a way to get the arsenic from the rice into solution in a reliable way. Then they could use the Arsenator kit to produce and quantify arsine gas and determine the levels in the rice.

Their method takes about an hour, and involves four steps. First, the researchers boil a 5-g sample of ground rice in nitric acid for about 30 minutes to extract inorganic arsenic in the form of arsenic acid. Once the solution cools, they transfer it to a flask, after which they can use the Arsenator kit: They add packets of sulfamic acid and sodium borohydride, which react with arsenic acid to produce arsine gas. A piece of filter paper atop the flask impregnated with mercuric bromide catches the gas, which reacts with the mercury compound to form a colorful complex, H2As–HgBr. The darker the paper becomes—ranging from light yellow to dark brown—the greater the concentration of inorganic arsenic in the rice.

To determine concentration, the color readout is compared visually with that of standards, or using a spectrophotometer if available. With a 5-g sample, the method has a quantification limit of 50 μg/kg inorganic arsenic, or half the EU limit for baby-food rice.

The researchers analyzed 30 rice samples with the field kit and with HPLC-ICP-MS. The field kit results were reproducible within 12%, and were within 7% of those from the HPLC. Moreover, the kit produced less than 10% false-positive and false-negative results for assessing the EU limit on baby-food rice, and none for that on white rice. For a field-based screening method, this exceeded the researchers’ expectations, Feldmann says.

Because it involves boiling a strong acid and produces arsine gas, the test must be done in a well ventilated room by trained personnel, and with proper waste disposal.

Brian P. Jackson, an environmental analytical chemist at Dartmouth College, calls the method an “innovative adaptation.” Given the recent regulations on arsenic in rice, he says, “it seems reasonable to suppose that there’ll be a demand for a field test kit that will allow producers and suppliers to quickly know whether the rice is below the regulatory limit.”

Comments
William Eyl (November 4, 2015 5:22 PM)
This is great! Do they have any idea when such kits will be available to the small producer? Also what the approximate cost of the kit will be?
Finally, if the small producer eventually has access to the kit, it should include instructions for disposal of the hazardous waste products.
Reply »

Joerg Feldmann (November 6, 2015 4:15 AM)
Yes, indeed the Mercury bromide is harmful and needs to be disposed off in the appropriate way. this is a disadvantage of the kit and we are currently working on an environmentally friendly version.
Reply »

Robert Buntrock (November 5, 2015 4:27 PM)
Good news but it involves some nasty stuff (especially arsine) which may present more of a hazard than the original arsenic. Also, is it specific for the toxic inorganic arsenic?
Reply »

Joerg Feldmann (November 6, 2015 5:10 AM)
Yes, of course the field is only measuring the toxic inorganic arsenic and not the organoarsenic compounds such as DMA and MMA. It is very specific.

Well, arsine is indeed nasty, but this is generated inside the flask and will be absorbed quantitatively by the mercury bromide strip. We however suggest to do the test is a well ventilated area in case arsine is escaping from a flask. After the reaction time, no arsine should be generated. Hence, the extract can be easily be desposed off.
Reply »

George Fleck (November 5, 2015 4:39 PM)
What are the odds that the kit will have approval from local chemical safety officials?
Reply »

Joerg Feldmann (November 6, 2015 5:04 AM)
This method is a screening method. That would mean that rice producers can identify the rice samples which are at risk to reach the maximum limit. Only those samples are then send to a lab, who will analyse the rice with an expensive but accepted lab-based method.

The question you need to ask the authorities at which level measured with the field kit would the safety officials suggest to test the rice with a lab based method?

Currently I cannot second guess what the authorities do. More tests are needed to be done with this method to get more data, before officials will make a decision.
Reply »

Herman Rutner, (November 7, 2015 9:21 PM)
Arsenate is toxic but arsenite rapidly formed by reduction with ascorbate is not, clearly not at 50 ug/ kg, and indeed is an essential trace nutrient.
Reply »

Julian Tyson (November 24, 2015 7:18 AM)
Hi Herman,
I would be very interested in learning more about the background to your statement that arsenic in the form of arsenite is an essential trace nutrient. Can you point me in the direction of some journal articles or studies? Thanks very much.
Reply »

Elizabeth Carroll (May 8, 2016 8:45 AM)
Hello, is this kit available to purchase? We are interested in this method for a middle school science project. Please feel free to contact me directly
Reply »

Lilian Seiko Kato (August 18, 2016 10:39 AM)
This is amazing, congratulations Professor Feldmann! Does the kit is available commercially? Thank you!
Reply »