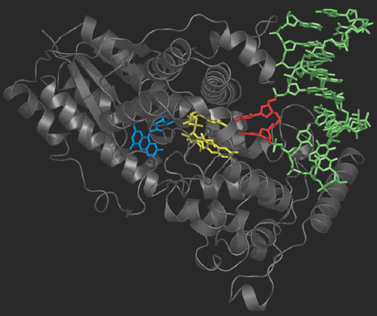 Credit: Courtesy of Johannes Gierlich
Sancar was the first to isolate a DNA photolyase enzyme, which use light to repair DNA damaged by UV radiation. Here, a photolyase (gray ribbon) flips a toxic cyclobutane pyrimidine dimer (red) out of the DNA helix (green) to repair it using a catalytic flavin cofactor (yellow). The enzyme’s light harvesting antenna pigment is shown in blue.

The 2015 Nobel Prize in Chemistry has been awarded jointly to Tomas Lindahl of the Francis Crick Institute and Clare Hall Laboratory in England, Paul Modrich of Duke University School of Medicine, and Aziz Sancar of the University of North Carolina School of Medicine for their mechanistic studies of three different types of DNA repair.

Our genetic material is constantly damaged. “As a rough estimate there are 10,000 DNA lesions per day per cell,” says Thomas Carell, who studies DNA repair at Ludwig Maximilian University in Munich, Germany. For example, every time DNA gets replicated, there’s a chance of the wrong base being inserted at a crucial spot. At the same time, chemicals or radiation can damage DNA bases.

“There’s no way to establish life based on such a fragile molecule without having sophisticated machinery to keep it in order,” Carell says. If these mistakes or damage don’t get fixed, they can lead to cancer or other diseases. “DNA repair is absolutely important to genome stability and of course to life.”

“I’m totally excited,” Carell adds. “The field is really deserving and all three winners have made extraordinary contributions.”

Lindahl focused on the repair system that kicks in when cytosine loses an amino group to form uracil. When this happens—which it does spontaneously on a routine basis—the uracil tends to pair with adenine instead of the guanine that cytosine is supposed to pair with. In 1974, Lindahl identified the first known repair protein, uracil-DNA glycosylase, which removes these erroneous uracil bases. Later, he discovered a second enzyme specific for damaged adenine. These turned out to be just two of a large family of proteins involved in so-called base excision repair. More than two decades later, Lindahl was able to recreate the human base excision repair process in vitro.

Sancar, a Turkish scientist working in the U.S., figured out the process by which cells repair UV damage by excising an entire nucleotide, rather than just the base. He found that an enzyme known as an exinuclease cuts out the damage, taking a piece about 12 nucleotides long in total.  Then DNA polymerase fills in the gap, and DNA ligase stitches the pieces back together.

Modrich elucidated how cells repair mismatched bases in DNA. He showed that bacteria use an enzyme called dam methylase to mark damaged DNA with methyl groups that guide a restriction enzyme to cut in the right place. In 1989, he reported a system that could repair DNA mismatches in vitro. That system required DNA polymerase III, exonuclease I, and DNA ligase and was guided by DNA methylation. However, because methylation functions differently in bacterial and human systems, scientists still don’t know exactly how the system knows which strand needs to be repaired.

“The repair mechanisms that the Laureates have elucidated are all about the making and breaking of chemical bonds,” says Diane Grob Schmidt, president of the American Chemical Society, which publishes C&EN. “It’s chemistry in a biological context. It also illustrates the multidisciplinary aspects of this type of research and the grand challenges that we’re all trying to solve.”

Comments
Kenrick Francis (October 7, 2015 11:22 AM)
Continue the great work you are doing in the advancement and understanding of SCIENCE. CONGRATULATIONS in being awarded this renown prize . May God continue to bless you in unraveling more of His mysteries.
Reply »

Fatma (October 7, 2015 11:27 AM)
As a Turkish chemical engineer,I am proud of Mr.Sancar and his collegues's achievement and I believe Turkish scientists will be able to achieve a number of breakthrough events in the next years.
Reply »

Trean Blumenthal (October 7, 2015 3:17 PM)
This is really cool and the article provides an excellent explanation of the processes.
As a chemist who is also very interested in genetics and genomics, I realize that this scientific work is excellent and very important. Congratulations to the winners, their sponsors, and their teams. Thank you for high quality journalism.
ACS member for many years, Trean Korbelak Blumenthal

Robert Buntrock (October 7, 2015 4:40 PM)
I agree, this is a great presentation on the science behind the awards, very clear and much better than other announcements. I had previously heard a figure of 5,000 DNA lesions per day per cell but 10,000 is even more spectacular. Any toxicity study must take these data, both damage and repair into account for the net effect on cells.
Reply »

Nasri Nesnas (October 7, 2015 6:48 PM)
A great and clear explanation of the science behind this well deserved award. Congratulations to the winners who brought attention to the need of understanding biological mechanisms at the detailed level of chemical bonds and molecular interactions.
-Nasri Nesnas, Florida Institute of Technology
Reply »

Jelenka Savkovic-Stevanovic (October 11, 2015 5:21 AM)
Congratulation in being awarded. Any toxicity study must be take this.What about enzymes kinetics?
Reply »

Muazu Samaila Batagarawa (October 12, 2015 10:38 AM)
Congratulations to winners of the Chemistry Nobel prize. What more on earth is not Chemistry!!!!
Reply »

Raji Heyrovska (October 14, 2015 9:52 AM)
Congrats to excellent DNA chemists! It might be of interest to the readers to see the detailed atomic structure of DNA at: http://arxiv.org/abs/0708.1271v4 and of DNA damage at: http://precedings.nature.com/documents/6891/version/1
Reply »

Vic Agbasi (October 16, 2015 5:39 AM)
Congratulations on your awards. We are very proud of you. Any chance of coming to motivate our students at El Centro College in Dallas Texas? Our students and the Chemistry club would love it. Thank you.
Reply »

Leunis van Rooyen (October 20, 2015 11:52 AM)
Nucleotides are the most basic organic nutrition. The body’s digestive system can absorb the nucleotides as part of our daily diet. If the five different nucleotides are served in even quantities and in a concentrated format, the stomach should absorb it. Unfortunately, most popular foods do not have nucleotides, such being fruits, vegetables, meat and fish. Therefore, nucleotides should be taken as an essential daily supplement.
Reply »