STRIPPED DOWN
[+]Enlarge
Credit: Eric Nallon
A plain graphene sensor created by U.S. Army engineers detects a wide range of gases, increasing its appeal for electronic noses. The dimensions of the sensor inside the brown and gold frame are 1 cm by 1 cm. 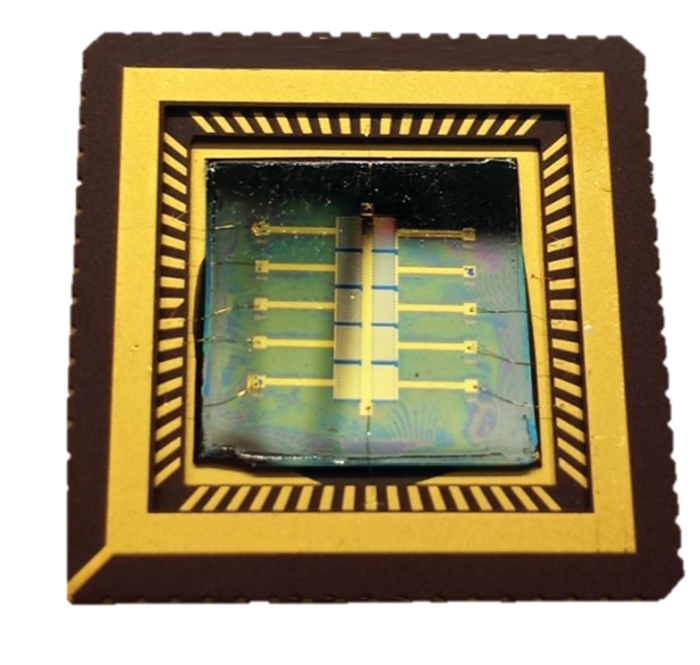 Credit: Eric Nallon
A plain graphene sensor created by U.S. Army engineers detects a wide range of gases, increasing its appeal for electronic noses. The dimensions of the sensor inside the brown and gold frame are 1 cm by 1 cm.

Once physicists found a simple method for isolating graphene in the early 2000s, graphene’s popularity quickly grew. The single layer of flat, pure carbon holds particular appeal to sensor engineers because every atom is a surface atom ready to respond to the surrounding environment. Yet graphene’s baseline sensing capabilities have not been well explored.

Eric Nallon, an electrical engineer with the U.S. Army, decided to better characterize graphene’s gas-sensing performance. Nallon and coworkers started with a 1-cm2 layer of graphene on a silicon dioxide base. They patterned gold-titanium electrodes on top to create a chip that senses gases. Volatile compounds brought close to the sensor sway graphene’s surface electrons and alter its electrical resistance. Different molecules generate different changes in graphene’s resistance over time, creating a response profile that can be like a molecular fingerprint.

For a single, unadorned sensor, Nallon says, these are compelling numbers. “These results would be more typical for a sensor array.” Graphene is already relatively cheap and works quickly and dependably at room temperature. Nallon’s results suggest graphene is an excellent base for creating small, low-powered electronic noses, which can be built to specifically seek out explosives, chemical warfare agents, environmental contaminants, bacteria, viruses, drugs, or human illness. Nallon is currently working on modifying graphene’s surface to create adaptable arrays for such applications.