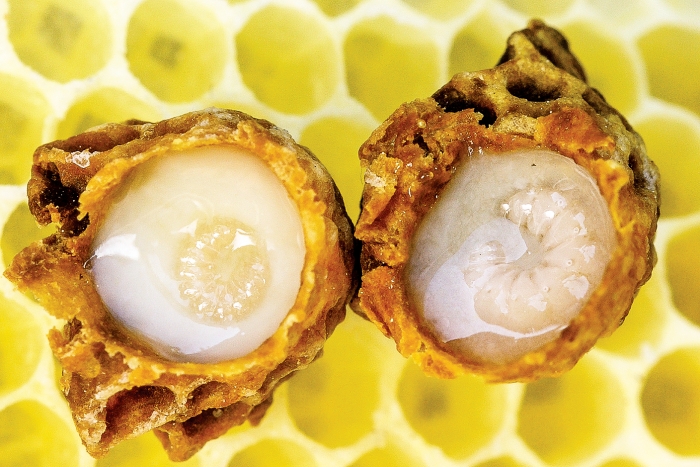 Credit: Wikimedia Commons/Waugsberg
A species-specific modification of a protein in royal jelly (shown surrounding queen bee larvae) could explain why Eastern honeybees are less susceptible than Western honeybees to a fatal bacterial disease.

Royal jelly, a milky secretion of worker bees, feeds and helps support the immune system of honeybee larvae for their first few days, and nourishes queen bees for life. A new study shows that the modification of a protein in royal jelly could explain why one species of honeybees is more resilient than another to a deadly bee disease called American foulbrood. What’s more, the researchers have identified another modified protein in royal jelly that could have potential for treating hypertension in humans (J. Proteome Res. 2015, DOI: 10.1021/acs.jproteome.5b00829).

American foulbrood is one of the most lethal diseases affecting the Western honeybee (Apis mellifera), the most common species kept by beekeepers. Though the bacterial infection affects only up to 5% of colonies, it’s an ongoing concern for beekeepers because it is highly contagious and nearly impossible to cure. Once the disease is established, it can kill a colony in weeks, and the most effective way to control it is to burn the whole colony, says Leonard J. Foster, a biochemist who studies bee proteins at the University of British Columbia and was not part of the study. In contrast, Eastern honeybees (Apis cerana) are less susceptible to this disease.

In an effort to understand these differences, Jianke Li of the Chinese Academy of Agricultural Sciences and his colleagues analyzed the royal jelly proteins of the two species using liquid chromatography with tandem mass spectrometry. Previous studies have shown that species-specific differences in the protein composition of royal jelly can lead to variability in morphology and gene expression among species. In this study, the team examined differences in patterns of glycosylation—a carbohydrate-adding modification—between the two sets of proteins. These protein modifications can affect many aspects of biology, including growth and immunity.

Most of the major proteins in royal jelly showed different glycosylation patterns across the two species. The team exposed three of these major proteins, with their species-specific modifications, to growth medium containing the bacteria that cause foulbrood. One of these, called major royal jelly protein 2, inhibited the growth of the bacteria. But the glycosylated protein from the Eastern honeybee was more potent: It took half as much to cause the same bacterial growth inhibition as the protein from the Western honeybee.

Although this effect may not fully account for the difference in susceptibility to foulbrood observed between the two species, “this is certainly a novel explanation for something that hasn’t really been explained well previously,” comments Foster. He adds that the modified protein could potentially be developed as an antibiotic to prevent the disease.

The team also found that glycosylated major royal jelly protein 1 from both species inhibited the migration of mouse aortic vascular smooth muscle cells, a test used to determine protection against hypertension. This suggests that the modified protein could be a candidate for treating high blood pressure.

Royal jelly is a popular dietary supplement, though the European Food Safety Authority says that its promised health benefits aren’t strongly supported by scientific evidence. Foster says the antihypertensive finding is preliminary but worth following up on.

Comments
nicephotog (November 27, 2015 10:02 PM)
As that is, one of the problems encountered in Australia with engineering and modifications to engine parts and mounts is heat transfer and build-up amplification.

Sizes of hive and frames above Warre carry high density larger wall areas for sunlight to collect of which such hives are often commercial and placed in sunlight directly.
It appears the Laboratory culturing temperature of foulbrood is optimum at 45 degrees Celsius.
If you were to put a thermometer inside the brood chamber when measuring station temperature somewhere nearby was 30 deg. Celsius, the brood chamber may easily be above the larvae pupa gestation temperature of 32 - 38 degrees Celsius.

Any substance loses/transfers heat "also" by infra red , not merely conduction, thereby a better understanding of heat can be expressed as the temperature of an object is not because of how much heat is input to the object but "how much heat cannot be lost/transferred away as heat is being input" !!!

The Dynamics of heat exchange by infra red is not dissimilar to a light bulb and its radiation and reflection of output onto surfaces relating transfer, however it may be better demonstrated in a Langstroth hive super as the bars in a nuclear power station generator and their exposure to each other to excite radioactive ground state level.
Reply »