ANTIMICROBIAL SANDWICH
[+]Enlarge
Credit: ACS Macro Lett.
A coating extends its microbe-killing lifetime by exposing a fresh surface after a period of time. The coating consists of two layers of an antimicrobial polymer (SMAMP, red) with a degradable poly(sebacic anhydride) layer (blue) in between. The top layer also contains a fluorescent dye (green) for testing purposes. 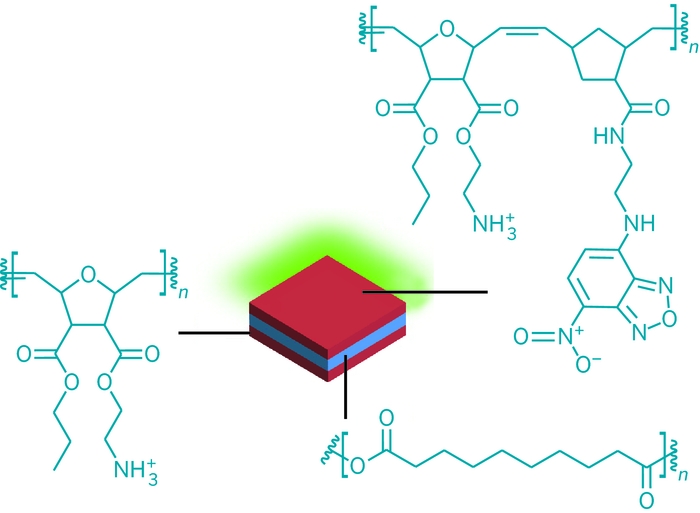 Credit: ACS Macro Lett.
A coating extends its microbe-killing lifetime by exposing a fresh surface after a period of time. The coating consists of two layers of an antimicrobial polymer (SMAMP, red) with a degradable poly(sebacic anhydride) layer (blue) in between. The top layer also contains a fluorescent dye (green) for testing purposes.

Antimicrobial surfaces can kill bacteria, helping to prevent medical devices from causing infection, or algae from fouling the hulls of ships. But eventually, dead bacteria, proteins, and other biological molecules build up a coating on the surfaces, rendering them useless. Now researchers have developed a way to let such materials shed their skin, exposing a fresh, microbe-killing layer (ACS Macro Lett., 2015, DOI: 10.1021/acsmacrolett.5b00686).

The trick is to create two discrete layers of antimicrobial material, separated by a degradable polymer, says Karen Lienkamp, a polymer scientist at the University of Frieburg. As the top layer wears out its bacteria-killing abilities, the polymer underneath it breaks up, casting the top layer away and exposing the unsullied bottom layer. Though there’s no connection between the sullying and the breakup, ideally the degradation rate of the polymer would match the useful lifetime of the top layer, Lienkamp says. The team built their layered material on a silicon substrate functionalized with benzophenone molecules. On the substrate, the team applied a poly(oxonorbornene)-based mimic of an antimicrobial peptide (SMAMP), mixed with a tetrathiol cross-linker. When the researchers exposed the mixture to ultraviolet light, the polymer cross-linked and reacted with the benzophenones, sticking to the substrate. On top of the first layer, they placed a layer of poly(sebacic anhydride), which dissolves safely within the human body over several days. Finally, they added a second SMAMP layer—this time with dye added so they could visually distinguish it from the bottom layer—and again cured it with UV light.

To allow the layers to separate cleanly as intended, they used a couple of different strategies. They made the layers 100 nm thick, much thicker than typical thin films, which reduced the effect of electrostatic forces that might hold the layers together, Lienkamp says. The team also had to make sure no covalent bonds were formed across the layers. “The adhesion that holds them together has to be just strong enough, but not too strong,” she says. The forces holding the layers together are probably based on non-polar interactions between molecules, she says, though that hasn’t been proven.

For a speeded-up test of the degradation process, Leinkamp’s team bathed their material in hydrochloric acid and watched with fluorescence microscopy as the dye-laced layer came off. Then, to show that the underlying layer was clean enough to kill microbes, they sprayed it with Escherichia coli bacteria. No bacteria were detected on the newly exposed surface, nor on material with the top layer intact, whereas approximately 1,000 bacterial colonies grew from cells on a blank silicon wafer used as a control.

Gregory N. Tew, a polymer chemist at the University of Massachusetts, Amherst, who was not involved in the work, says there are several steps between this proof-of-concept work and a practical coating, including demonstrating that it works well enough for a given application, and getting it through regulatory review for use in humans. Still, he thinks the work is promising.

Lienkamp says it should be possible to extend the lifetime of a coating by adding more layers and using a series of polymers that degrade at different rates.

Coatings
Protective fabric fixes itself with help from squid proteins
Materials
Mussels Inspire A Super Slippery, Antifouling Coating
Materials
Researchers Peel And Stick Nanostructures To Various Materials
Share X
To send an e-mail to multiple recipients, separate e-mail addresses with a comma, semicolon, or both.
Title: Microbe Killer Sheds Its Skin
Author: Neil Savage
Chemical & Engineering News will not share your email address with any other person or company.

Comments
Ian D MacLeod (December 16, 2015 4:14 PM)
What a joy it is to read of such clever chemistry being done for the good of human kind
Reply »

Jerome Zoeller (December 16, 2015 4:37 PM)
Iron salts of carboxyllic acids are very slightly sensitive to hydrolysis in aqueous environments, to liberate the free acid. Technologies based on this have been in place ( very quietly ) for several decades for the slow release of bioacive components in applications in agriculture, medicine, and warfare. The "sebacid sandwich " is the latest, and most elegant, approach to such slow release applications .
Reply »