Financial results were lackluster for the major drug companies in 2015

Bigger isn’t necessarily better when it comes to drug company profitability. In 2015, as in the previous two years, the four most profitable firms were all in the biotechnology sector, rather than among traditional large pharmaceutical makers.

That said, the traditional line between the biotech industry and big pharma has been blurred by the likes of Amgen and Gilead Sciences. Innovative products, sold in low volumes but with high price tags, are pushing sales and earnings of the biotech firms into a new dimension. Such specialized products are frequently also the means by which large pharma companies are trying to turn around their declining sales and earnings.

Although they are making progress, the big pharma firms have yet to succeed. In 2015, combined sales and earnings for 11 leading companies were both down by about 1%. In terms of growth, the better performers were AbbVie, Bristol-Myers Squibb (BMS), and Sanofi. The laggards included AstraZeneca, Johnson & Johnson, Merck & Co., and Novartis.

For the big pharma group, the combined profit margin, or earnings as a percentage of sales, remained flat, at just under 24%. Meanwhile, the biotech firms Amgen, Biogen, Celgene, and Gilead all had profit margins above 36%. Gilead’s hit an astounding 59%.

Gilead’s $19.2 billion in 2015 earnings ranked it first among both biotech and drug companies, while its sales of $32.6 billion placed it eighth. The company’s hepatitis C combination drug Harvoni, launched only in October 2014, accounted for 43% of its 2015 sales. At $13.9 billion in 2015 sales, Harvoni threatens to pass AbbVie’s Humira as the world’s largest-selling drug.

Harvoni is a replacement for Gilead’s Sovaldi, and sales of that drug fell about 50% last year to $5.3 billion. In a similar way, Sovaldi’s launch just two years ago had a negative impact on Vertex Pharmaceuticals’ hepatitis C drug Incivek. When Incivek launched in late 2011, it was among a new class of hepatitis C agents, and sales skyrocketed. But by August 2014, Vertex stopped making it because of fierce competition.

This replacement cycle signals an emerging, and unsettling, trend of drugs that launch big but flame out quickly. New hepatitis C therapies have “serially smashed records for the fastest launches ever, risen to multi-billion-dollar blockbuster status in the shortest times ever, and then shown every indication that their commercially viable lives will also be unusually short, ending well in advance of patent expiry,” the market research firm IMS Health pointed out in a recent report. 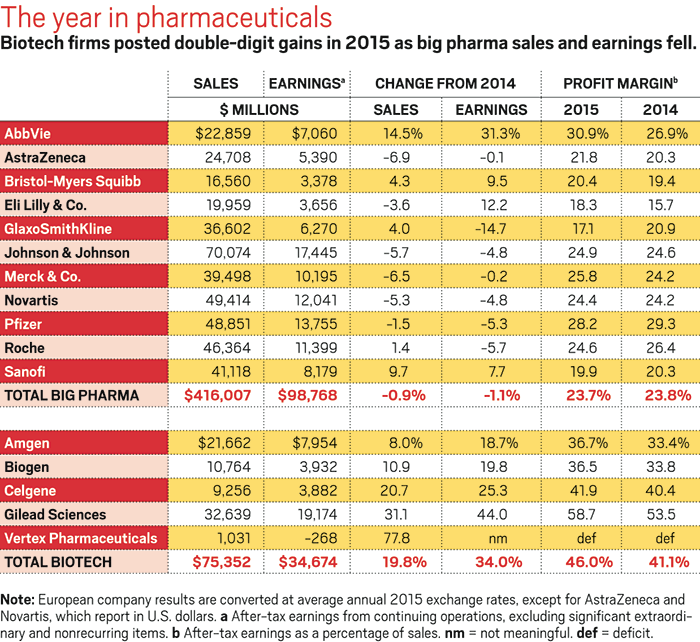 As a company, Vertex has rebounded, passing $1 billion in annual sales again. Its focus today, though, is on cystic fibrosis drugs. Vertex’s two main products, Kalydeco and Orkambi, brought in $632 million and $351 million, respectively, last year.

Launched in July 2015, Orkambi is predicted to pass $2 billion in annual sales by 2020 and be joined by other Vertex products for cystic fibrosis, Leerink stock analyst Geoffrey Porges wrote in a recent report to clients. Vertex’s total sales will exceed $2 billion next year, he anticipates, and reach between $3 billion and $4 billion by 2017.

Like Vertex in cystic fibrosis, Celgene has put its focus on cancer, to good financial effect. Drugs targeting hematologic cancers made up about 80% of Celgene’s 2015 sales, which rose 21% to $9.3 billion. This year, the company anticipates breaking the $10 billion mark.

Porges anticipates that Celgene’s hematology franchise could more than double to $16 billion in annual sales by 2020. The firm also is building a solid-tumor oncology business around Abraxane, which generated almost $1 billion in 2015 sales.

Celgene entered the anti-inflammatory area in 2014 with Otezla, approved for treating psoriasis and psoriatic arthritis. With further approvals, Celgene could see this area grow fourfold to near sales of $2 billion in 2020, Porges predicts.

These leading biotechs aren’t the only ones gaining ground on big pharma. In 2015, the U.S. Food & Drug Administration approved 45 new drugs. About half of them came from companies outside the 16 established biotech and pharma firms tracked by C&EN, and half of those were from small companies.

The market has been shifting from large-volume, small-molecule drugs in primary care areas to specialty products, often biologics, in areas such as oncology. Over the past 10 years, the share of specialty drugs, by market value, rose from 16% to 26% of total sales, according to IMS Health. Drivers include reduced development timelines and costs, as well as higher approval rates and pricing.

Not only are small companies attracted to developing specialty products, but big pharma is moving this way as well. In fact, the share of its pie devoted to specialty drugs moved from 18% to 33% last year. Looking at what’s in big pharma’s drug development pipeline, IMS Health concluded that this trend will continue to 2020.

It’s not surprising, then, that in 2015 FDA approved more drugs for orphan and rare diseases than in any previous year. Nearly half of the 45 drugs approved fit this bill, up from 33% in 2012. Despite targeting small patient populations, many of these drugs are quickly nearing blockbuster status by posting annual sales of more than $1 billion.

Among them is BMS’s cancer drug Opdivo, which was approved in 2014 and hit the market in 2015. Used to treat lung, kidney, and skin cancers, the drug grew to have sales of $942 million. Late in 2015, as part of an ongoing effort to build its immuno-­oncology business, BMS and partner ­AbbVie launched another orphan cancer drug, Empliciti.

In 2015, FDA approved 45 new drugs. About one-quarter of them came from small companies.

Empliciti, J&J’s Darzalex, and Takeda Pharmaceutical’s Ninlaro are all orphan multiple myeloma drugs approved in late 2015. Although too early to tell for sure, they are expected to quickly displace others and become blockbusters. In fact Novartis’s Farydak, a multiple myeloma treatment that won FDA approval early in the year, didn’t even warrant a mention in the company’s 2015 results.

Novartis is setting its sights instead on the heart failure drug Entresto and psoriasis treatment Cosentyx, both approved in the first seven months of 2015. Cosentyx had just $261 million in 2015 sales. And the company reported “modest sales” of Entresto because of insurance coverage problems. To get past these, Novartis recently entered a pact with major insurers that links pricing to heart patient outcomes.

Other potential blockbusters approved in 2015 were two high-cholesterol drugs: Repatha from Amgen and Praluent from Regeneron Pharmaceuticals and Sanofi. Both were approved in the U.S. and Europe but attracted negative attention for prices. In approving the drugs in the U.S., FDA limited the patient populations, thus holding IMS Health’s forecast for peak sales to around $2 billion per year each, lower than some earlier predictions.

Interestingly, it’s a high-cholesterol drug, Pfizer’s Lipitor, that had long been the classic example of a blockbuster, according to IMS Health. It grew to peak sales of $13 billion and spent about 16 years on the market, racking up lifetime sales of $141 billion.

The top-selling drug in 2015, AbbVie’s anti-inflammatory agent Humira, has followed a similar path. It has been a multi-billion-dollar drug for more than a decade, amassing more than $77 billion in sales. Although Humira is on track to lose patent protection this December, AbbVie expects the product’s sales to continue to grow for another few years as it’s approved in more indications.

At the same time, AbbVie is banking on potential blockbusters in the hepatitis C and orphan cancer drug areas. These include Viekira Pak for hepatitis C, which has stumbled a bit because it carries a risk of liver injury, and the leukemia drugs Imbruvica and venetoclax, the latter of which is expected to reach the market this year.

“Compressed product lifecycles and smaller lifetime returns imply the need to launch more products, more rapidly, to a consistent standard of excellence,” the firm said. It cautions, however, that hitting all three of these targets is something that “the top 20 companies historically are not good at.”

Business
A decent first half for pharmaceutical firms
Business
Leading Drugs Under Fire In 2015
Business
Pharma Bets Big On New Products
Share X
To send an e-mail to multiple recipients, separate e-mail addresses with a comma, semicolon, or both.
Title: Biotech sales and earnings outpace big pharma
Author: Ann M. Thayer
Chemical & Engineering News will not share your email address with any other person or company.