The enzyme MTH1 is a hot cancer drug target. Spurred in part by a pair of 2014 Nature papers that reported MTH1 inhibitors can kill cancer cells (C&EN, April 7, 2014, page 9), more than 20 industry and academic groups have started programs to develop small molecules to shut down the enzyme.

In those 2014 papers, the research teams—one led by Thomas Helleday of the Karolinska Institute and the other by Giulio Superti-Furga of CeMM, the Research Center for Molecular Medicine of the Austrian Academy of Sciences—showed that MTH1 inhibitors attack cancer cells by blocking a process that protects the cells from the effects of oxidative stress (Nature 2014, DOI: 10.1038/nature13181and 10.1038/nature13194). Cancer cells operate under oxidative stress, which can kill the cells by damaging their DNA bases. MTH1 prevents the incorporation of bases damaged by oxidation into the DNA replication process, permitting cancer cells to proliferate and thrive. 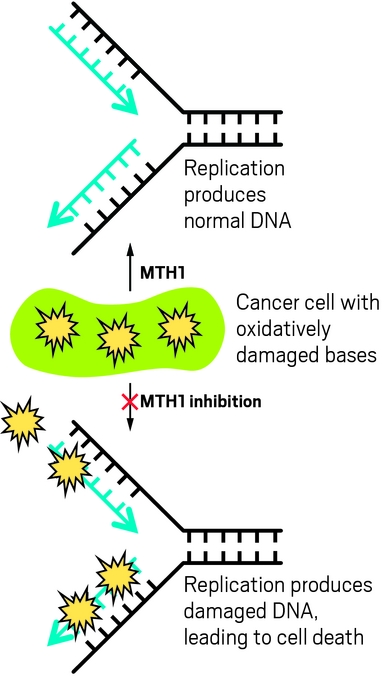 Blocking MTH1 may not be a deathblow to cancer cells.

However, new research suggests that blocking MTH1 may not be a deathblow to cancer cells and that the cancer-killing abilities of reported MTH1 inhibitors may not be due to shutting down the enzyme.

Furthermore, the team showed that cancer cells remained viable after silencing the MTH1 gene using siRNA or CRISPR. MTH1 inhibitors still killed these cells, further supporting the conclusion that other mechanisms besides MTH1 inhibition are at play.

Kettle notes that an additional unpublished study by a “leading U.K. organization also fails to validate the MTH1 mechanism.” The AstraZeneca group concludes that the enzyme’s role in cancer cells and the usefulness of inhibiting it remain uncertain.

On the basis of the new findings, more careful study is now needed on MTH1’s role as a cancer drug target, says MTH1 specialist Yusaku Nakabeppu of Kyushu University. Chuan He, an expert on nucleic acid modifications at the University of Chicago, calls the siRNA knockdown and CRISPR knockout data “quite convincing” and agrees that “more work is required to assess the role of MTH1 in cancer cell survival.”

But not all researchers in the field are ready to abandon MTH1 just yet. Oxidative stress expert Priyamvada Rai of the University of Miami Miller School of Medicine says, “Our independent research consistently supports MTH1 as a valid target in cancer cells that sustain oxidative stress.” Also, the anticancer abilities of molecules cannot always be investigated effectively with cell studies such as those used in the two new papers, says Jessica Martinsson, head of medicinal chemistry at Sweden’s Sprint Bioscience, which has worked on MTH1 inhibitors.

[+]Enlarge
These four molecules all inhibit MTH1. The top two—(S)-crizotinib (left), studied by Superti-Furga and coworkers, and TH287 (right), developed by Helleday’s group—kill cancer cells. But the bottom two inhibitors—developed by Petrocchi’s group (left) and by Kettle and coworkers (right)—do not. 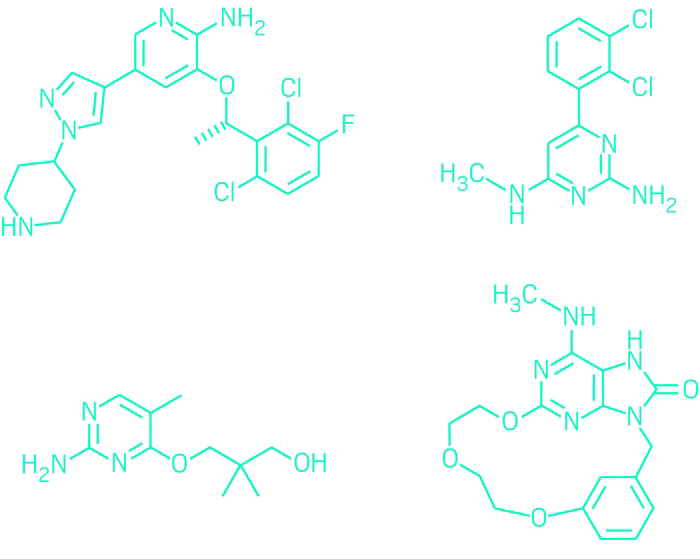 These four molecules all inhibit MTH1. The top two—(S)-crizotinib (left), studied by Superti-Furga and coworkers, and TH287 (right), developed by Helleday’s group—kill cancer cells. But the bottom two inhibitors—developed by Petrocchi’s group (left) and by Kettle and coworkers (right)—do not.

Helleday and Superti-Furga still think MTH1 inhibition plays a key role in their compounds’ abilities to attack cancer. Superti-Furga wonders whether the discrepancies between the 2014 papers and the recent reports are due to intricacies in the regulation of the MTH1 pathway, which isn’t well understood. He adds that if MTH1 inhibitors do have effects in the absence of MTH1, then it will be important to find out what the additional targets are.

Helleday points out that the new findings are reminiscent of recent developments on another cancer drug target, poly(ADP-ribose) polymerase (PARP). There isn’t a detailed understanding of how inhibiting the enzyme kills cancer cells, he says, but this hasn’t stopped a PARP inhibitor—AstraZeneca’s Lynparza (olaparib)—from being approved by the Food & Drug Administration for treatment of ovarian cancer and getting expedited review status for treatment of prostate cancer.

“The underlying MTH1 biology is much more complex than PARP biology,” Helleday says, “so we cannot exclude as-yet-unknown interactions that could act synergistically to produce the impressive cell-killing effects we observe with our compounds. I am convinced that connecting scientists across the world using open innovation, we can solve this complex puzzle together, in time.”

Comments
Anon (March 2, 2016 4:17 AM)
Interesting article, Helleday Laboratory has realised a statement that you can read here: http://helleday.org/thomas-helleday-team-comments-on-two-recent-reports-on-mth1-inhibitors-appearing-in-the-literature-2/
Reply »