Agency would require consideration, not implementation, of inherently safer technologies 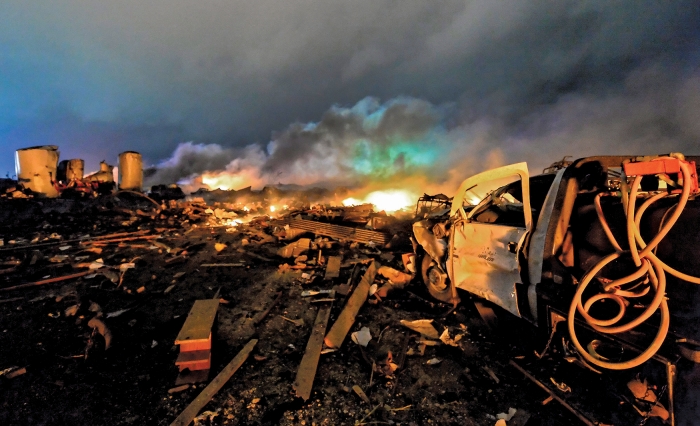 Credit: Larry W. Smith/EPA/Newscom
A fire-sparked fatal explosion of tons of ammonium nitrate destroyed a swath of West, Texas, in 2013.

Chemical companies and refineries would have to consider inherently safer technologies and, in some cases, undergo independent third-party safety audits under a new Environmental Protection Agency proposal.

The proposal, announced on Feb. 25, would modify existing regulations that require 12,500 facilities that handle highly hazardous chemicals to develop risk management plans (RMPs). Over the past decade, some 1,500 accidents have occurred at these facilities, causing 60 deaths and 17,000 injuries, according to EPA.

President Barack Obama ordered EPA to reexamine its RMP regulations after a 2013 ammonium nitrate fertilizer explosion that killed 15 people, mostly firefighters, at a farm supply warehouse in West, Texas. This move was part of a presidential order directing federal agencies to examine their health and safety regulations. This is the first regulatory proposal to result from Obama’s directive.

EPA’s proposal would, for the first time, require a subsection of companies, including chemical makers and refineries, to consider using alternative, safer technologies as they regularly update their RMPs, which is required at least every five years.

The Coalition to Prevent Chemical Disasters, a mix of community groups, unions, and others, faults the proposal for failing to make the safer technology analysis public and for covering too few companies. The organization point outs that 87% of facilities that must have RMPs would be exempt from the proposed new requirement.

Also, the proposal would require companies that have chemical accidents to hire an independent third party to conduct compulsory safety audits, rather than doing these audits themselves, as they do now, Stanislaus says. And after an accident or a near-miss incident, companies would have to conduct root-cause analyses and prepare incident reports for EPA.

The American Chemistry Council, an industry association, warns that the proposed audits and examination of safer alternative technology “will create unnecessary and potentially detrimental complexity.”

The U.S. Chemical Safety Board has for years urged EPA to add reactive chemicals, such as ammonium nitrate, to the substances regulated under the RMP program. However, the proposal would not do so. Consequently, EPA’s proposal will have no effect on facilities like the West warehouse.

Stanislaus says finalization of the proposed regulation is a top priority for his office but would provide no estimate of when it would be completed.