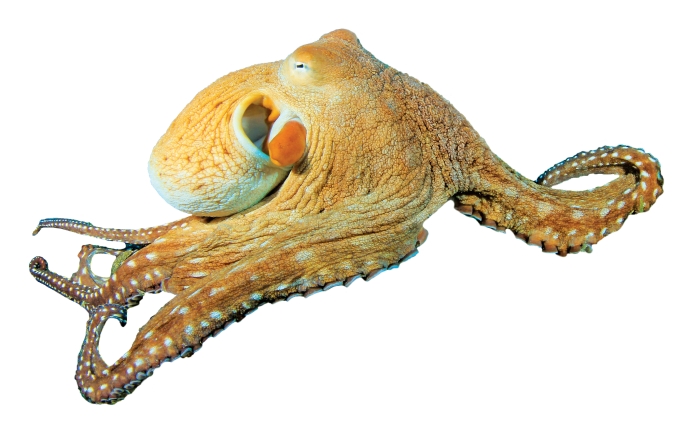 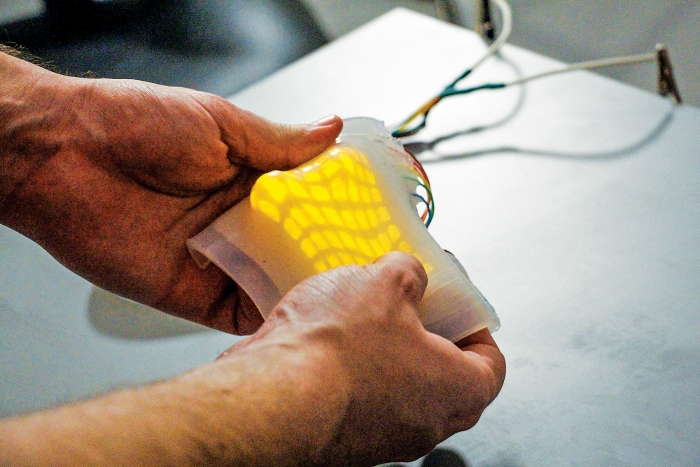 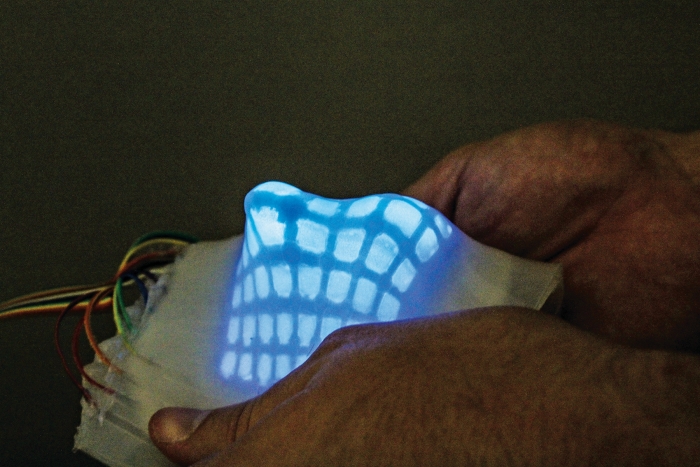 Mn-doped (yellow) and Cu-doped (blue) ZnS give this stretchy skin its color-shifting abilities.

With their lithe limbs, stretchy skin, and colorful camouflage, octopuses have many admirers among scientists and engineers. Soft robotics makers, for example, aim to mimic the creatures’ ability to slip into small spaces. Camouflage experts would like to create tunable color surfaces similar to those octopuses use to evade predators.

Inspired by the octopus’s shape- and color-shifting abilities, researchers have now created a superstretchy skin that lights up in different colors. The electroluminescent material could find use in soft robotics and as wearable displays, such as smart sleeves that double as screens.

Researchers led by Cornell University’s Robert Shepherd developed the smart skin, which features a stretchy ionic hydrogel made from aqueous lithium chloride in a polyacrylamide elastomer. This material was first reported in 2013 by Harvard scientists George M. Whitesides and Zhigang Suo. Shepherd’s team was able to incorporate that hydrogel into a working device that can also light up in different colors (Science 2016, DOI: 10.1126/science.aac5082).

Shepherd’s smart skin has five layers. At its core is an electroluminescent layer of silicone that lights up in different colors when electrified, thanks to phosphor-doped zinc sulfide powder. Small amounts of copper dopants produce skin that lights up blue or green, and manganese gives the skin a yellow hue. To produce white light, the team mixes these metals.

This core layer sits between two layers of ionic hydrogel, which serve as electrodes that supply electricity to the core. These three layers are then sandwiched between layers of silicone.

Shepherd and coauthor Chris Larson say that it was challenging getting the hydrophilic hydrogel to bond to the hydrophobic silicone. Ultimately, they had success by using ozone to cleave the silicone’s surface Si–O bonds, creating surface hydroxyl groups. This modified surface allowed for good adhesion between the layers.

Shepherd’s team showed that the skin can stretch up to six times its original length in one direction. That’s significantly more pliable than other stretchable displays, which only extend to about twice their original size. The researchers also incorporated the skin into a soft robot that lights up as it inches along.

“This represents a very nice step forward in highly stretchable displays and sensors that will undoubtedly be useful in applications of soft robotics,” comments Michael Tolley, an expert in bioinspired robotics at the University of California, San Diego. “I can imagine this type of display and sensor being used for systems built for human-robot interaction in the context of service robotics, entertainment, or many other applications.”

At the moment, the voltage required to power the skin is high. So, Shepherd says, his group is working on making it thinner so that they can use batteries to power it instead having to plug it in.

Share X
To send an e-mail to multiple recipients, separate e-mail addresses with a comma, semicolon, or both.
Title: Octopus inspires electroluminescent skin
Author: Bethany Halford
Chemical & Engineering News will not share your email address with any other person or company.