Companies tried to manage their way around a strong dollar, low prices, and wobbly demand in 2015

The U.S. chemical industry is struggling with challenges that started in earnest in the fourth quarter of 2014 and have continued unabated into 2016. They include the financial effects of the strong dollar, price pressures on commodities, and slow demand growth—particularly in China.

Company earnings reports for 2015 show that timely decision-making by executives made an impact: On average, earnings declined much less than sales. For the 18 firms tracked by C&EN, earnings shrank by almost 10% while sales dropped a precipitous 17%. In 2014, major cost-cutting programs helped the industry grow earnings by more than 8% on mostly flat sales. Those efforts continue, but now company leaders are out of easy options.

Dow Chemical and DuPont made the biggest strategic move of the group in the face of what looks to be a few more years of difficult economic weather. Their blockbuster merger, expected to be completed in the second half of this year, will set up the infrastructure for three specialized, streamlined businesses in agriculture, materials, and specialty chemicals.

Streamlining is a specialty at Dow. While sales in 2015 fell 16% compared with 2014, earnings for the year grew 9%, thanks both to divestitures of low-margin businesses and to a three-year, $1 billion cost-cutting program. The firm also benefited from strong demand for high-margin chemicals used in a range of consumer products including pharmaceuticals, cosmetics, automobiles, construction materials, and semiconductors.

Stock analyst concerns that low oil prices would be a drag on Dow’s bottom line did not come to pass. Although prices did decline for less specialized chemicals and plastics, Dow Chief Executive Officer Andrew N. Liveris credited cheap gasoline for putting more money in the pockets of consumers and, by extension, the firm’s customers.

Dow also sidestepped slowing growth in China. The nation’s strategic shift to manufacturing more of its own finished consumer goods pushed Dow’s sales volumes there up 10%. DuPont, on the other hand, saw full-year volumes sold in Asia-Pacific slide 2%. 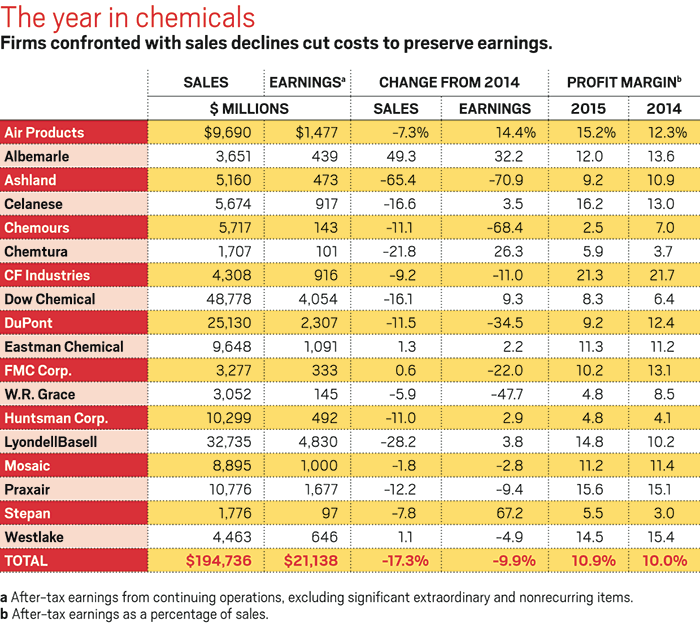 In addition to Dow, six other firms—notably Air Products & Chemicals, Chemtura, and LyondellBasell Industries—were able to produce higher earnings in 2015 even as sales dropped. These results contributed to a glass-half-full take on the otherwise dismal results: Average profit margin for the 18 firms expanded to 10.9% from 10.0% in 2014.

Industrial specialties maker Chemtura raised its profit margin to 5.9% from an anemic 3.7% in 2014. “Chief among our efforts in managing what we can control was our $62 million cost-reduction initiative,” explained the company’s CEO, Craig Rogerson.

That’s a huge number for a firm with earnings of $101 million. In contrast to strong demand for specialty chemicals used in consumer products, sales of lubricant additives and flame retardants for Chemtura weakened in 2015.

But Chemtura’s move in 2014 to sell its agrochemical business seems well-timed. In 2015, the agriculture segment brought pain to firms selling seeds and chemicals to farmers. In the U.S., low commodity prices pushed farm income down by more than 27% compared with 2014, according to the U.S. Department of Agriculture. With farmers putting the brakes on purchasing, inventories piled up. USDA forecasts incomes to shrink further in 2016.

At Dow, agriculture-related sales were off by 16% in the fourth quarter. The song was the same at crop chemical maker FMC Corp. “Market conditions throughout 2015 were some of the most difficult the company has faced,” said FMC CEO Pierre Brondeau. FMC saw overall earnings drop 22% to $333 million compared with 2014.

In Brazil, another big market for agriculture products, the strong dollar pummeled the local real and hit DuPont with a $139 million negative currency impact in the fourth quarter. That pushed the firm’s agriculture business to a quarterly loss.

For the year overall, DuPont saw earnings plunge 35% as healthy demand for food and personal care ingredients was countered by lower earnings from performance materials, safety and protection, and electronic chemicals.

It was another tale of woe at DuPont’s former performance chemicals business, Chemours. The company was spun off in July and almost immediately announced a $350 million cost-reduction plan.

Since then, it cut R&D spending, shuttered titanium dioxide capacity, and is looking for buyers for some of its smaller business. Chemours also inherited environmental liabilities from DuPont, including 3,500 court cases stemming from the release of perfluorooctanoic acid into drinking water in West Virginia and Ohio.

Chemours’s full-year results compared to 2014, when it was part of DuPont, were a sales decline of 11% and an earnings drop of 68%. Its fluoroproducts segment suffered from weak demand from consumer electronic and industrial customers, though the company did enjoy growth in demand for its Opteon refrigerants.

The bulk of Chemours’s sales and earnings decline came from lower prices for the white pigment titanium dioxide. The weak TiO2 market also hit profit margins at rival producers Tronox and Kronos. All three firms are on review for a credit downgrade by ratings agency Moody’s. Investors relaxed a little in late February when Chemours received a $190 million advance payment from DuPont for goods and services it will provide.

Investors will be watching to see whether owning spin-offs such as Chemours pays off as promised, compared with the alternative, wherein a company like DuPont would seek a buyer for a business that it no longer wants to manage. Although separating into two firms allows each management team to pursue a unique destiny, it also means two sets of leadership, administration, logistics, sales and marketing, information technology, and human resources.

The data won’t be in soon enough to stop the runaway train of spin-offs in the chemical industry. W.R. Grace already spun off its construction chemicals business, Air Products is planning to separate its chemicals business, and Ashland will make a separate company out of its long-beloved Valvoline motor oil and retail oil-change brand.

One company that did well in 2015 thanks to maintaining a bit of diversification was LyondellBasell, which produces olefins, polyolefins, intermediates, and derivatives. It even owns refineries. With oil prices dropping like a stone, Lyondell’s earnings were in danger of tanking. Indeed, the company did book a $284 million charge for inventory adjustment, but its earnings grew 3.8% for the year.

“We continue to prove that we are capable of delivering strong results under a wide range of market conditions,” said Bob Patel, Lyondell’s CEO.

Looking ahead, there are no signs that market conditions will improve, warns Laurence Alexander, a stock analyst at the investment bank Jefferies. “Expectations appear to have adjusted to a ‘more of the same, or worse,’ outlook,” he wrote in a note to investors.

Still, some economists are expecting a small improvement in growth in Europe and possibly even in China, Alexander reports. He expects price pressures on chemicals will linger. Currency effects won’t improve, though they may stabilize.

For better or worse, oil prices won’t recover anytime soon. Last month, investment bank Morgan Stanley downgraded its outlook for average oil prices to $30 per barrel in 2016 and $40 in 2017 as overproduction is expected to persist.

Dour news coverage of the economy may affect consumer spending, which could slow demand for certain specialty chemicals. In February, consumer confidence declined compared with January, according to the Conference Board, a business research association.

Also last month, the American Chemistry Council said its leading economic indicator, the Chemical Activity Barometer, slipped 0.1% after a flat January. Production-related indicators showed improvement for packaging resins but a downturn in performance chemicals for the oil and gas sector.

“Europe continues to gradually improve and expand manufacturing, while the U.S. will be challenged due to tepid global demand and a stronger dollar,” he said on a call with analysts. “China’s slowing and uncertainty remains a concern as we continue to see a shift from industrial production to services and consumer sectors. And in agriculture, the fundamentals remain challenging as net farm income continues to decline.”