[+]Enlarge
Credit: @erinleeryan/Twitter
The cake isn’t a lie: If you’re going to break embargo, be sure to bring enough cake to share. 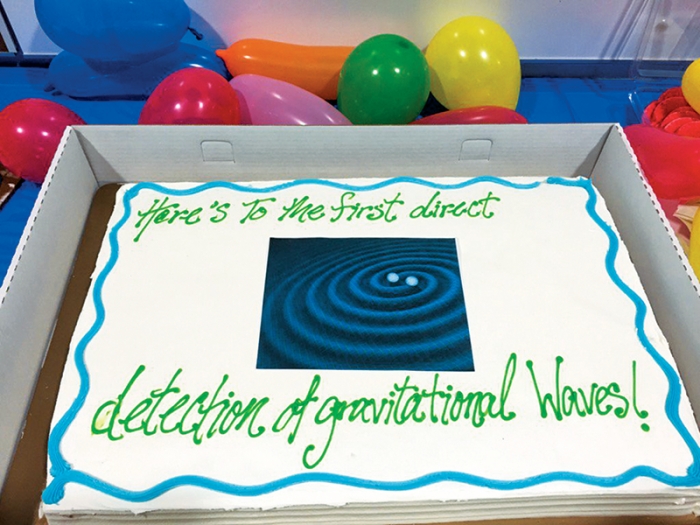 Credit: @erinleeryan/Twitter
The cake isn’t a lie: If you’re going to break embargo, be sure to bring enough cake to share.

On Feb. 11 at 10:14 AM, astrophysicist Erin Lee Ryan snapped a photo of a cake at the National Aeronautics & Space Administration’s Goddard Space Flight Center and shared it on Twitter. This tweet seemed harmless, especially because Ryan was encouraged to photograph the cake, she tells the Washington Post.

But written in the cake’s icing was a congratulatory message for researchers who had directly observed gravitational waves for the first time. These “ripples in the fabric of space-time” likely emanated from two merging black holes, according to the team that detected the arcane vibrations (Phys. Rev. Lett. 2016, DOI: 10.1103/physrevlett.116.061102). In announcing this achievement, however, Ryan’s cake photo also broke one of humanity’s most sacred pacts—the media embargo.

Only slightly less mystifying than gravitational waves, embargoes help journalists learn about scientific discoveries in private. Researchers, scientific journals, and reporters all keep mum on the news until an agreed-upon time, giving everyone an equal opportunity to break the story.

The gravitational waves embargo was set to expire 16 minutes after the cake posted to social media, but stories and rumors anticipating the announcement were circulating widely well before then. The tweet just gave weight to these suspicions ahead of schedule.

“It wasn’t the worst thing ever,” admits Goddard News Chief Edward S. Campion. But he stresses to Newscripts that NASA takes embargoes very seriously. “It would have been great if she had tweeted the picture 15 minutes later,” Campion says.

In her defense, Ryan—who also tweeted a picture of a cake announcing the discovery of propene molecules on Saturn’s moon Titan ahead of the embargo—tweeted that the embargo had to be broken before her tweet. Someone told the baker, after all.

For readers looking to satisfy their scientific sweet tooth with something more down to Earth, Leon Bellan of Vanderbilt University has just the thing: Capillaries made with the help of a cotton candy machine. 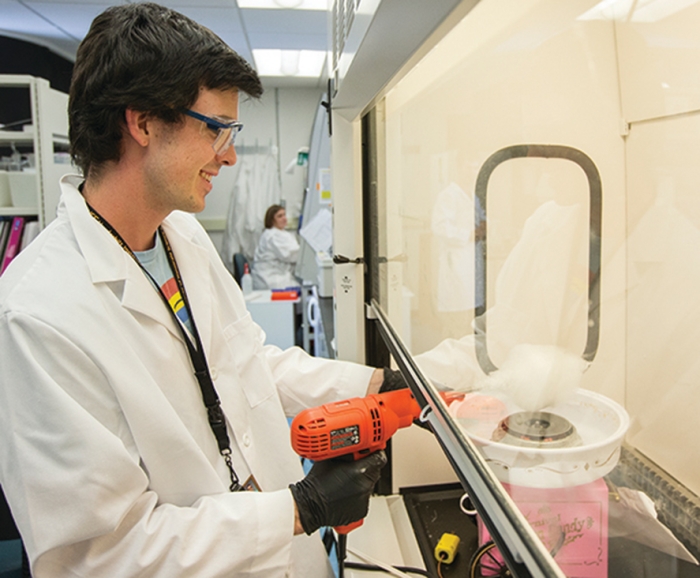 About five years ago, Bellan and his team used the sugary fibers spun by a cotton candy maker as templates to create microscopic channels inside polymers. They poured a liquid resin over the wispy candy, let the polymer solidify, and then dissolved the sugar with water to leave a network of narrow tubules resembling capillary blood vessels.

One of the biggest challenges confronting researchers trying to engineer biomaterials that behave like living tissue is creating complex microscopic vasculature that also mimics the real thing, Bellan tells Newscripts. Tissue engineers have turned to three-dimensional printers for help, but Bellan says his cotton-candy-spinning approach could be a simpler way to generate the tubules.

The catch is that biomaterials are necessarily wet, and Bellan’s group realized it wouldn’t get far using sugar templates that dissolve in water. So the researchers developed a new cotton-candy-inspired approach.

Conventional cotton candy machines spin fibers from molten sugar. Bellan’s team instead spins tufts of fibrous poly(N-isopropylacrylamide), or PNIPAM, from a liquid solvent. The team then coats those tufts with a warm serving of gelatin infused with living cells. The PNIPAM network maintains its integrity at elevated temperatures within this watery coating, but the network dissolves after the gelatin sets and cools toward room temperature, leaving behind capillaries (Adv. Healthcare Mater. 2016, DOI: 10.1002/adhm.201500792).

Bellan tells Newscripts the process isn’t fully optimized, but he believes it will be a welcome addition to the tissue engineering toolbox. And the work has also solidified his stance on a certain sweet treat. “The only cotton candy worth eating is maple cotton candy,” he says.

Biomaterials
Researchers turn organs into stretchy see-through material
Materials
Why whiskey doesn’t have a ring to it
Materials
Hydrogel Helps Soft Materials Keep Up In 3-D Printing Craze
Share X
To send an e-mail to multiple recipients, separate e-mail addresses with a comma, semicolon, or both.
Title: Sweet scientific surprises
Author: Matt Davenport
Chemical & Engineering News will not share your email address with any other person or company.