ISEF is the world’s largest precollege science competition. More than 1,700 high school students from more than 75 countries, regions, and territories competed for approximately $4 million in prizes. ISEF is organized by the Society for Science & the Public and jointly funded by Intel and the Intel Foundation. Additional awards are given by corporate, academic, governmental, and science-focused organizations, including the American Chemical Society.

In addition to the top prizes, awards were handed out in 22 subject categories, including chemistry, biochemistry, and chemical energy.

In the chemistry category, the $5,000 Best of Category Award went to Kathryn Anna Lawrence, 17, and Katherine Afton Younglove, 18, of Fairview High School, in Boulder, Colo., for their project titled “The Effect of Carbon on Iron Nickel Bimetallic Nanoparticle Degradation of Orange G.”

In the biochemistry category, the $5,000 Best of Category Award went to Edward Sangyoon Kim, 16, of Midway High School, in Waco, Texas, for his project titled “Highly Sensitive Single-Mutation Detection of EGFR by Bridged Nucleic Acid.”

In the chemical energy category, the $5,000 Best of Category Award went to Kathy Liu, 17, of West High School, in Salt Lake City, for her project titled “Nature-Based Solid Polymer Electrolytes for Improved Safety, Sustainability, and Efficiency in High-Performance Rechargeable Batteries.”

Howard Peters, who has been an ISEF judge in the chemistry category for the past 16 years, says that, if he could, he “would have awarded a master’s degree or Ph.D. to these students on the spot; they were that good. What impressed me was the [level of ingenuity] of the students. Many of them had talked their way into a local company or university to get access to the instruments that they needed.” 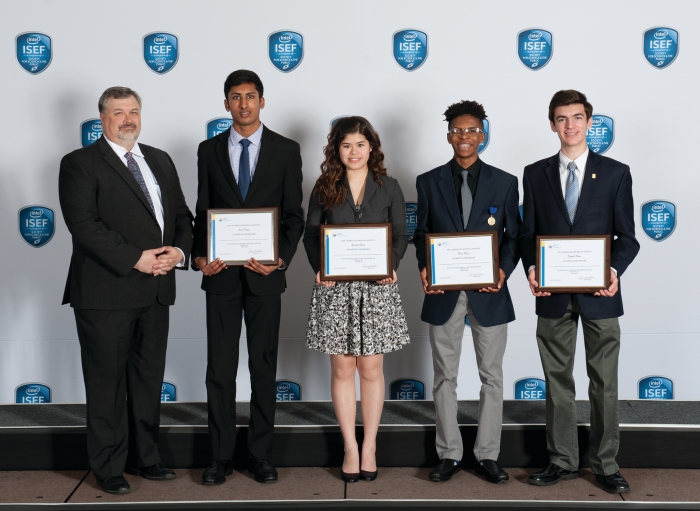 ACS also gave out $10,000 worth of prizes. Its top award of $4,000 went to Vineet Edupuganti, 16, of Oregon Episcopal School, in Portland, for his project titled “Fabrication, Characterization, and Modeling of a Biodegradable Battery for Transient Electronics.”

ACS’s $2,000 third-place award went to Samuel Allen Senegal II, 16, of Ovey Comeaux High School, in Lafayette, La., for his project titled “The Testing of the Mpemba Effect at Varying Salinities.”

“We were really interested in the ownership the students showed in their projects,” says Charley Langley, chair of the ACS Central Arizona Section, which coordinated and judged the ACS awards. The judges asked themselves, “ ‘Is this something where the student is asking the questions and they’re driving the work, or is this something where students were attached to a larger research group?’ We really wanted to look at those students where it was clear they were passionate about the research and really had ownership of it.”