Nanorods spit in the face of high humidity 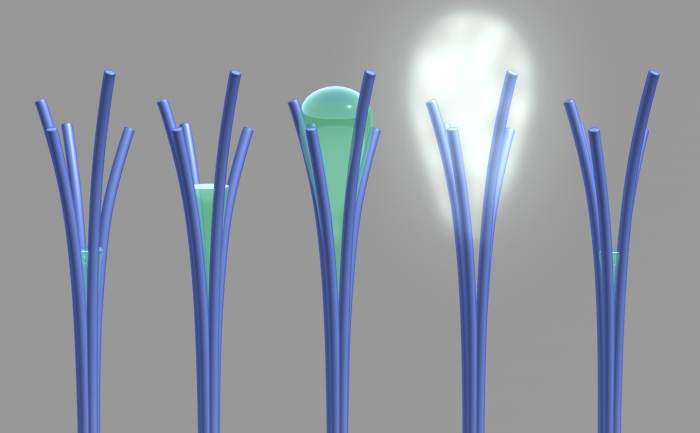 Credit: Nat. Nanotech.
In this artist’s rendering, a water droplet grows inside a nanorod bundle as humidity increases (left to right), until hydrophobic interactions vaporize it. Rods are tens of nanometers in diameter.

Forcing more water vapor into already damp air typically serves only to strengthen humidity’s soggy yoke. So when a newly synthesized nanomaterial recently liberated itself of moisture inside an increasingly muggy vapor absorption analyzer, Satish K. Nune and his colleagues were incredulous.

This discovery could lead to efficient, low-power devices that harvest water vapor from and relinquish it to a high-humidity reservoir, says team member David J. Heldebrant. Controlling the rod shape and geometry could also enable the team to collect other valuable liquids, such as methanol, Nune adds.

Watch the nanorods condense water into droplets (shown with red arrows) and then expel the water as humidity rises in this video captured by an electron microscope.
Credit: Nat. Nanotech./PNNL

To create the rods, the team added iron chloride to an ionic liquid made with carbon disulfide, 1-hexanol, and 1,8-diazabicycloundec-7-ene. A catalytic decomposition of the carbon disulfide likely produces the structures, which are made of carbon, iron, sulfur, oxygen, and nitrogen, says David Lao, who synthesized the material.

It remains a mystery as to how this process grows rods with the perfect chemistry and geometry to uniquely cope with humidity. The team, however, does have a theory for how the rods expel water at high humidity.

The rods form bundles that resemble sea anemones, explains Heldebrant. The bundles are tight at their root, but rods splay out like tentacles up top. As humidity increases, water starts condensing into a droplet where the splaying starts. The droplet grows as the humidity continues to rise and the droplet pulls the tentacles inward. Eventually, the carbon-based tentacles get too close to one another and hydrophobic interactions force the droplet to vaporize, the team postulates.

Pablo G. Debenedetti, a chemical engineer at Princeton University who was not involved with the study, calls the material intriguing. He adds that this discovery and theoretical backing could pave the way for other new materials to help manage water resources.