Protein cages made in the lab resemble protective virus constructs 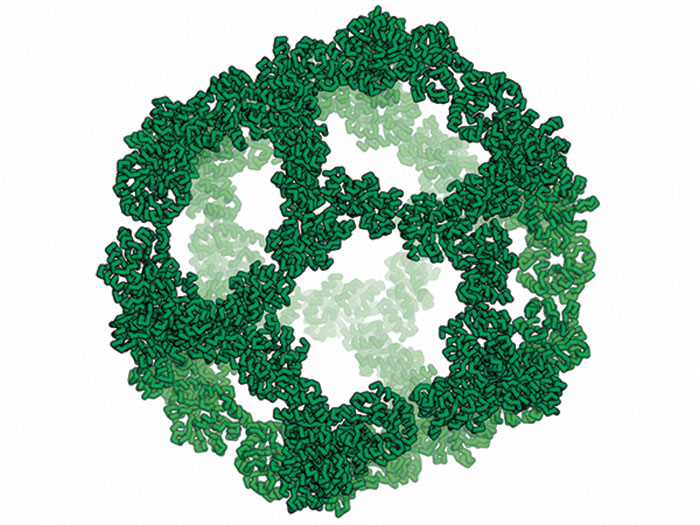 Viruses store their genetic material inside a protein shell, known as a capsid, which sometimes has an icosahedral shape. Now, in a development that could go viral, chemists have learned how to create protein icosahedra that look just like the ones some viruses use. Potential applications of such caged structures include packaging biomolecules, drugs, and vaccines and delivering displayed antigens capable of eliciting disease-fighting antibodies.

Yang Hsia and David Baker at the University of Washington Institute for Protein Design and coworkers developed the protein icosahedra by computational design (Nature 2016, DOI: 10.1038/nature18010). They used the group’s Rosetta software to design protein trimers that would assemble with one another to form a cage. On the basis of their new design, the researchers engineered bacteria to produce a modified aldolase that they found to work remarkably well; its trimeric version self-assembled into icosahedral particles nearly identical to the design model.

Researchers have designed tetrahedral and octahedral protein assemblies before, but those earlier nanocages “have limited use for packaging or delivery applications because they have little internal volume,” the researchers note. The icosahedra, however, have more generous interior space that can accommodate larger guest molecules.

With these spacious volumes in hand, Hsia, Baker, and coworkers then focused on interior design of their protein cages by creating additional icosahedra with potentially useful decorative add-ons. In one case, they engineered bacteria to express the aldolase with one or two copies of green fluorescent protein attached. That enzyme’s trimers formed icosahedra with 60 or 120 fluorescent groups inside. These fluorescent cages could be useful as reference standards for fluorescence intensity and as markers for light or electron microscopy of cell components, the team suggests.

The group also derivatized the aldolase with pentameric proteins. The pentamers take up residence in the large pores on each of the icosahedron’s 20 faces, where they modulate the ability of molecules to enter and exit the cage.

“The paper is a milestone in designed assembly,” says structural virologist John E. Johnson of Scripps Research Institute California. He notes that a useful future challenge for researchers would be to emulate a trick viruses have developed—the ability to unlock the capsid when its payload needs to be released.