Chemist by day, ninja in May

Credit: Courtesy of Janis Louie
Stairway to hell: Louie hangs from a “Ninja” obstacle known as the Devil Steps.

Many things about Janis Louie seem exceptional. She’s a synthetic chemist with a doctorate from Yale, a former UCLA cheerleader, and the mother of five-year-old triplets. To top it off, this May she competed in the Oklahoma City qualifying round for the popular television show “American Ninja Warrior.”

“Ninja,” as it is affectionately known, challenges competitors to tackle physical obstacles with names like Bridge of Blades and Snake Crossing that require extraordinary strength and endurance. Those familiar with the show know that Louie, a petite 44-year-old, doesn’t fit the mold: The competition is made up mostly of men in their mid-20s who approach 180 cm in height and weigh at least 70 kg. But this hasn’t deterred Louie, for whom the term “driven” may be an understatement.

When she’s not facing down the Warped Wall, Louie is a tenured organic chemistry professor at the University of Utah. And no, she doesn’t get tired of being asked how she juggles it all. She hopes her story will remind people that it’s never too late to pursue a goal, no matter how ambitious.

One way she lives up to this advice is by making the most of her time: “It’s really easy to say, ‘I only have 15 minutes and that’s not enough, so I won’t read this paper or play with my kids or work out.’ But if that’s all you have, then use it.”

Louie is not the only chemist to get in on the action. Zack Kemmerer, a second-year Ph.D. candidate in biochemistry at the University of Wisconsin, Madison, competed in the Indianapolis qualifying round that aired June 13under the nom de guerre “Science Ninja.” Kemmerer will advance to the regional finals. Louie’s qualifying round results will be revealed Monday, June 20, on NBC.

This competition will not be televised 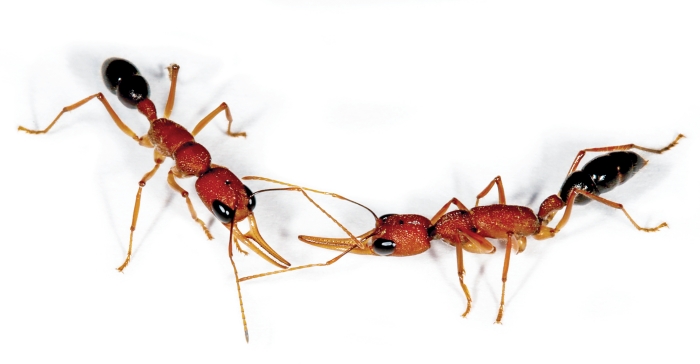 Credit: Juergen Liebig
Scent of superiority: Dueling ramps up dopamine production, which other ants can smell.

While Louie was scrambling up the Devil Steps, ambitious ants were aiming to rise a rung on the social ladder. A study by Takao Sasaki of the University of Oxford and colleagues details different types of interactions that occur among these insects (Am. Nat. 2016, DOI: 10.1086/686259). The behaviors allow the ants to achieve a complex social hierarchy, even though they lack sophisticated thought.

When the queen of an ant colony dies, other ants vie to take her place. Rather than perform feats of strength, ants use behaviors such as biting to show their superiority, which can translate to a shot at the throne.

Perhaps the most interesting mode of interaction is shared dominance, normally seen only in cognitively advanced animals such as primates and dolphins. In shared dominance, the positions of power are divvied up among a ruling class. These elites usually rely on facial recognition and long-term memory to pick each other out.

Lacking in smarts, ants rely on fertility signals such as dopamine levels and ovary size to figure out who’s in charge. A cornerstone of this system is antennal dueling, whereby one ant hits antennae with another of equal rank. Unlike pistol dueling, which can be deadly, this behavior leads to a mutual boost in sex appeal. Sasaki describes it as a ritual, almost like a fist bump.

Though there can be only one queen, the ruling class makes up 10 to 20% of the total population and helps keep the lesser ants in line.

To parse out the importance of antennal dueling to ant society, Sasaki’s group observed the ants’ behavior. The researchers then created a computer simulation that modeled the various types of interactions. Without antennal dueling, they found, the shared-dominance hierarchy disappeared.

“Our models show that you don’t need such sophisticated cognition to have a stable shared-dominance hierarchy,” Sasaki says.

Could this mean, then, that the social systems of more advanced animals could be less complex than previously thought? Sasaki says, “If we could show that, it would be very sexy, but I think we need more data.”

Chemical Communication
Decoding how insects use visual and chemical cues to find food
Education
Scientific studies of sports and spoilers
Biological Chemistry
How beetle moms tell mates to bug off
Share X
To send an e-mail to multiple recipients, separate e-mail addresses with a comma, semicolon, or both.
Title: Warrior chemists and wannabe queens
Author: Alexandra Taylor
Chemical & Engineering News will not share your email address with any other person or company.