Nuclear Chemistry: IUPAC gives its stamp of approval and will issue a new table

CORRECTION: On Jan. 7, 2016, this story was changed to correct the atomic number for livermorium and to clarify that IUPAC was the group that gave temporary names to the new elements.

With the addition of four new elements, the seventh row of the periodic table is officially full, the International Union of Pure & Applied Chemistry (IUPAC) announced on Dec. 30. 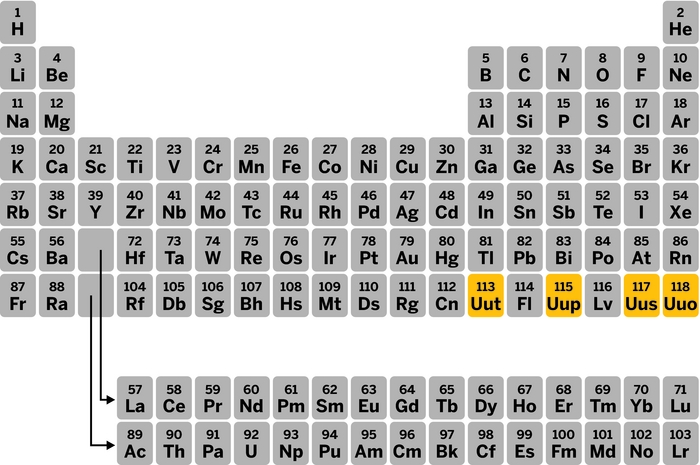 A joint committee made up of IUPAC and the International Union of Pure & Applied Physics gave its stamp of approval, and IUPAC temporarily gave element 113 the name ununtrium (Uut), 115 the name ununpentium (Uup), 117 the name ununseptium (Uus), and 118 the name ununoctium (Uuo).

The joint committee evaluated the experimental evidence for new element creation. The experiments generally involve smashing a beam of atoms of one element, such as calcium or zinc, into a target made of another material, such as berkelium or bismuth. Scientists then track the elements formed through their radioactive decay chains. “A particular difficulty in establishing these new elements is that they decay into hitherto unknown isotopes of slightly lighter elements that also need to be unequivocally identified,” said committee chair Paul J. Karol, a professor emeritus of chemistry at Carnegie Mellon University, in an IUPAC statement.

The people credited for first discovering an element get the right to propose a permanent name and symbol. For element 113, that honor goes to scientists at Japan’s RIKEN research institution. It will be the first time that Asian researchers name an element.

For the other three elements, credit and naming rights go to European-American collaborations involving Russia’s Joint Institute for Nuclear Research and the U.S. Lawrence Livermore and Oak Ridge national laboratories.

IUPAC plans to issue a new periodic table with the four added elements and other updates by the end of January, says Lynn M. Soby, IUPAC’s executive director. She hopes that the elements will receive their final names in about six months, at which point IUPAC will again update the table.

The previous two elements added to the periodic table were element 114, flerovium, and 116, livermorium. They were approved in 2011 and named in 2012. Research groups have tried to create elements 119 and 120, but so far no one has reported success.

What fascinates researchers about superheavy elements in the seventh row and beyond is their potential chemistry, says Dawn Shaughnessy, principal investigator for the heavy element group at Lawrence Livermore National Laboratory. As the number of protons in an atomic nucleus increases, electrons speed up and generate relativistic effects that alter orbital energy levels. That could mean that group reactivity trends don’t hold as elements get heavier.

But doing chemistry on short-lived atoms created one at a time in heavy-ion accelerators is challenging. “The periodic table says that 118 is a noble gas. How could we determine that based on a single atom?” Shaughnessy asks. “We’re going from bulk to atomistic properties, and it’s a totally different ballgame.”

Comments
K Chua (January 6, 2016 9:15 AM)
i bought a periodic table in 2014 and its seventh row was completed already... so when i read the news, i was confused because i thought those 4 elements weren't new at all... or was my periodic table wrong?
Reply »

Paul J. Karol (January 7, 2016 12:37 AM)
Claims for discovery of new elements get lots of press and show up in the periodic table because such discoveries are always exciting news, as they should be. But they are not official until scrutinized according to established criteria for discovery. Element 110 was announced decades ago, for example, but the claim did not survive review nor attempts to confirm. In a similar vein, there have been claims of a long-lived isotope of element 122 which have been resoundingly rejected as poor science.
Reply »

Paul J. Karol (January 7, 2016 12:40 AM)
Element 113 has been synthesized by a large group of collaborators (a couple of dozen) at RIKEN in Japan. Elements 115, 117 and 118 have been produced by collaborations among several dozen scientists at Dubna (Russia), Lawrence Livermore (US) and Oak Ridge (US) laboratories.
Reply »

Paul J. Karol (January 6, 2016 4:00 PM)
Element livermorium has Z = 116, not 115. Furthermore, the IUPAC/IUPAP committee did NOT use the names ununtrium, ununpentium etc for the new elements. In fact, like the vast majority of nuclear scientists in the know, we are strongly opposed to what is an IUPAC scheme for devising temporary "names" and this has been made clear several times to IUPAC.
Reply »