Bubbles could be a targeted remedy for ocean acidification 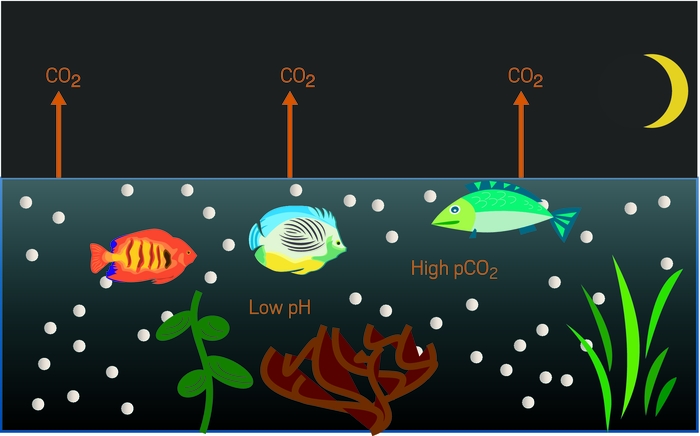 Corals, shellfish, and other marine creatures made of calcium carbonate are threatened by ocean acidification, a consequence of rising atmospheric carbon dioxide levels increasing dissolved CO2 in the ocean. A new study suggests that bubbling compressed air into seawater to lower its CO2 concentration could help vulnerable coastal ecosystems cope with these changes (Environ. Sci. Technol. 2016, DOI: 10.1021/acs.est.5b04733). But because the process consumes substantial energy, researchers say it would be worthwhile only for small, particularly prized areas at high risk for damage from acidification.

Like other proposed geoengineering schemes, the approach is being developed as a way to mitigate the harmful effects of CO2 emissions. For it to work, the concentration of CO2 dissolved in the water must be substantially greater than that of the air being bubbled through—which has the same composition as the atmosphere. Unlike the open ocean, shallow coastal ecosystems tend to meet this requirement because the abundant life there releases lots of CO2 through respiration. The CO2 load becomes greater at night, when aquatic plants in reefs and coastal habitats stop photosynthesizing but continue respiring. Ocean acidification and nutrient pollution can push these CO2 levels even higher.

David A. Koweek, an earth system science graduate student at Stanford University, thought that artificially increasing the generally slow gas exchange rate between the ocean and the atmosphere would help the abundant CO2 dissolved in seawater to escape. Oxygen is sometimes bubbled through freshwater lakes to remediate nutrient pollution, so Koweek proposed a similar setup: releasing bubbles of compressed air at the seafloor to help strip CO2 out of the water. As the bubbles rise through the water column, they pick up CO2 and then degas into the atmosphere at the surface.

Using a mass transfer model of bubble dynamics, Koweek and his colleagues predicted that using this approach in coastal areas 1–3 m deep would enhance gas exchange rates by one to two orders of magnitude. That would lower CO2 concentrations in the water by 22% from their simulated nighttime peak within two hours. Then they tested the approach in a seawater tank containing giant kelp at Stanford University’s Hopkins Marine Station. They left the kelp overnight, allowing CO2 to increase in the tank due to respiration. Early the next morning, they removed the kelp and bubbled air through the water for four hours. The change in dissolved CO2 closely matched the model predictions.

“I think of this as a strategic intervention,” Koweek notes, because the CO2 isn’t captured and removed from the atmosphere, and a lot of energy to operate the bubblers is required. But it could protect particularly important areas of coral reefs, favorite snorkeling sites, culturally significant areas, or areas valuable for aquaculture like an oyster farm.

Ken Caldeira, an ocean acidification expert at the Carnegie Institution for Science, says the work is technically sound and may be useful for restoring small coastal areas such as semi-enclosed bays, coral atolls, or limited parts of a coral reef, “but it is probably not feasible to scale it up, say, to the scale of the entire Great Barrier Reef, no less the global ocean.” Using renewable sources such as waves, tides, or solar power might make it more practical, he says.

He adds that the work may see its first application in scientific studies. “Koweek has given us a way to bring seawater chemistry back to what it was like a few hundred years ago,” Caldeira says. “This geochemical time machine could be of great use in scientific exploration of how ecosystems respond to changes in ocean chemistry.”

Pollution
Satellites can now see air pollution inequality within cities
Persistent Pollutants
Goodbye to some PFAS in food packaging
Pollution
Mercury makes it deep into marine trenches
Share X
To send an e-mail to multiple recipients, separate e-mail addresses with a comma, semicolon, or both.
Title: Bubbles could be a targeted remedy for ocean acidification
Author: Deirdre Lockwood
Chemical & Engineering News will not share your email address with any other person or company.

Comments
Jerry Kit (April 6, 2016 2:03 PM)
would wind powered aerators, typically used to aerate ponds, not be able to supply a sufficient amount of air into the sea water to purge CO2?
Reply »