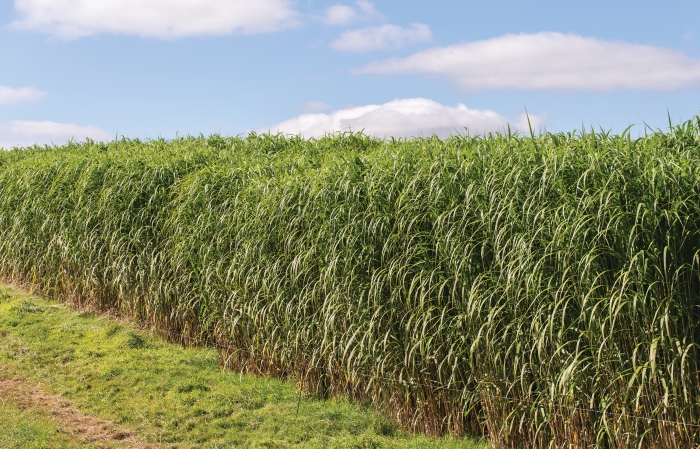 Credit: Sponner/Shutterstock
Using an inexpensive nickel catalyst, researchers converted the tough lignin from the grass Miscanthus (shown) into phenolic compounds that could be used in flavor or fragrance chemistry.

Fast-growing grasses and trees such as switchgrass and poplar offer a sustainable alternative to petroleum as a source of fuels and chemicals. But to make fuels from plant sugars in cellulose and hemicellulose, producers generally have to remove the surrounding lignin, a hardy phenolic polymer that helps support the plants’ structure. Instead of wasting this abundant resource, scientists have been seeking ways to make useful chemicals from it. Now a new study shows that an inexpensive nickel-based catalyst can transform 68% of lignin from the grass Miscanthus, or elephant grass, into valuable aromatic compounds, while preserving plant sugars for subsequent conversion to fuel (ACS Sustainable Chem. Eng. 2016, DOI: 10.1021/acssuschemeng.5b01776).

Converting lignin to useful chemicals is challenging because the polymer is highly heterogeneous and recalcitrant to degradation. Recently, however, scientists have found that some precious metals can catalyze the breakdown of lignin into valuable aromatic monomers used in flavor and fragrance chemistry. Mahdi M. Abu-Omar of Purdue University and his colleagues used a palladium-zinc catalyst to convert 50% of lignin in poplar into two phenolic products (Green Chem. 2015, DOI: 10.1039/C4GC01911C). In 2014, Abu-Omar founded the company Spero Energy to develop the group’s technology. But to make the process less expensive and more environmentally friendly, they sought a cheaper, more earth-abundant catalyst. Nickel, just above palladium on the periodic table, was the obvious choice.

In the current study, the researchers adapted their previous method to use a nickel catalyst supported with activated carbon. In a reactor, they combined 1 g of milled Miscanthus with 45 ml methanol, and introduced the catalyst in a microporous stainless steel cage to prevent solid reaction products from recombining with the catalyst. Under high pressure, they heated the reactor to 225 °C, which breaks the lignin polymer into shorter, soluble units that contact the catalyst through the cage. The nickel catalyst then helps deoxygenate these oligomers into aromatic products.

Using this method, the team turned 68% of the lignin from Miscanthus into phenolic products, including dihydroeugenol, propylsyringol, and ferulic acid methyl esters, which can be used to make vanillin. The reaction also left behind a solid, carbohydrate residue, the researchers found. With an iron chloride catalyst, the team then converted this to furfural and levulinic acid with up to 86% yield. These products can be used to make biofuels or other chemicals.

R. Tom Baker, a catalysis researcher at the University of Ottawa, calls the study a “landmark paper,” noting that a simple two-step process converts more than half the mass of the grass feedstock into value-added chemicals. “Although the biobased chemicals industry is currently facing major economic challenges from unreasonably inexpensive petroleum,” he says, “this exciting work shows that technical advances towards viable biorefineries are well underway.”

Comments
Chris Harrison (March 10, 2016 8:05 AM)
This is indeed a "Landmark Paper" and bodes well for the foray into alternative energy and chemical resource development. That said, Baker's characterization of current petroleum prices as "unreasonably inexpensive" sounds more like a complaint better left to economic experts, "major economic challenges" to the bio-based chemicals industry notwithstanding. This unnecessary comment clearly supports the concept of artificially inflating the price of one commodity to prop up a competitive market. This is dangerously akin to the USA's decision to provide subsidies to big-agro through, amongst other means, gasoline ethanol requirements.
Reply »

Kapil S Lokare (March 27, 2016 9:29 AM)
Dear Roberto,
If I am not mistaken one the first papers that highlighted the use of Ni-chemistry was John Hartwig in a 2011 Science paper in cleaving the Ar-O-R linkages.
Cheers!
Kapil
Reply »