Future displays that glow like fireflies could use less energy

An organic light-emitting diode that mimics the three-layered structure of a firefly’s lantern shines brighter than previous designs (Nano Lett. 2016, DOI: 10.1021/acs.nanolett.5b05183). The bioinspired OLED could be used to make TVs and computer screens that use less energy.

Jeong wanted to build a better firefly-based system, this time integrating the insect-inspired optics into the design of an organic LED. Jeong sought a flat design that could be used in TV and cellphone displays. For this work, Jeong turned to a species of firefly, Pyrocoelia rufa, that has structures 10 µm wide inclined at an angle of 5 °covering the cuticle like roofing tiles. The lantern is further decorated with thin ridges running lengthwise, 150 nm wide and 250 nm apart. Below the cuticle is a layer of tissue that produces light and sends it in all directions, while below that is a layer that acts as a mirror, reflecting the light upward and out of the lantern. 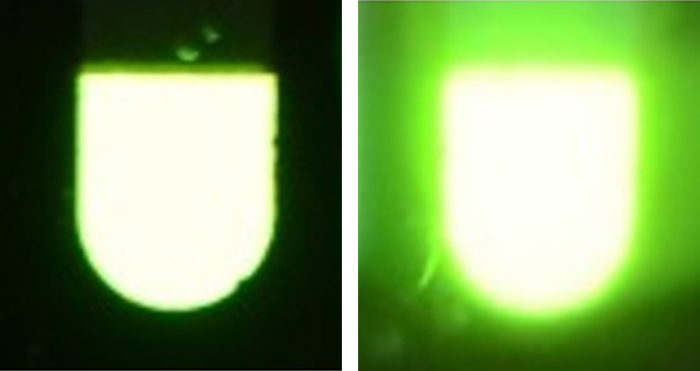 Credit: Nano Lett.
A green organic LED with a coating that mimics the surface of a firefly lantern shines 60% brighter than a standard green LED.

Jeong and his group mimicked these three layers in a design for a green OLED. The top layer is a polymer resin patterned with structures of the same dimensions as those that cover the cuticle. Below that lies a layer of the light-emitting material used in standard OLEDs, and under that, an aluminum reflector backs the OLED.

The bioinspired OLED shines about 60% brighter for the same amount of power compared to a conventional green OLED, Jeong says. And it emits the light over a broader angle, which could improve OLED TVs, giving them a larger viewing angle. So far Jeong’s team has made firefly-inspired OLEDs that emit green light at the same wavelength as the insects’ luminescence. To make a full display they’d need to tailor the pattern dimensions to work with red and blue pixels.

Akhlesh Lakhtakia, who develops biomimetic optics at the Pennsylvania State University, says it should be possible to make the bioinspired OLEDs at industrial scale for use in lighting and displays. But engineers now have to figure out whether the payoff in efficiency with a biomimetic design is worth the extra expense of redesigning how they make TV screens and light bulbs.

K.V. Venkatachalam (April 20, 2016 3:37 PM)
Mother Nature has perfected many of the physical, chemical and biological principles that can be of use for human utility. Enzyme catalyzed, perfected, reactions is something that we are very familiar. In light of human benefits this biological structure/function is certainly a novel and powerful addition.
Reply »

Robert Buntrock (April 22, 2016 10:40 AM)
There are several species of fireflies. Having grown up in Minnesota and lived in suburban Chicago for several years I noted that the MN fireflies had a "fuzzy" surface of the lantern whereas the IL fireflies (and those here in Maine) have a smooth surface. I don't know if any studies have been made on relative intensities of light emitted or differing cellular surfaces of the two (or more) species.
Reply »