Gecko-inspired adhesives get stretchy and conductive

A soft, sticky patch that conforms to skin could lead to better heart monitor electrodes and find use in tattoolike sensors 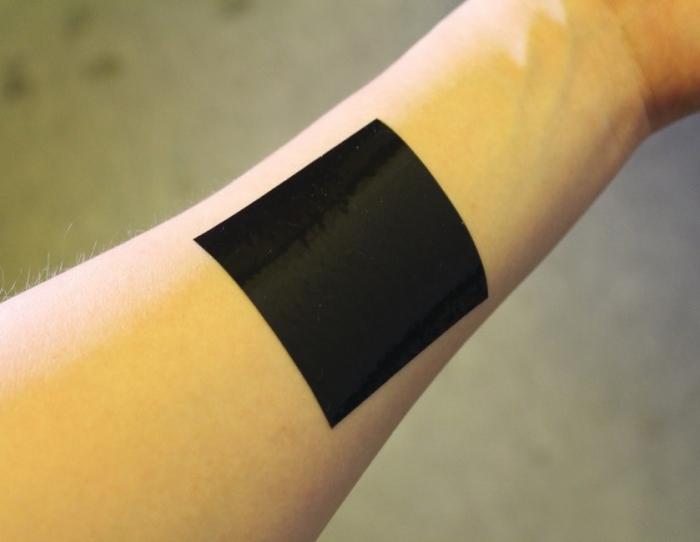 Credit: ACS Nano
A conductive, stretchable adhesive material based on gecko foot hairs could find its way into electrodes for heart monitors or in wearable electronics.

A new take on adhesives inspired by sticky gecko feet has led to soft, stretchy silicone patches that conduct electricity and cling fast to skin, even when underwater (ACS Nano 2016, DOI: 10.1021/acsnano.6b01355). The material could be used as comfortable, low-cost, reusable electrocardiography (ECG) electrodes for heart monitoring. Today’s disposable silver-based ECG electrodes have rigid metal parts and use glues that can irritate the skin. They can come off when wet or from too much movement, limiting a user’s ability to shower or exercise during longer periods of monitoring.

The new material could also be “crucially important in next-generation skinlike technologies for wearable electronics,” says John A. Rogers, a materials science professor at the University of Illinois, Urbana-Champaign, who was not involved in the work. Rogers and others are developing conformable tattoolike sensors to monitor fitness and various health conditions. The new material could make such devices more durable while doubling as an electrode.

Gecko feet are covered with microscopic, spatula-shaped hairlike features that allow them to run up walls and across ceilings. Researchers have previously mimicked these features by creating materials with flat-topped microscopic pillars that cling to surfaces via van der Waals interactions.

A team led by materials scientist Seokwoo Jeon at the Korea Advanced Institute of Science and Technology (KAIST) wanted to give these dry adhesives additional useful properties. They mixed a small amount (1% by weight) of conductive carbon nanotubes and graphene nanopowder into polydimethylsiloxane and poured the composite into a silicon mold dotted with holes. After curing the elastomer at 120 °C for two hours, they had a 4- by 4-inch square patch covered with golf-tee-shaped pillars. 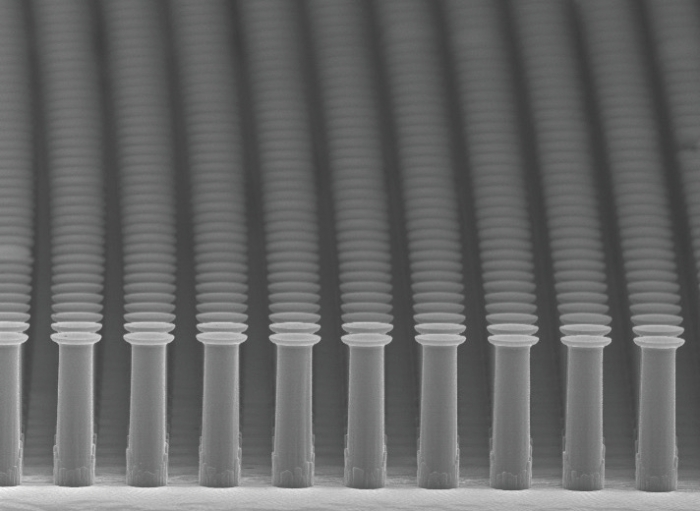 The researchers played with different pillar heights to maximize the material’s stickiness and strength. The ideal height, they found, was 15 µm. At this pillar height, the patch could be stuck and detached from skin 30 times without any change in performance, after which some of the pillars collapsed, reducing the patch’s stickiness.

A light-emitting diode connected to a patch stayed lit even when the patch was stretched by up to a third of its length. When a volunteer wore the patch wired to an ECG recorder, it gave heartbeat wave signals that matched those from a commercial electrode. And when the arm was submerged in water, the commercial electrode came off within five seconds, whereas the new patch continued to read signals, albeit with a slightly reduced strength. The researchers measured signals for about 80 seconds, and claim that the electrodes should be able to work underwater for much longer, as long as they are attached well.

Ronald S. Fearing, an electrical engineering and computer science professor at the University of California, Berkeley, says that such low-cost, nontoxic, skin-compatible electrodes may “find applications in interfaces for prosthetic devices, or perhaps even for monitoring muscle performance while exercising.” And unlike present-day ECG electrodes, he says, “long-term wear could be an option.”

The KAIST team hopes to create other gecko adhesive variations by adding materials other than carbon. “For example, fillers with functionalities such as thermal conductivity, magnetism, and luminosity are excellent candidates for realizing different types of multifunctional, self-adhesive platforms,” Jeon says.

Comments
Neil Farbstein (April 6, 2016 10:52 AM)
Recently, the Scientific World has seen a number of articles published about a brand new type of adhesive made from carbon nanotubes. It mimics the adhesive found on gecko feet. That lizard is able to climb on walls and ceilings up tree trunks etc. by means of the sticky hairs on its' feet.


Vulvox discovered the adhesive properties of the nanotube material serendipitously. We will work on developing composites that maintain those sticky properties on their surface. And there are indications that the adhesion might be increased in magnitude through a number of manipulations. The material conducts electricity as well as sticking to oral and vaginal mucus membranes. It can be sterilized and reused repeatedly.
Info about the material is given at http://vulvox.tripod.com/id14.html

Stacy Leroy Daniels (April 7, 2016 1:38 PM)
Jelly-fish extract for memory enhancement. Gecko adhesives for heart monitors. What's next? A combination of the two for politicians having no direct connection between heart and brain? Behold the $100 million bionic politician!