This story was updated on May 31, 2016, to correct Michael H. Tunick’s affiliation.

A generous dusting of grated parmesan perfects a plate of spaghetti. But how can the culinary connoisseur be sure that it really is the king of cheeses, Parmigiano Reggiano? Looks like a job for the cheese detectives. 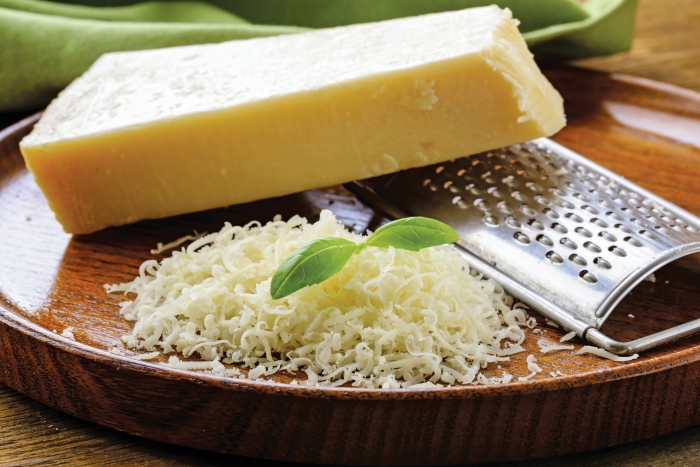 Credit: Shutterstock
Perfect with pasta, but is it the real Reggiano?

A team led by Augusta Caligiani and Gerardo Palla of the University of Parma has developed a method that can help to identify if parmesan has been bulked out with less noble cheeses—or whether it is an outright imposter (J. Agric. Food Chem. 2016, DOI:10.1021/acs.jafc.6b00913).

In the European Union, “Parmigiano Reggiano” and “parmesan” are both geographical indications: Their very names prove that the cheese was made in one of a handful of Italian provinces, using unpasteurized milk from local cows. And according to rules laid down by Italy’s Parmigiano-Reggiano Cheese Consortium, those cows must never be fed on a fermented fodder called silage because it can sometimes contain Clostridium bacteria. The bacteria aren’t pathogens but can produce gas in cheese during the ripening stage, causing defects, Caligiani says.

The Parma team had previously found that milk and cheese from silage-fed cows contained traces of two unusual cyclopropane fatty acids (CPFAs), possibly made by lactic-acid-producing bacteria in the silage (J. Agric. Food Chem. 2014, DOI: 10.1021/jf4057204). Now they have used gas chromatography/mass spectrometry to look for these molecules in 304 cheese samples. Those that forbid silage-feeding—including Parmigiano Reggiano, Fontina and Gruyère—had no CPFAs, confirming their authenticity. But Grana Padano, a hard cheese that does use milk from silage-fed cows, contained 300–830 mg of tell-tale CPFAs per kg of fat. “It looks like a legitimate method,” says Michael H. Tunick, a research chemist in the U.S. Department of Agriculture’s Dairy & Functional Foods Research unit.

Researchers already use other analytical methods to test the authenticity of parmesan: looking for either traces of copper from traditional processing vats or amino acids which indicate that the cheese was aged for more than a year. “But there was no analytical method able to identify the first stage of production of Parmigiano Reggiano: the feeding of the cows,” Caligiani says.

Grated parmesan is particularly vulnerable to being adulterated with other cheeses, and this method could detect counterfeits that included 10-20% of cheaper Grana Padano. Cheese malefactors are unlikely to adulterate below those levels, Caligiani says, because it would offer no economic advantage.

But the test will also help to police the parmesan brand, proving that the cheese was made according to traditional methods. “It could help to strengthen the confidence of consumers that what they’re buying is really Parmigiano Reggiano,” Caligiani says.

Such authenticity testing has broader implications for global commerce because the U.S. and the EU have different labeling regulations for cheese. Although U.S. cheesemakers can sell their “parmesan” in the domestic market, they are barred from using that name in the EU. Indeed, geographical indications have become a serious stumbling block in negotiations about the Transatlantic Trade and Investment Partnership, a treaty that aims to harmonize regulations in order to ease trade. European cheesemakers insist that their U.S. counterparts should not be allowed to continue using geographical indications such as “parmesan” on their products, even within the U.S., and in principle, authentication tests could help to enforce such rules.

“The U.S. dairy industry is dead set against that,” says Bill Watson, a trade policy analyst at the Cato Institute. “Their view is that it’s protectionist.”

Comments
Chad Brick (May 27, 2016 3:37 AM)
It is not “protectionist” to ban US companies from pretending to sell products prepared in specific geographic regions via specific processes. Yet the US is almost unique in allowing them to do so, with weak or non-existent protections of foreign geographical trademarks.
For example, have you ever had “Kobe Beef” in the US? Almost certainly not. You were lied to. Barring a few ultra-high-end restaurants in just the last few years, what you in fact ate was a half-breed raised in the US under no particular rules, not beef raised in Hyogo prefecture, Japan under very strict rules, genealogy, documentation, and traceability. And trust me, if you have ever eaten the latter, it ain’t the former.

You’d think someone from Cato would be a little less keen on defending corporate rip-offs and deception, but well, it’s Cato and they defend even the worst corporate behavior.
Reply »