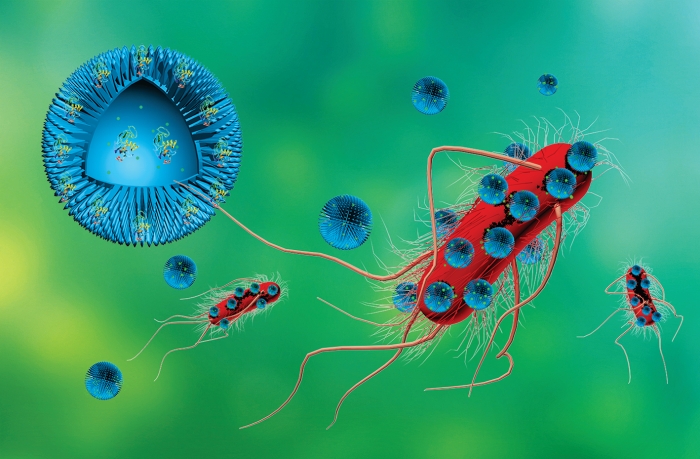 Scientists are searching far and wide for tools to fight bacterial infection in the face of increasing levels of antibacterial resistance. Recent studies have tried to harness lysozyme, a naturally occurring protein that attacks bacterial cell walls, as an antimicrobial agent. But its activity is too low to breach the less permeable external membrane of gram-negative bacteria such as Escherichia coli and kill them.

Now, researchers have developed supersticky nanoparticles that can deliver lysozyme directly to bacteria, boosting the protein’s antibacterial potency (J. Am. Chem. Soc. 2016, DOI: 10.1021/jacs.6b00243). The nanoparticles mimic the spiky shape of pollen grains, which adhere onto insect legs by virtue of their rough outer surface, says Chengzhong Yu of the University of Queensland.

Nanoscience researchers have begun to explore the role that the surface morphology of porous nanoparticles plays in the ability to deliver drug molecules to cells, and most efforts to create such particles use surfactants to guide their growth. However, surfactants are costly on a large scale and provide limited options in terms of shapes, Yu says. He and his colleagues designed a surfactant-free, one-pot technique for making nanopollen particles from silica, a material designated as safe to eat by the Food & Drug Administration.

To manufacture the silica nanopollens, the researchers first created a polymer core and then deposited a layer of silica mixed with the same polymer on top of it. Then the polymer was burned out at high temperature, leaving a hollow silica particle with a spiky surface texture. Mixing the positively charged lysozyme with the negatively charged particles loaded the protein onto the particles via electrostatic interaction.

[+]Enlarge
Credit: J. Am. Chem. Soc.
Round silica nanoparticles adhere to the surface of a rod-shaped Escherichia coli cell. 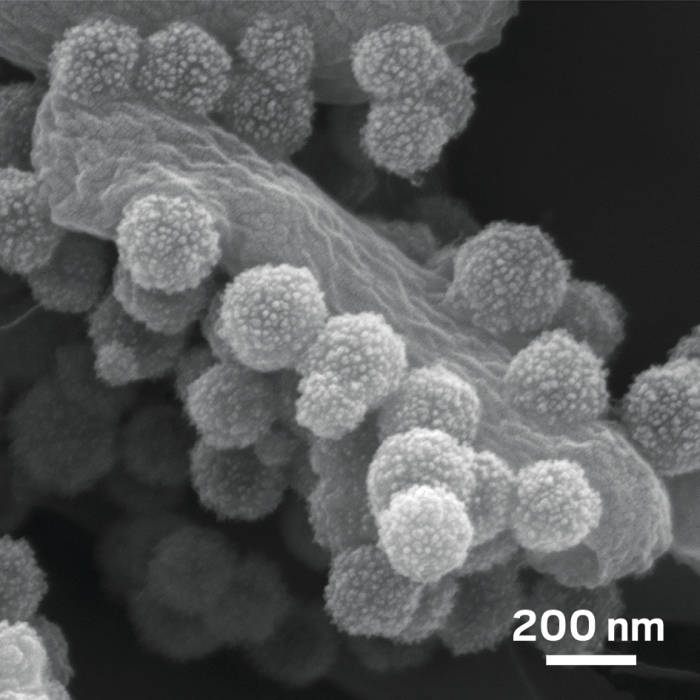 Credit: J. Am. Chem. Soc.
Round silica nanoparticles adhere to the surface of a rod-shaped Escherichia coli cell.

Then the researchers tested the stickiness and killing power of these nanopollens. When incubated with E. coli, almost 10 times as many nanopollen particles adhered to the bacteria as smooth silica nanoparticles. At a lysozyme concentration of 700 μg/mL, nanopollen particles completely inhibited bacterial activity for three days in culture, whereas smooth particles or free-floating lysozyme failed to fully inhibit bacterial growth. In segments of rat small intestine, lysozyme-containing nanopollens reduced the E. coli count by more than 97% compared with smooth particles, and by 99% compared with free-floating lysozyme.

Using rough outer texture to create a particle that is supersticky toward E. coli is “a very unique and interesting idea,” says Thomas J. Webster, a chemical engineer at Northeastern University. However, he says that in his experience, the FDA generally seeks a 99.99 to 99.999% reduction in bacterial numbers for antimicrobial agents, so the nanopollen-carried lysozyme may not be sufficiently potent. Also, particles this size—almost 400 nm in diameter—would likely be recognized and cleared by the immune system. Still, the study is promising, he says. “They’re looking at a property that we’re only beginning to understand.”

Yu agrees that immune clearance would be a problem if particles were injected into the bloodstream, but not if delivered orally. His team plans to use the lysozyme-filled particles to create antibiotic-free animal feed to combat the problem of antibiotic overuse in factory farming. Because lysozyme is a natural enzyme secreted in tears, saliva, and stomach mucus, it is stable under the acidic conditions in the stomach. The group has patented the approach and will soon test their lysozyme-nanopollen formulation in live chickens to see if it helps the birds grow faster. Yu says that the nanopollens could also have many other applications, such as delivery vehicles for pesticides applied to plants or animal fur.