PCBs and other organic pollutants reach the deep ocean

Persistent organic pollutants extend 2,500 m deep in the Atlantic Ocean, but at concentrations not acutely toxic to deep-sea organisms

[+]Enlarge
Credit: Thomas Soltwedel
Oceanographers lower a polyethylene sampler (enclosed in metal cage) attached to a mooring (orange) into the waters of the north Atlantic. With the samplers, the scientists have confirmed that persistent organic pollutants contaminate the deep ocean. 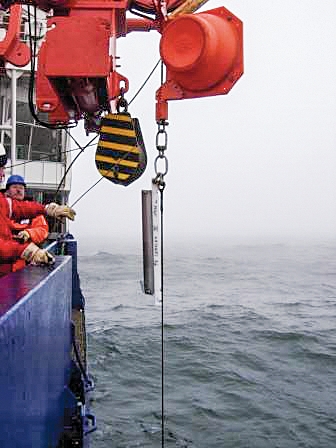 Credit: Thomas Soltwedel
Oceanographers lower a polyethylene sampler (enclosed in metal cage) attached to a mooring (orange) into the waters of the north Atlantic. With the samplers, the scientists have confirmed that persistent organic pollutants contaminate the deep ocean.

Ocean pollution isn’t just a plastic problem. An alphabet soup of persistent organic pollutants—including polychlorinated biphenyls (PCBs), polybrominated diphenyl ethers (PBDEs) used as flame retardants, and more—are carried by the wind and rivers into the ocean. A new study bolsters findings from scant prior sampling showing that these compounds have penetrated deeper than 2,000 m below the surface (Environ. Sci. Technol. 2016, DOI: 10.1021/acs.est.5b05891).

To gauge the impact of these pollutants on marine life, oceanographers want to know their abundance, how widely they are distributed, and how they get there. But it’s a challenge to measure them at sea because the pollutants have relatively low concentrations, demanding careful sampling techniques and precautions to avoid contamination. The research cruises required to take these open ocean samples are also very expensive. Until now, there have been only three studies of persistent organic pollutants in the deep ocean, at just a few different sites. Given how big the ocean is, there’s a lot of missing information, says Rainer Lohmann of the University of Rhode Island.

To help fill in the gaps, Lohmann and his colleagues deployed samplers at various depths from the surface to 2,500 m to measure organic pollutants dissolved in the water. Unlike those stuck to particles in the water column, dissolved pollutants are readily available to organisms. The team sampled at two mooring sites, one in the north Atlantic and the other in the middle of the tropical Atlantic. The samplers contained polyethylene films of various thicknesses that sorbed dissolved contaminants. After a year, the researchers collected the films, extracted the compounds, and analyzed them for 78 pollutants, including PCBs, PBDEs, organochloride pesticides, and polycyclic aromatic hydrocarbons, using gas chromatography-mass spectrometry. Using each compound’s concentration on the sampling film and the film thickness, the researchers could calculate its concentration in the water.

Most of the pollutant concentrations at the surface ranged from 0 to 50 pg/L, and matched findings from previous studies fairly well. Results for deeper samples were more surprising. A previous study from the 1980s in the north Atlantic showed that PCB concentrations declined with depth. In contrast, Lohmann and his colleagues found that PCBs at their two sites were most abundant at depths of 500 to 800 m—though still in the pg/L range—and then declined to concentrations similar to those at the surface in deeper water. PCBs were banned in many parts of the world in the late 1970s and early 1980s. Based on the composition of chlorofluorocarbons in the water, which indicates when water masses were last at the surface, the researchers found that the samples from the tropical Atlantic with maximum PCB concentration were at the surface in the 1970s, at the peak of PCB production. With this and other evidence, the researchers suggest that ocean currents that carry water from the surface to the deep ocean may be the main way the pollutants reach these depths.

The deep ocean is “clearly not highly polluted” with these compounds, Lohmann says, but they are surprisingly prevalent “for what we thought of as being a fairly pristine body of water.”

In contrast to the results for PCBs, the team found that more recently produced PBDEs were more abundant at the surface and declined with depth. This suggests that these compounds are just beginning to penetrate the ocean.

Anna Sobek, a marine chemist at Stockholm University who also studies persistent organic pollutants in the deep ocean, calls the study impressive. The levels the team detected are not high enough to cause acute toxic effects on marine organisms, she says. But because marine life is simultaneously exposed to many chemicals, even at low levels, “this could still be problematic,” she says.

Pollution
Satellites can now see air pollution inequality within cities
Persistent Pollutants
Goodbye to some PFAS in food packaging
Pollution
Mercury makes it deep into marine trenches
Share X
To send an e-mail to multiple recipients, separate e-mail addresses with a comma, semicolon, or both.
Title: PCBs and other organic pollutants reach the deep ocean
Author: Deirdre Lockwood
Chemical & Engineering News will not share your email address with any other person or company.

Comments
D.Jency (June 22, 2016 2:14 AM)
Persistent organic pollutants (POPs) are a class of highly hazardous chemical pollutants that are recognized as a serious, global threat to human health and to ecosystems. Some examples of POPs are DDT, PCBs and dioxin. POPs are widely present in the environment in all regions of the world. Every person carries a body burden of POPs, mainly in his or her fatty tissues and they have half-life in soil, sediment, air and are hardly to biodegrade. In recent years, great research interest has been focused on the detection and degradation of these pollutants, in which techniques that are able to detect these compounds in trace amounts are essential. This is because they can accumulate to a high concentration in human bodies through the food chain and cause severe diseases when the concentration exceeds the critical level, even when just in trace amounts in the environment
Reply »

Joerg (June 22, 2016 4:47 AM)
Dont you extract the PCBs with the sampling container madfrom hydrophobic polymers ?
Reply »